Jaguar with its marine turtle prey. Photo by: Benjamin Barca.

At first, an encounter between a jaguar (Panthera onca) and a green sea turtle (Chelonia mydas) seems improbable, even ridiculous, but the two species do come into fatal contact when a female turtle, every two to four years, crawls up a jungle beach to lay her eggs. A hungry jaguar will attack the nesting turtle, killing it with a bite to the neck, and dragging the massive animal—sometime all the way into the jungle—to eat the muscles around the neck and flippers. Despite the surprising nature of such encounters, this behavior, and its impact on populations, has been little studied. Now, a new study in Costa Rica’s Tortuguero National Park has documented five years of jaguar attacks on marine turtles—and finds these encounters are not only more common than expected, but on the rise.

“Although there are records of marine turtles predation by jaguars in other countries nowhere else the numbers of predated turtles are nearly as high. I think that the interaction in itself is very likely to be a normal predator-prey interaction,” lead author Diogo Veríssimo told mongabay.com. “But the quick increase in predation observed in Tortuguero that could be a symptom of an unbalance in the ecosystem.”

Over five years Veríssimo and his team recorded a total of 676 marine turtles killed by jaguars. The vast majority (over 99 percent) of those killed were green sea turtles, but jaguars also preyed on three hawksbill sea turtles (Eretmochelys imbricata) and one leatherback marine turtle (Dermochelys coriacea), the world’s largest. Over the five years, more and more sea turtles were killed by jaguars, rising from an average of less than 2 found per survey to over 5.

“With a minimum of 189 individuals predated in the last season, predation of adult turtles has now reached a magnitude never before recorded in a marine
turtle rookery,” the scientists write.

Why the sudden uptick in what is considered by biologists rare behavior?

“Several factors could be playing a role,” says Veríssimo. “One would be a potential decrease in other jaguar prey such as peccaries or deer, as a result of hunting by local populations. Another possibility is that jaguars are being driven towards the coast as habitat is cleared and fragmented around Tortuguero National Park.”

Green sea turtles are currently listed as Endangered by the IUCN Red List and are imperiled a large number of threats, including accidental bycatch, light pollution, beach development, and both legal and illegal harvesting of turtle eggs. Jaguars are less threatened than their oceanic prey, but are still listed as Near Threatened due to deforestation, prey decline, and targeting by ranchers. So, the rise in preying on endangered marine turtles by America’s biggest cat begs the question: what, if anything, should be done?

Veríssimo recommends more research and monitoring before any action is taken. Future research should especially focus on the park’s jaguar population, which has been little studied to date. He also notes that though the total number of marine turtles killed—676—may seem high, researchers should not see this as an alarming concern—yet.

“The nesting population of marine turtles in Tortuguero is one of the largest in the world and as such at the moment I do not think jaguar predation is a major threat. Furthermore, we need to remember that marine turtles from this population are still being harvested in Nicaragua in far greater numbers than those currently being predated,” he explains, “nonetheless it rests to be seen at what levels the jaguars predation starts to level off as the increase in recent years has been fast.”

Jaguar and marine turtle conservationists should begin sharing information, says Veríssimo, to “ensure that there is a landscape perspective when it comes to understanding of this predator-prey interaction.”

In the meantime, marine turtles will, as they always have, risk their lives in producing the next generation, and jaguars, consummate hunters, will take advantage of the oceanic reptiles’ sudden vulnerability. And nature will continue to surprise us.

A camera trap catches jaguars feeding on a sea turtle at night when the fateful encounter occurs. Photo courtesy of: Diogo Veríssimo. Green marine turtle corpse after being preyed on by a jaguar in Suriname. Photo by: Jeremy Hance. 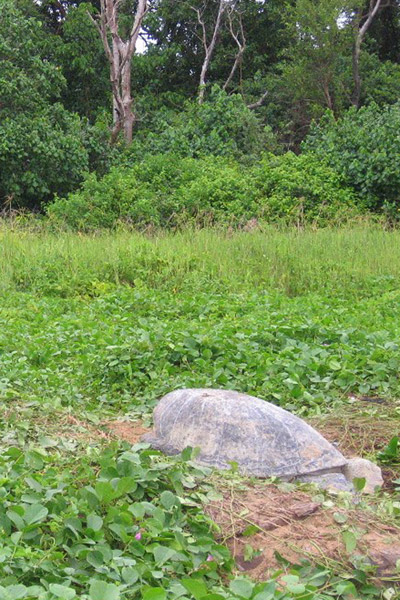 Green marine turtle corpse after being dragged in from the beach in Suriname. By the next day the jaguar had dragged it into the forest seen in the back. Photo by: Jeremy Hance.

(05/13/2012) Images of several jaguars, including cubs, have been captured by camera traps on a Colombian ranch that is well known among cat researchers for its diversity of felines.

Picture of the day: jaguars take self-portraits in Bolivia

(10/19/2011) A study by the Wildlife Conservation Society (WCS) in Bolivia’s Madidi National Park has produced 19 jaguar ‘self-portraits’ via digital cameras that snap photos of wildlife when they cross an infrared beam, known as camera traps. This is the most jaguars catalogued by camera trap study yet in Bolivia. “The preliminary results of this new expedition underscore the importance of the Madidi landscape to jaguars and other charismatic rainforest species,” said Dr. Julie Kunen, Director of WCS’s Latin America and Caribbean Program, in a press release.

Thousands of marine turtles slaughtered in Madagascar for food

(11/14/2010) Over 10,000 marine turtles are being killed in one region of Madagascar for food every year, according to a new study in Animal Conservation. Although fishing for marine turtles is illegal, it has not stopped local artisanal fishermen from pursuing four different endangered marine turtle species. “We conducted this study because we know this small-scale, artisanal fishing is going on despite it being illegal to catch turtles under Malagasy law,” Annette Broderick, from the Center for Ecology and Conservation (Cornwall) at the University of Exeter, said in a press release. “Because turtles are an endangered species, it’s important for us to know what’s going on in the region so we can work with the local community to find a sustainable way forward.”

(03/28/2011) The Pantanal spanning Brazil, Bolivia, and Paraguay is the world’s largest wetland—the size of Florida—and home to a wide-variety of charismatic species, such as jaguars, capybaras, and giant anteaters. However, the great wetland is threatened by expansion in big agriculture and an increasingly intensive cattle industry. Yet there is hope: a new study by Wildlife Conservation Society of Brazil (WCS-Brazil) researchers has found that cattle and the ecosystem can exist harmoniously. By replacing current practices with rotational grazing, cattle ranchers gain a healthier herd and more profits while safeguarding the ecological integrity and wildlife of the world’s largest wetland system. The study published in mongabay.com’s open access journal Tropical Conservation Science is a rare instance of a win-win situation.