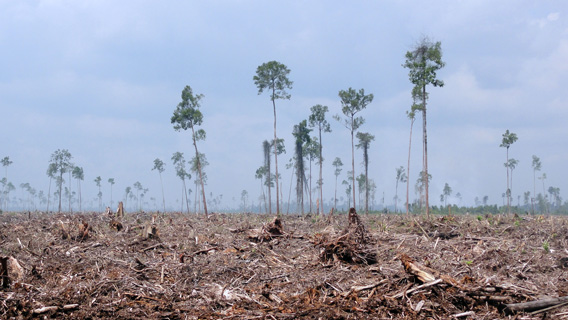 Peat draining and large-scale clearance of natural forest by APP wood supplier PT. Ruas Utama Jaya. Eyes of the Forest said the clearing occurred inside APP’s Senepis Tiger Sanctuary, but the paper giant says the clearing is in an area that was allocated for conversion — and signed off by the Indonesian government &#8212; in 2008. APP claims the Senepis Tiger Sanctuary — more than 85 percent of which belongs to another company — remains intact. © Eyes of the Forest / WWF-Indonesia

Asia Pulp & Paper (APP), a forestry giant that has been heavily criticized for destroying rainforests and peatlands in Indonesia, will temporarily suspend clearing of natural forest areas until conservation assessments have been conducted.

In a statement issued Tuesday, APP said the moratorium on forest clearing will take effect June 1 for concessions owned outright by its subsidiaries. APP said its “independently owned” pulpwood suppliers will be expected to come into compliance by December 31, 2014. APP had earlier pledged to cease conversion of natural forests by 2015, after missing previous commitments in 2004, 2007 and 2009.

APP called the move “the ‘next natural evolution’ of its sustainability strategy” and said it aims to adopt “internationally-recognized standards” for assessing High Conservation Value Forest (HCVF) areas. It added that the HCVF assessments “will be based on a multi-stakeholder approach” and adhere to “HCV Resource Network best practice”.

Once the surveys are complete, APP “will protect all identified HCVF areas as a result of the HCVF assessments.”

APP will “engage” with its independent suppliers to adopt the HCVF assessment protocol and “review and reevaluate supply agreements where HCVF assessments are not conducted.”

APP’s announcement appears to be part of a push to stem a recent exodus of major customers. Complaints lodged by green groups and scientists about its forestry practices have cost the paper giant hundreds of millions of dollars in contracts. APP has also been accused by authorities in Sumatra of illegal land clearing and criticized by human rights NGOs for social conflict in some of its concession areas.

But APP’s new policy wasn’t enough to win over its fiercest critic, Greenpeace, which is in the midst of a campaign to reform the forestry’s giant’s practices and has found evidence of illegal clearing.

“The small print of this latest APP commitment indicates that only a minority of its supply chain is to be included in today’s announcement,” Bustar Maitar, Head of Forest Campaign for Greenpeace-Indonesia, told mongabay.com, adding that APP failed to conserve areas previous audits classified as HCVF. “If APP were serious about its commitment to clean their supply chain of natural forest and peatland destruction, it would be easy to require compliance from all its suppliers immediately.”

“This announcement is a wasted opportunity. If APP were serious about reform it would address the issues of clearance of natural forests and peatland, as its sister company Golden Agri Resources, has done. By sidestepping these issues APP has just ensured it will continue to lose customers and tarnish the reputation of Indonesia’s forest sector around the world.”

Golden Agri Resources (GAR), the Singapore-based palm oil company that owns PT SMART, one of Indonesia’s largest palm oil producers, last year signed a comprehensive forest policy that prohibits conversion of land with more than 35 tons of carbon and requires free, prior informed consent (FPIC) in dealing with local communities. GAR, which said the agreement would have an “immaterial” impact on its bottom line, has since seen a big boost in its reputation internationally. The palm oil company had also been targeted by Greenpeace until it established the forest policy.

APP however hasn’t take the same tact according to Greenpeace, WWF, and other green groups, which charge it with engaging in an aggressive marketing campaign rather than enacting meaningful reform. A WWF report released late last year chastised APP for allegedly failing to uphold previous conservation commitments.

(03/07/2012) Less than a week after Greenpeace released evidence that protected tree species were being illegally logged and pulped at an Asia Pulp and Paper (APP) mill in Sumatra, a major certifier, the Program for the Endorsement of Forest Certification (PEFC), has lodged a complaint and asked for an investigation. In addition to PEFC’s move, the National Geographic Society (NGS), which was found to be sourcing from APP recently, has publicly broken ties with the company, and Greenpeace has handed over its evidence to Indonesian police who told the group there would be an investigation.

(02/15/2012) Beleaguered paper giant Asia Pulp & Paper was sharply criticized Wednesday for its claims that its operations are certified sustainable by independent auditors. WWF said its survey of certifiers and certification schemes shows that none apply to ‘the most controversial operations’ of APP’s suppliers: clearing of rainforests and peatlands that are home to endangered tigers, elephants, and orangutans. In responding to complaints from environmentalists that its operations are responsible for large-scale destruction of native forests, APP often touts various certification standards which it says demonstrate its commitment to sustainability. Yet the new WWF survey found that these standards don’t apply across all of the paper giant’s operations — APP’s suppliers in Indonesia continue to harvest and convert natural forests. Nor do the certification standards necessarily prove that APP’s forest management practices are ‘sustainable’.

Paper commitments for the Indonesian industry

(12/13/2011) The Indonesian group Asia Pulp & Paper (APP) has been the target of many NGOs for years due to its alleged negative impacts on tropical forests. This culminated in a spectacular campaign launched by Greenpeace in 2011 based on Ken “dumping” Barbie. The rationale was that toy brand Mattel was accused of using APP paper products linked to the clear-cutting of natural forests in the Indonesian archipelago. APP organized a counter-attack in the media with the daily publication of advertisements promoting its sustainable development practices. Journalists from all over the world were also invited to attend guided tours of APP concessions to demonstrate their conservation efforts, and a number of articles were subsequently written.

(11/16/2011) Greenpeace and Asia Pulp & Paper (APP), a giant global paper supplier, are locked in a heated battle over the activist group’s allegations that APP products contain fiber sourced from the destruction of forests in Indonesia. At stake is APP’s access to some of the world’s most lucrative markets. Until APP provides solid evidence refuting Greenpeace’s accusation that its pulp and paper production isn’t coming at the expense of natural forests in Indonesia, APP will have a difficult time winning over critics.

Barbie, Legos, other toys linked to destruction of Indonesia’s rainforests

(06/07/2011) Some of the world’s largest and most prominent toy-makers are sourcing their packaging materials from companies linked to large-scale destruction of Indonesia’s rainforests, alleges a new report from Greenpeace. The report, How APP is Toying with Extinction, is based on forensic analysis of toy packaging from Mattel, which manufacturers Barbie and Hot Wheels toys; Disney, which makes a variety of toys linked to its movies; Hasbro, which produces GI Joe, Star Wars, and Sesame Street toys and various games like Monopoly and Scrabble; and Lego, which makes the iconic plastic building blocks. The analysis found traces of mixed-tropical hardwood (MTH) and acacia fiber which are principally sourced from Asia Pulp & Paper (APP), an umbrella paper products brand that sources from several companies that have been linked to rainforest destruction in Sumatra.