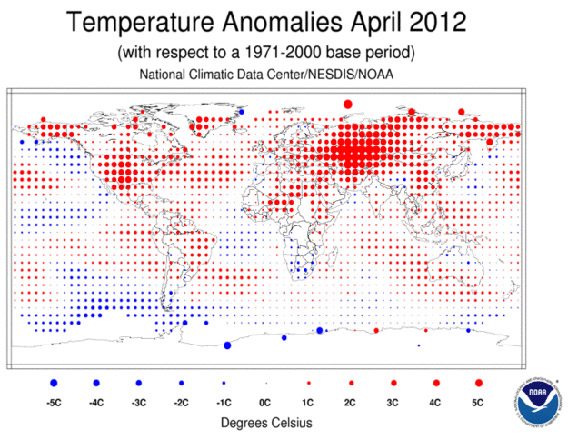 La Nina conditions, which generally bring colder temperatures to many parts of the world, ended last month resulting in the fifth warmest April since record-keeping began, and the hottest April yet in the terrestrial Northern Hemisphere, according to the National Oceanic and Atmospheric Administration (NOAA).

On land, worldwide, it was the second warmest April on record, while the oceans’ experienced the eleventh warmest. Global temperatures were 0.65 degrees Celsius (1.17 degrees Fahrenheit) above the 20th Century average.

While monthly and annual data interest climatologists, the study of global climate change depends on long-term trends. One such trend is that April 2012 marked the 326th month in a row where global temperatures have been above the 20th Century average. One has to go back to February 1985—just after U.S. President Ronald Reagan was sworn in for a second term—to find the last month that was below the average—and then only by 0.01 degrees Celsius (0.02 degrees Fahrenheit). One has to go back even further to find a month in which the oceans recorded temperatures below the 20th Century average: September 1976, just two months before Jimmy Carter won the presidency. To date, the last 427th months have all seen marine temperatures higher than last century’s average.

According to scientists, the world is heating up due to the greenhouse gas emissions produced by burning fossil fuels, destroying forests, and other human impacts. The warmest years to date are generally considered 2005 and 2010, while last year was the warmest La Nina yet recorded. Not surprisingly, the last decade was also the warmest on record. Global temperature records go back to 1880.