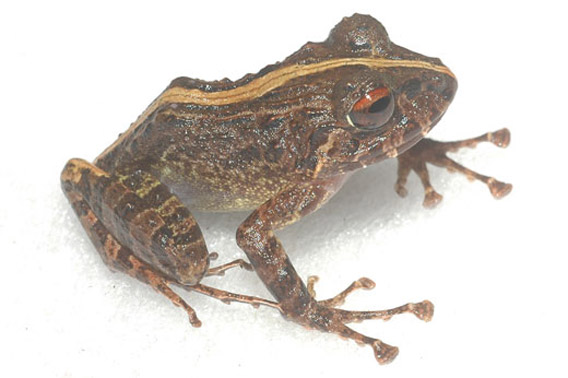 Two new frogs have been discovered on the Philippine island of Leyte during a biological survey last year by Fauna and Flora International, which also recorded a wealth of other species. Discovered in November on the island’s Nacolod mountain range, the frogs have yet to be named. The Philippines is one of the world’s global biodiversity hotspots, yet suffers from widespread deforestation and degradation.

“Many (environmental) institutions and funding agencies have written off the Philippines because we only have 20 percent of our forests left,” Aldrin Mallari, Philippine director with Fauna and Flora International, said at a recent forum. “Yet many of these species, even if they are threatened, have this resiliency.”

Mallari’s words were borne out this week by another announcement: the finding of a Dinagat bushy-tailed cloud rat (Crateromys australis) on the Philippine island of Dinagat, just southeast of Leyte Island. The Critically Endangered rodent hadn’t been recorded for nearly forty years and was feared to be extinct, but a researcher and her husband saw the nearly two-foot-long animal on several nights and were able to capture video of it.

The new frogs discovered on Leyte are in the Platymantis genus.

“These species inhabit the montane and mossy forests of the Nacolod Mountain Range in Southern Leyte province,” Mundita Lim, head of the Department of Environment and Natural Resources Protected Areas and Wildlife Bureau (DENR-PAWB), told the Philippine Star. “Both species differ markedly from other known species of Philippine Platymantis frogs by their body size, coloration patterns, and advertisement calls. The two species are allied to two different species groups, the Platymantis guentheri group and Platymantis hazelae group.”

Although the Philippines generally receives less conservation attention than its neighbors, 36 new species of plants and animals have been discovered in the country in the last ten years. Despite many environmental problems, the Philippines remains a mega-diverse country, meaning it is in a select group of countries that contain the bulk of the world’s species. A 2008 paper, “Hope for Threatened Tropical Biodiversity: Lessons from the Philippines” in Bioscience, argued that the Philippines was not a lost cause, but rather had seen important conservation progress in recent years, and should be reinstated as a global priority for conservation.

Some statistics from the paper “Hope for Threatened Tropical Biodiversity: Lessons from the Philippines”: