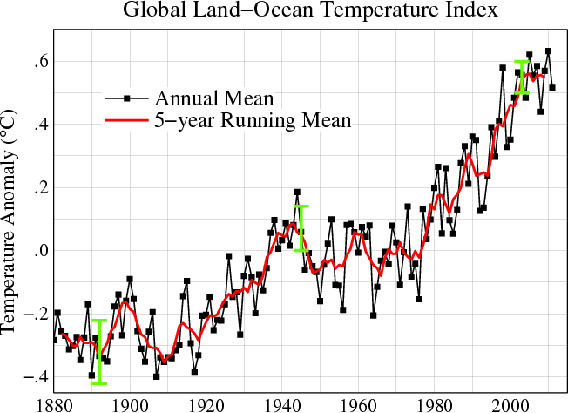 Line plot of global mean land-ocean temperature index, 1880 to present, with the base period 1951-1980. The black line is the annual mean and the red line is the five-year running mean. The green bars show uncertainty estimates. Graph by NASA Goddard Institute for Space Studies. Click to enlarge.

In 1872 the HMS Challenger pulled out from Portsmouth, England to begin an unprecedented scientific expedition of the world’s oceans. During its over three year journey the HMS Challenger not only collected thousands of new species and sounded unknown ocean depths, but also took hundreds of temperature readings—data which is now proving invaluable to our understanding of climate change.

Utilizing the temperature data from the HMS Challenger expedition and comparing it to contemporary temperatures, researchers writing in Nature Climate Change found that the oceans’ surface— where marine warming is most intense—saw temperature rise on average by 0.59 degrees Celsius (1.1 degrees Fahrenheit) over the past 135 years or so. This implies that oceanic temperatures have been rising for at least a century.

“The significance of the study is not only that we see a temperature difference that indicates warming on a global scale, but that the magnitude of the temperature change since the 1870s is twice that observed over the past 50 years,” explains lead author Dean Roemmich, University of California San Diego physical oceanographer. “This implies that the time scale for the warming of the ocean is not just the last 50 years but at least the last 100 years.”

Prior research has shown that 90 percent of the heat added to the atmosphere has ended up in the oceans, at least since the 1960s. Roemmich told LiveScience that this implies, “the ocean temperature is probably the most direct measure we have of the energy imbalance of the whole climate system.”

While the HMS Challenger took temperatures at over 300 stations with mercury, pressure, and resistance thermometers, today some 3,500 free-floating Argo robotic probes roll through the seas gathering temperature data.

Temperatures globally, including both land and sea, have risen about 0.8 degrees Celsius (1.44 degrees Fahrenheit) since the first decade of the 1900s. The rate of warmth has doubled since 1950. Scientists overwhelmingly agree that climate change is occurring due to greenhouse gas emissions from burning fossil fuels.