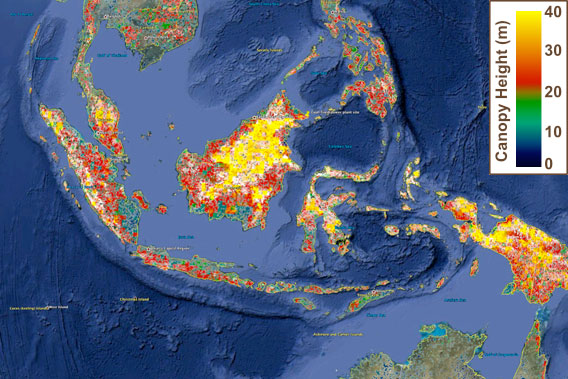 NASA researchers have released a Google Earth version of a map showing the height of the world’s forests.

The map was first published in 2010 by Michael Lefsky of Colorado State University and updated last year by Marc Simard of NASA’s Jet Propulsion Laboratory. It is based on data from the Geoscience Laser Altimeter System (GLAS) from the ICESAT satellite and the Moderate Resolution Imaging Spectroradiometer (MODIS) on NASA’s Terra and Aqua satellites, and incorporates additional elevation data from the Shuttle Radar Topography Mission (STRM) and climatology information from the Tropical Rainfall Measuring Mission (TRMM) and the Worldclim database. The updated map has a higher resolution than the original, allowing users to see variations in tree height within an ecosystem, like the differences between seasonally flooded várzea forest and terra firme rainforest in the Amazon. 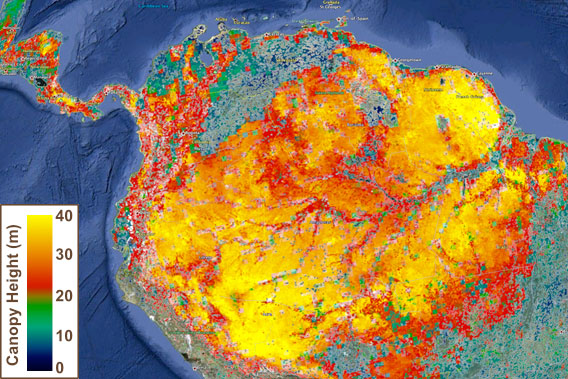 Canopy height in the Amazon rainforest.

According to the map, forests are generally taller in the tropics, with the exception of pockets in the Pacific Northwest and eastern Australia.

“In general, forest canopy heights are highest near the equator and decrease the closer forests are to the poles,” wrote Adam Voiland on NASA’s Earth Observatory site. “One exception: the temperate rainforests in eastern Australia, where stands of eucalyptus, one of the world’s tallest flowering plants, reach similar heights. The map shows that temperate conifer forests in the Pacific Northwest—full of Douglas fir, western hemlock, redwood, and sequoia—are home to exceptionally tall trees that grow fairly far from the equator as well. In contrast, boreal forests in Canada, northern Europe, and Russia (comprised mainly of spruce, fir, pine, and larch) tend to have canopy heights less than 20 meters (66 feet).”