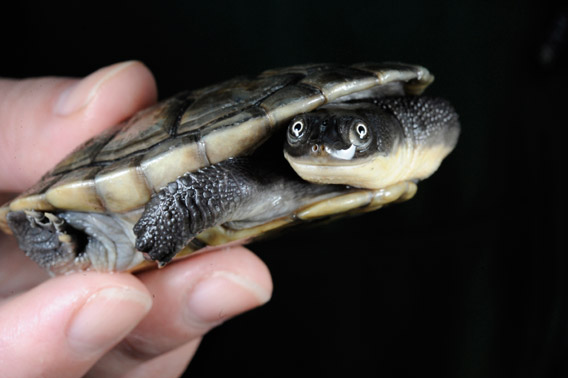 Roti snake island turtle, which is number 12 of the world’s most endangered turtles, are being captive bred at the WCS’s Bronx Zoo. Photo by: Julie Larsen Maher/WCS.

The Wildlife Conservation Society (WCS) has pledged to work with all of its institutions to save at least half of the world’s most 25 endangered turtles as listed in a report by WCS and the Turtle Conservation Coalition last year. The program will include both conservation work in the field as well as participation from WCS’s zoological institutions for captive breeding and future reintroductions. Even with WCS’s ambitious program, however, it is likely this century will see a number of turtle extinctions.

“Only by garnering the vast knowledge and resources from across the whole of WCS can we successfully address the threats to the world’s endangered turtles,” Dr. Elizabeth Bennett, Vice President of Species Conservation at WCS said in a press release. “WCS’s long history and current broad and deep expertise position us to rise to this challenge, and to conserve the threatened species across this ancient, diverse, and fascinating lineage.”

Although having been around for over 200 million years, turtles worldwide are currently being decimated worldwide by habitat loss and the illegal wildlife trade, largely driven by demand in East Asia where turtle parts are used for food and traditional medicine. The illegal pet trade and pollution also pose problems for turtles. Currently over half of the world’s turtles (including freshwater species and tortoises) are threatened with extinction, making the group even more vulnerable than amphibians which biologists consider to be facing a mass extinction crisis of their own.

The Top 25 Most Endangered Turtles list includes four species from South and Central America, three from Africa, and one from Australia, but Asia is the epicenter for turtles in trouble with 17 of the top 25 species, or 68 percent. The numbers are even more alarming if one looks only at the top ten: eight of the top ten are in Asia, and six of these reside in China.

To kick-off its effort, WCS will be focusing on conservation projects for four species in the field: the Burmese starred tortoise (Geochelone platynota), the Burmese roofed turtle (Batagur trivittata), the Southern River terrapin (Batagur affinis), and the Central American river turtle (Dermatemys mawii).

Meanwhile, the organization is planning captive breeding programs for other species with plans to ultimately re-introduce individuals back into their native habitat.

For some turtles, however, it may be too late. Only one Abdington Island tortoise (Chelonoidis abingdonii) survives today; ‘Lonesome George,’ as he is known, is quite simply the last of his species. There are only two Yangtze giant softshell tortoises (Rafetus swinhoei) in captivity and two known in the wild. Researchers hope the captive pair will breed, but to date all the eggs laid have been infertile. 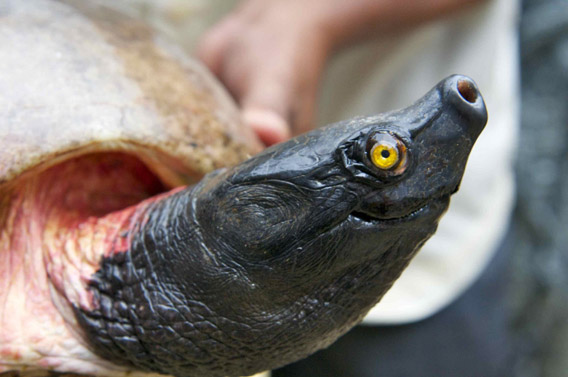 Northern river terrapin is number 4 on the most endangered turtles list. Once found throughout Southeast Asia, this species has vanished from many countries due to overexploitation for food and medicine. Photo by: WCS. 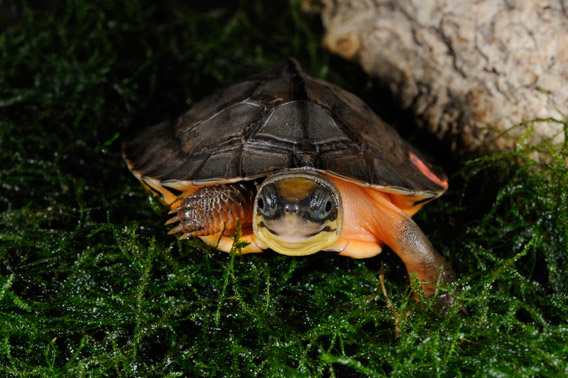 (04/16/2012) At a seemingly small residence in Florida, lives the world’s greatest turtle collection. The Chelonian Research Institute contains a specimen of nearly every species of turtle found worldwide and many live species. Founded and headed by Dr. Peter Pritchard, the institute is both a research center and an active museum.

Picture of the day: nearly-extinct turtle released into the wild in Cambodia

(01/18/2012) Only around 200 southern river terrapins (Batagur affinis) survive in the wild, but today at least the species got some good news. A female terrapin was released back into the Sre Ambel River with much fanfare after being caught by a local fishermen in Cambodia.

(09/14/2011) The number of sea turtles accidentally caught and killed in United States coastal waters has declined by an estimated 90 percent since 1990, reports a new study published in the journal Biological Conservation. The authors, including researchers at Duke University and Duke University, say regulations to reduce bycatch are responsible for the decline.

(05/12/2011) Despite decades of conservation work, populations of North America’s smallest turtle, the bog turtle (Glyptemys muhlenbergii), is continuing to decline. Habitat destruction, invasive plants, road-kill, and the illegal pet trade have all played a role in the bog turtle historic decline, but researchers are now reporting increased mortalities across bog turtle populations, bringing fears of disease or an as-yet-unnamed environmental issue.