Cinderella animals: endangered species that could be conservation stars 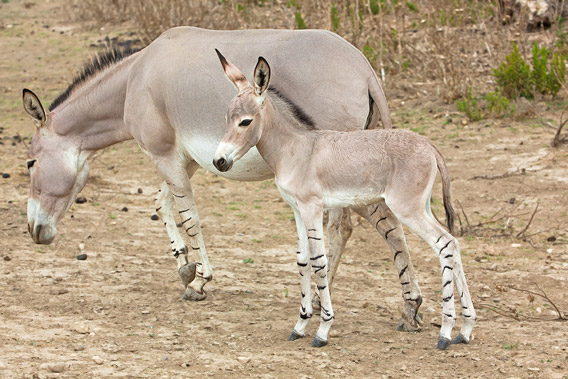 Somali wild ass and mother in nature. The African wild ass could be a conservation flagship species according to a new paper. Photo by: Bigstock.

Too much focus on “flagship species”?

Flagship species are animals used by conservation groups to raise funds; these species are almost always mammals, large, and appealing to the general public, often defined as ‘cute.’ This trend has long faced criticism: some researchers argue that in an age of mass extinction focusing on a few mammals trivializes the scale of the problem and leaves the bulk of the world’s threatened species without targeted protection.

“Flagship species campaigns remain a key fundraising tool for international conservation NGOs because they strongly resonate with
the general public,” write the authors of the study in Conservation Letters.

The researchers examined fundraising efforts by 59 international conservation groups working in developing countries and found that in total 80 flagship species were utilized. Tigers and elephants (both Asian and African) were the most popular.

But perhaps most disconcerting was that conservation NGOs took little note of species’ threat level.

“The IUCN Red List status of these threatened species was not important [in conservation groups’ flagship species], so that Critically Endangered species were no more likely to be selected as flagships than Vulnerable species,” the researchers write.

While the researchers admit that their are numerous problems with the flagship strategy, they also note that it is effective in raising funds and attracting new supporters.

According to the paper, one simple solution to the flagship species problem is to expand the number of such icons. This would help support conservation in new regions as well as protect hugely imperiled animals, the paper argues.

To this end, the researchers surveyed the world’s 1,098 mammals for those that would fit general flagship criteria: large-bodied and forward facing eyes (a sign of appeal or ‘cuteness’). The researchers found 183 species that have not been utilized by conservation groups, over twice as many mammals as conservation groups currently highlight according to the study.

“The approach of NGOs remains overly conservative, so that only a few well-known species receive the bulk of the money raised. In response, we have shown that there are a number of currently neglected mammal species that are both highly threatened and potentially appealing to the public,” lead author Robert Smith with the Durrell Institute of COnservation and Ecology (DICE) at the UNiversity of Kent said in a press release. They call these “cinderella species” after the fairy-tale of the long-neglected commoner who overnight becomes a princess.

From these 183 Cinderellas, the study chose five of the best representatives, each of them listed as Critically Endangered, to highlight the potential of broadening the flagship strategy to more species: the Talaud bear cuscus (Ailurops melanotis) from Indonesia, Pennant’s red colobus (Procolobus pennantii) of West Africa, the tamaraw or Mindoro dwarf buffalo (Bubalus mindorensis) from the Philippines, the African wild ass (Equus africanus) from the Horn of Africa, and the pygmy raccoon (Procyon pygmaeus) from Mexico.

“Any organization with a biodiversity-based mission has a duty to broaden the conservation benefits of their fundraising. […] This is why we need to identify additional species for use in these traditional international campaigns,” the researchers write.

Humanity knows less than 15 percent of the world’s species

(08/23/2011) Scientists have named, cataloged, and described less than 2 million species in the past two and a half centuries, yet, according to an new innovative analysis, we are no-where near even a basic understanding of the diversity of life on this small blue planet. The study in PLoS Biology, which is likely to be controversial, predicts that there are 8.7 million species in the world, though the number could be as low as 7.4 or as high as 10 million. The research implies that about 86 percent of the world’s species have still yet to be described.

The glass is half-full: conservation has made a difference

(08/11/2011) Don’t despair: that’s the message of a new paper in Trends in Ecology and Evolution, which argues that decades of conservation actions at multiple scales have had a positive impact for many of the world’s endangered species. While such actions have not yet turned back the tide of the current mass extinction crisis, they have achieved notable successes which often get lost in the gloom-and-doom news stories on biodiversity declines. According to the paper, conservation actions take place on three scales. Microscale conservation focuses on a single species or ecosystem; mesoscale means conservation cooperation between a number of countries, such as efforts to curb the illegal wildlife trade or protect wide-ranging species; and finally macroscale means global organizations or campaigns, such as those that pressure multinational corporations to become more biodiversity-friendly.