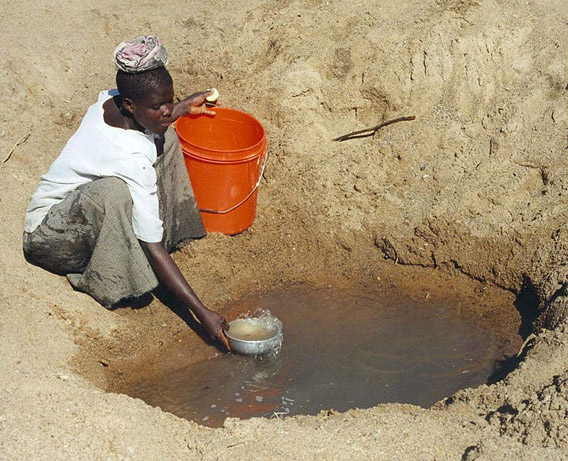 Access to clean water is most difficult in Africa. Here a woman in Tanzania gathers water from a hole in a riverbed. Photo by: Bob Metcalf.

Over the past two decades (1990-2010) over two billion people have received access to improved drinking water, bringing the current number of people worldwide who have access to better water up to 89 percent. This accomplishment meets the UN’s Millennium Development Goal’s (MDG) target of cutting in half the amount of people worldwide who do not have access to safe and sustainable drinking water. According to a report by UNICEF and the World Health Organization (WHO), the goal was met in 2010, five years before its target year of 2015.

“Today we recognize a great achievement for the people of the world. This is one of the first MDG targets to be met. The successful efforts to provide greater access to drinking water are a testament to all who see the MDGs not as a dream, but as a vital tool for improving the lives of millions of the poorest people,” UN Secretary General, Ban Ki-moon, said in statement.

Even as the goal has been met earlier, officials were quick to warn that the job on clean water was not finished. Around 11 percent of the world’s population, nearly 800 million people, still do not have access to clean and sustainable drinking water, making them vulnerable to disease.

“We have reached an important target, but we cannot stop here,” Ki-moon added. “Our next step must be to target the most difficult to reach, the poorest and the most disadvantaged people across the world. The United Nations General Assembly has recognized drinking water and sanitation as human rights. That means we must ensure that every person has access.”

Other Millennium Development Goals (21 targets were set in 2000) proven more elusive. One target pledged the world would halt the loss of biodiversity by 2010, but the loss of the world’s species has not halted and has likely worsened since the goals were made. Another goal, improved sanitation access for 75 percent of the world, is also likely to be missed by its target date of 2015. Currently, 37 percent of the global population (around 2.5 billion people) does not access to improved sanitation access, and that percentage is expected to go up, not fall as hoped, by 2013.

(04/07/2011) A new landmark study not only proves that adding more species to a freshwater stream linearly increases the ecosystem’s ability to clean pollutants, but also shows why. The study, published in Nature found that by increasing the biodiversity of a lab controlled mini-stream from one algae species to eight caused the ecosystem to soak up nitrate pollution 4.5 times faster on average. To conduct the experiment, researchers used plastic to create 150 mini model streams. Molding the plastic, they recreated real stream-like habitats such as pools, runs, and eddies. Different species of algae gravitated toward particular mini-habitats, creating special ecological niches and allowing more of the stream to be utilized by the algae for soaking up the nitrate pollution. Less utilization of the available habitats resulted in a dirtier river and vice-versa.