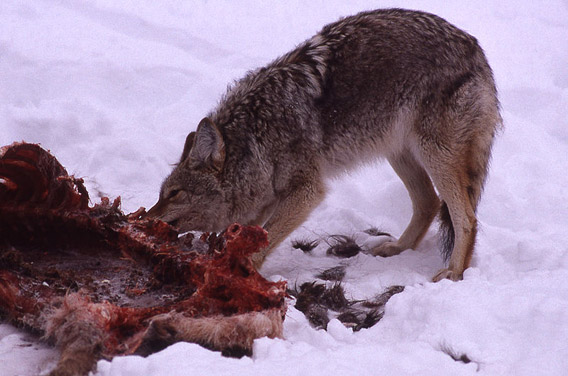 Not long ago, geologically speaking, coyotes (Canis latrans) were bigger and more robust than today’s animals. In the late Pleistocene, over 10,000 years ago, coyotes rivaled grey wolves (Canis lupus) in size. But, according to a new paper in the Proceedings of the National Academy of Sciences (PNAS), coyotes shrunk significantly following the megafaunal extinction—including the disappearance of big herbivores like giant sloths and mastodons and predators like the smilodon—due to changes in prey and predator competition.

Comparing bones from prehistoric coyotes (the extinct subspecies Canis latrans orcutti) to modern coyotes, researchers found that on average prehistoric coyotes were 6 to 14 pounds heavier with a full weight (nearly 50 pounds at maximum) almost that of gray wolves. Although the physical changes in coyotes occurred during the melting of the Ice Age, the researchers do not believe climate change caused the shrinkage of coyotes, since modern coyotes are not different sizes when living in warmer or colder latitudes.

“If living coyotes do not follow a simple pattern of larger body size in colder climates […] and we assume that this pattern was not different in the Pleistocene, then end-Pleistocene temperature change would not cause the body size changes seen here,” the researchers conclude.

So, what caused coyotes to shrink? The researchers suggest a combination of a decline in big prey species and less predator competition.

“In the Pleistocene, there were many prey species from which to choose, including horses, sloths, camels, llamas, and bison. Juveniles of one
or more of those large-bodied species may have been suitable prey for coyotes,” the authors write. In addition, Pleistocene coyote jaws sported “increased bone-cracking and meat-shearing capabilities” for taking on these bigger, tougher prey animals. The loss of such diverse and large prey may have pushed coyotes to evolve a new niche for tackling smaller prey, like rabbits and rodents, and carrion.

In the Pleistocene, as well, coyotes not only had to deal with their long-term rivals, the grey wolf, but also the giant dire wolf (Canis dirus) and the smilodon (Smilodon fatalis). The extinction of the dire wolf and smilodon likely upset the balances between predators. Coyotes moved from a “more wolf-like role in the environment” to their present state.

The theory that coyotes responded not to climate change but prey-predator removal is buoyed by recent studies that show considerable changes in coyote behavior when wolves are present, including larger pack sizes for protection and increased reliance on heavier prey due to scavenging wolf kills.

“This study shows that relatively rapid evolution in a large mammal can be attributed to biotic interactions,” the authors write, concluding that, “both modern ecosystems and Pleistocene ecosystems highlight the importance of species interactions, revealing the delicate balance that exists in both carnivore–carnivore and predator–prey interactions. Eradication of a single (or multiple) carnivore species has profound effects on the remaining species.”

CITATION: Julie A. Meachen and Joshua X. Samuels. Evolution in coyotes (Canis latrans) in response to the megafaunal extinctions. PNAS. 2012.

(12/07/2010) Scientists have discovered an extinct massive stork, standing nearly 6 feet tall (1.8 meter) and weighing 35 pounds (15 kilograms), which would have shared the island of Flores with the ‘hobbits’—dwarf hominin species known as Homo floresiensis—reports the BBC. According to the researchers the meat-eating stork was big enough to prey on young Homo floresiensis, and stood about 2 and a half feet (0.8 meters) above adult hobbits.

Monster turtle killed off by man

(08/17/2010) Researchers have linked another extinction to human beings: this time of a massive prehistoric horned turtle. Prehistoric turtles in the Meiolania genus were thought to have vanished some 50,000 years ago. However, scientists have found a new species that was likely wiped out by human hunters much more recently.

(01/21/2010) For over a century and a half researchers have debated whether humans or climate change killed off Australia’s megafuana. A new paper in Science argues with new evidence that Australia’s giant marsupials, monstrous reptiles, and large flightless birds were brought to extinction not by an unruly climate, but by the arrival of humans.