Tropical countries may face a risk of ‘peak timber’ as continued logging of rainforests exceeds the capacity of forests to regenerate timber stocks and substantially increases the risk of outright clearing for agricultural and industrial plantations, argues a trio of scientists writing in the journal Biological Conservation. The implications for climate, biodiversity, and local economies are substantial.

Reviewing an extensive body of recent scientific literature, Philip Shearman of the University of Papua New Guinea and Australian National University, Jane Bryan of the University of Papua New Guinea and the University of Tasmania, and William F. Laurance of James Cook University conclude that dominant harvesting practices in tropical forests do not allow enough time for forestry recovery, leading to significant degradation of biodiversity and carbon stocks. The researchers extend their argument to conventional logging approaches as well as “sustainable forest management” techniques like reduced-impact logging (RIL), which aim to cut collateral damage to the forest from selective logging.

“The recovery time taken for logged forest to resemble primary rainforest in biomass, timber volume and species diversity has been variously estimated at 45–100 years, 120 years, and 150–500 years,” they write. “Larger rainforest trees can range in age from many decades to a millennium or more, illustrating that recovery of large trees in logged forests requires far more than the nominal 30–35 year logging cycles commonly applied in the tropics.”

Shearman and colleagues says this inherent lack of sustainability motivates loggers to continually move into virgin forest areas to maintain timber production. Eventually loggers will find it harder and harder to find high value tropical forests to log, say the authors, pointing to several Asian countries — including Malaysia, Thailand, Laos, the Philippines, and the Solomon Islands — which have already seen their timber production peak.

Shearman and colleagues use the Solomon Islands as a case study for the fate that can befall tropical countries that rely heavily on old-growth forest logging to produce raw-logs, which are “generally absent” from secondary forests.

“For nearly a decade, the nation had been warned that the volume of timber annually harvested from native forests was too high and, if unchecked, that timber stocks would be seriously depleted by 2012,” they write. “In 2009, the Central Bank of the Solomon Islands asserted that exhaustion of timber stocks had arrived even earlier than predicted and its economic consequences were likely to be severe.” 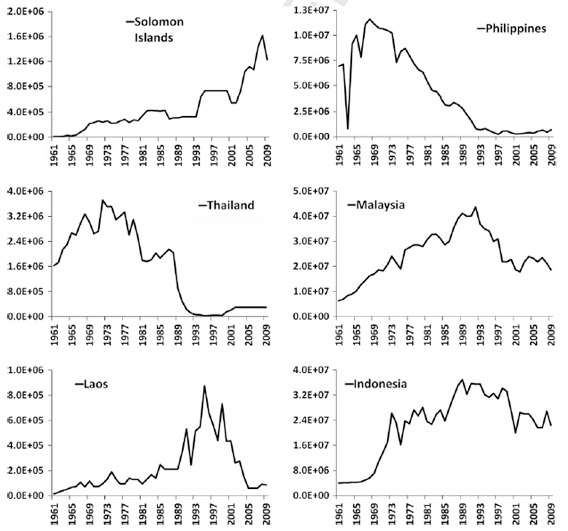 The scientists note that even rich countries have struggled to successfully implement “sustainable” forestry in the tropics, where valuable trees occur at a lower density than in temperate regions due to the high levels of biodiversity.

“Even in north Queensland, Australia, where advanced stand-yield models were eventually used to set annual timber quotas and the Queensland Forestry Department was heavily subsidized by government revenues, timber yields declined sharply from the 1960s to 1980s, as virgin or near-virgin forests were exhausted,” they write. “If sustainable logging largely failed in north Queensland, what chance does it have in most developing nations, where economic pressures are paramount and a range of other complications, such as poor enforcement of environmental regulations, weak or non-existent land tenure, and often-high discount rates, further militate against sustainable forest management?”

The experience in Australia seems to suggest that certification schemes based on first-time logging of primary tropical forests would require extended recovery times — upwards of 50 years — to be considered remotely sustainable. Like other resource-extracting industries, the logging sector tends to overcapitalize and overexploit.

“Having lower harvest intensities and longer rotation times becomes very difficult under these circumstances,” Laurance told mongabay.com via email. “It’s usually about ‘cut and run’, which is the pattern one really sees now with the Malaysian and other logging multinationals. This is fine for the multinationals but bad for timber-producing countries.”

Selective logging can be damaging in and of itself to forest ecology, but even more worrying for the authors is that logging in any form substantially increases the risk of complete forest clearing.

“[Rigorously implemented RIL] fails to address the insidious problem that, in most parts of the world, logging catalyses much deforestation,” they write. “Across tropical Africa, Asia, and the Americas, labyrinths of logging roads have opened up vast swaths of formerly remote forest for colonization, hunting, illegal mining and other destructive activities.”

Clearing of previously logged forest is particularly acute in Indonesia, where palm oil producers and pulp and paper companies have converted vast swathes of land for plantations. The authors note that Indonesia’s recent decision to exclude some 35 million hectares of logged-over secondary forest from their moratorium on new concessions for plantations was in part driven by accessibility granted by logging roads.

Logging is expected to figure prominently in a climate change mitigation measure known as reducing emissions from deforestation and degradation (REDD), which is currently under discussion in international climate talks. The concept originally aimed to fund relatively conventional forest conservation, but has since been expanded to REDD+ to include activities that degrade forests and therefore produce carbon dioxide. REDD+ may involve logging in two ways: providing funds to prevent it outright in a project area or acting as a form of subsidy to shift conventional logging practices toward less damaging ones (REDD+ compensation is based on reductions in emissions relative to a predetermined baseline). The authors make the case that because any form of logging degrades tropical forest, “REDD+ funds should be directed at initiatives designed to keep loggers and their associated road networks out of forests, rather than merely modifying logging operations.”

“Compensating governments not to log is arguably the easiest and most practical means to reduce greenhouse-gas emissions from the forestry sector, whereas paying to restore logged forests in regions, where their degradation continues apace is difficult to justify.”

The authors also highlight opportunities to directly tackle tropical forest logging, including bans on raw-log exports that have been adopted by many countries, reducing annual allowable cuts and extending rotation times, eliminating barriers to community ownership of forests through land tenure reform, cutting subsidies that favor industrial forestry, and establishing protected areas where logging is prohibited. Shearman, Bryan, and Laurance conclude that unless the logging industry undergoes fundamental changes, “logged tropical forests will continue to be overharvested and, far too frequently, cleared afterward, leading to an inevitable global decline in native timber supplies.”

The impacts could be dire for global ecology as well as forest-dependent economies. The authors compared it to concerns in other sectors.

“It has become common these days to speak of ‘peak oil’ and ‘peak phosphorus’. In the tropics, we assert, we should also begin seriously to consider the implications of ‘peak timber’.”

(10/17/2011) Aged, living trees are essential for over 1,000 birds and mammals that depend on such trees for nesting holes, according to a study in Frontiers in Ecology and the Environment. In much of the world, tree-nesting animals depend on holes formed through maturity and decay—and not woodpeckers—requiring standing old trees.

(09/26/2011) A new survey recorded 125 birds in Papua New Guinea’s Waria Valley, of which an astounding 43 percent were endemic to the island. The survey, published in mongabay.com’s open-access journal Tropical Conservation Science, was the first of its kind for the rainforest-studded valley and found that bird populations were most diverse and abundant in primary forests. The bird surveys were carried out in four different habitats including primary forest, primary forest edges, secondary forest edges, and agricultural landscape.

(09/14/2011) Old growth rainforests should be a top conservation priority when it comes to protecting wildlife, reports a new comprehensive assessment published in the journal Nature. The research examined 138 scientific studies across 28 tropical countries. It found consistently that biodiversity level were substantially lower in disturbed forests.