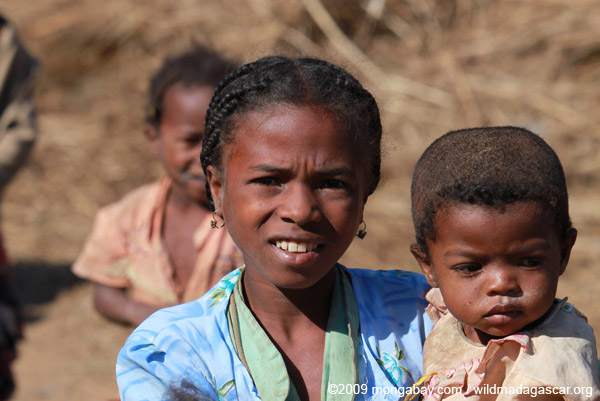 Children in Madagascar. Seventy percent of Malagasy people suffer from malnutrition. Photo by: Rhett A. Butler.

Last year saw the highest average food prices since recording began in 1990, according to the Food and Agriculture Organization’s (FAO) Food Price Index. The Food Price Index’s average for the year was 228 points, 28 points higher than the past record set in 2008.

“International prices of many food commodities have declined in recent months, but given the uncertainties over the global economy, currency and energy markets, unpredictable prospects lie ahead,” said FAO Senior Grains Economist Abdolreza Abbassian.

Fortunately by the end of the year prices of cereals, sugar, and oils had dropped due to a good harvest, less demand, and a stronger U.S. dollar.

Given the complexity of world markets and agriculture, experts have pointed to a number of reasons behind current food prices including higher consumption of meat, dairy, and eggs; the commodity boom; fresh water scarcity; soil erosion; competition over land with biofuels; growing human population; and climate change linked to extreme weather events that have devastated some crops.

Currently, the UN estimates that one billion people in the world are going hungry, nearly 14 percent of the world’s population.

(12/06/2011) The world can simultaneously improve food security and save tropical forests by better optimizing land use, factoring in the true costs of biofuels, boosting yields on existing farmland, encouraging production away from forest frontiers, and supporting efforts to develop more sustainable community roundtables, concludes a new report released Monday by the National Wildlife Federation.