Wolverines live up to tough reputation 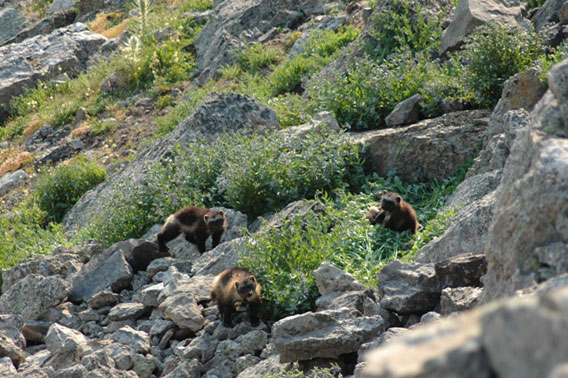 In the first X-Men film, the comic book character Wolverine is asked if it hurts when his claws retract from his knuckles. His unflinching response: “Every time.” The real wolverine (Gulo gulo) is just as tenacious with new research proving it is a “winter endurance athlete.” Eight years of radio-tracking 30 individual wolverines in the Rocky Mountains has provided an abundance of new data about the world’s largest member of the weasel family, including that the feisty mammals survive year-round in harsh, snowy conditions 9,000 feet above see level. Although immeasurably tough, the animal is nearly extinct in the lower 48 states of the U.S.

“They are the winter endurance athletes of the animal world. We were impressed by their constant movements across large areas of snow-covered and incredibly rugged terrain,” said Steve Cain of the National Park Service.

The study published in the Journal of Wildlife Management found that wolverines regularly patrol a vast mountain territory. In fact the territories of a lone male can span 500 square miles (1,294 square kilometers), an area larger than a grizzly bear’s. Wolverines also cover their harsh territory rapidly: one wolverine was recorded crossing the Tetons in winter in just a few hours. The researchers found that wolverines covered a distance equal to the circumference of their territory in less than a week. With broad five-toed paws, wolverines can bound through snow without sinking in, allowing them to hunt, scavenge, and roam year-round. They cache meat beneath boulders and snow as they travel. However, there are perils to this mountain lifestyle, the study recorded the death of two wolverines in avalanches. But this is the life for which wolverines are built.

“Wolverines selected high-elevation areas near alpine tree-line where a mix of forest, meadow, and boulder fields were present, deep snow-cover existed during winter, and low temperatures near freezing can occur throughout the year,” the authors write. “Persistence in these areas where the growing season is brief requires large home ranges that are regularly patrolled, a social system that provides exclusive access to resources, and low densities. These characteristics, along with low reproductive rates, are prevalent throughout the species range, indicating that wolverines are specialists at exploiting a cold, unproductive niche.”

With the Latin moniker Gulo gulo, which means “glutton glutton”, wolverines are known as voracious hunters and scavengers. The study confirmed an incident of a wolverine challenging a grizzly bear ten times its size over an elk carcass.

Notably the study also recorded the first wolverine in Colorado in nearly a hundred years.

“We learned that wolverines are adapted to eke out a living in very harsh conditions,” said Robert Inman, conservationist for the Wildlife Conservation Society (WCS). “As a result, they naturally exist in low numbers and reproduce slowly.”

There are at most 300 wolverines in the continental U.S. Hunted and poisoned as vermin for decades, they still face a number of threats. Today the lower-48 wolverines, a distinct population, sits on the Endangered Species Act’s candidate list along with hundreds of other imperiled species. The candidate list is , a Kafkaesque designation where species can wait decades for protection, sometimes going extinct first. The wolverine may not have much time: a recent study found that climate change could decrease suitable habitat for wolverines 25 percent by 2048 and 66 percent by 2099.

(11/28/2011) A new species of omnivorous mammal has been found in Cuc Phuong National Park, Vietnam. A part of the weasel family, the new species is known as a ferret-badger, a strange subfamily of mammals that have been little-studied by researchers. Smaller than proper badgers, ferret-badgers have elongated faces and long bushy tails.