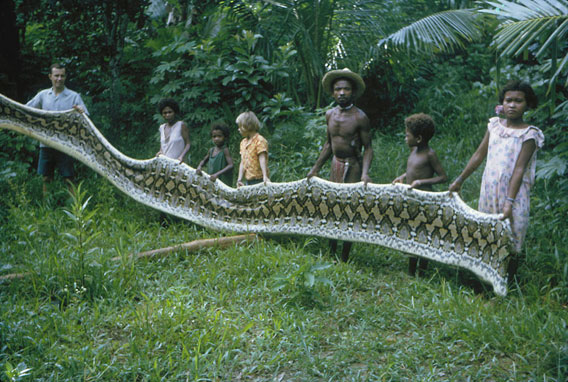 Humans have an ambivalent relationship with snakes. The legless reptiles are often feared and reviled, becoming stand-ins for the Devil and movie monster characters; yet many people have grown to love snakes, raising large, even dangerous, specimens as pets. Now, new research suggests that the ecological role between snakes and humans, as well as other primates, is more nuanced than expected. After spending decades living among the Agta Negritos people in the Philippines, anthropologist Thomas Headland has found that the hunter gatherer tribes were quite commonly attacked by reticulated pythons (Python reticulatus), while the people themselves had no qualms with hunting, killing, and consuming python.

“We know little […] about the dangers that snakes actually posed to extinct hominins or contemporary humans with prehistoric
lifestyles,” Headland and co-author, Harry W. Greene, write in a new paper in the Proceedings of the National Academy of Sciences (PNAS). To decipher how snakes and humans may have interacted in the deep past, Headland interviewed 120 indigenous Agta Negritos adults about their interactions with reticulated pythons.

Until very recently, the Agta Negritos lived as hunter-gatherers in the forests of Luzon Island. Today colonists, logging companies, and mining companies have pushed the tribe, and its culture, to near-extinction. But when Headland arrived in the 1960s the Agta Negriots were still living a life far removed from the modern world.

“They were preliterate, lived in small kin-related groups, slept in tiny temporary shelters, foraged in old-growth rainforest, and ate wild meat daily,” writes the authors. Dependent on the rainforest, the tribes also had to face its dangers: reticulated pythons are the world’s longest confirmed snakes, growing up to 28 feet (8.5 meters) in length (though the heaviest snake remains the green anaconda (Eunectes murinus). Large pythons are known to prey on monkeys and pigs, but reports of attacks on people are not particularly common.

Yet according to Headland’s interviews, a quarter (26 percent) of Agta Negritos men had been attacked by a reticulated python in the past, most bearing the scars to prove it. Women were attacked much less frequently, but since men spent their time hunting in the forest they were more likely to run into a python, an encounter that could prove deadly for either party. In all, the authors believed that attacks occurred every 2-3 years.

“Men generally were struck [by pythons] while walking in dense rainforest seeking game and useful plants, and they thwarted attacks by dispatching snakes with a large bolo knife or homemade shotgun,” the authors write, noting that the Agta Negrito are physically small, with the average man weighing less than a hundred pounds (44 kilograms).

Headland also confirmed six known fatalities of Agta Negrito people by pythons between 1934 and 1973. In one chilling case, a python was found after killing two children. The father killed the snake while it was in the midst of devouring a third child headfirst, who survived. Those killed also included full-grown adults. The authors believe that fatalities would likely have been much more common if the hunter-gatherers did not have access to iron knives and guns.

Yet the Agta Negriots also posed a threat to the snakes. They ate pythons, yet interestingly no other snakes on the island. They usually targeted small pythons, but in some cases killed large ones. At one point, Headland witnessed tribal members skinning a massive female python over 22 feet (6.9 meters) long in under an hour. The authors write that snakes are “valuable prey” because they are not toxic to eat, rarely run away, and “are easily dispatched with
simple weapons.” By killing snakes and viewing their stomach contents, the Agta Negriot would have also learned to view pythons as ecological competitors for prey animals.

Furthermore, the study catalogs recorded incidents of snakes preying on non-human primates, such as monkeys and vice-versa, noting that a wide-variety of snakes around the world prey on many different primates, and that a number of monkey species have been known to eat, kill, or just harass snakes.

The Agta Negriots’ experiences with python likely points to a more complicated relationship between early humans and snakes than is usually credited. A relationship where prey, predator, and competitor become interlinked, and one that may help to explain the widespread fear of snakes today.

“Granting that mid-20th century Agta were in no general
sense primitive, our data quantify a high potential for snake
predation on people similar in size and hunter–gatherer lifestyle
to prehistoric hominins,” the authors conclude. 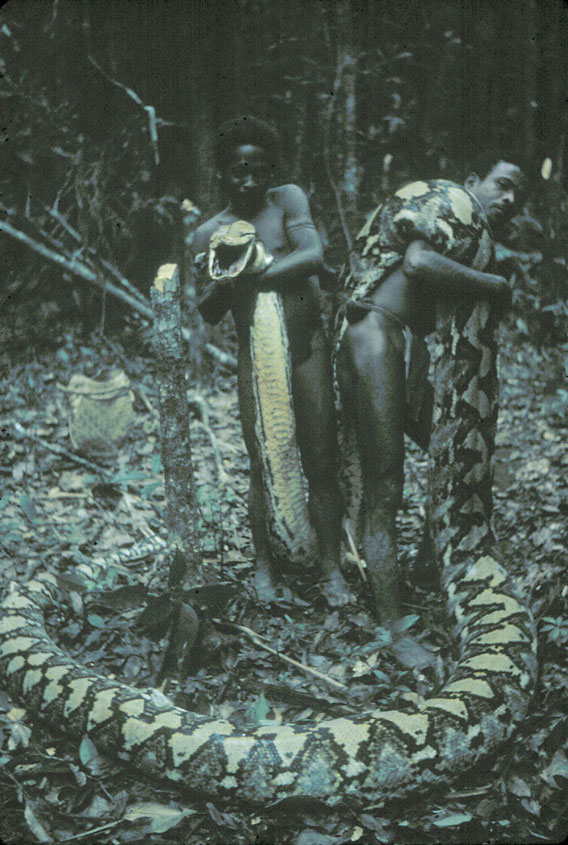 $500 offered for rediscovery of extinct snake

(11/29/2011) Need to make a quick 500 bucks? Easy: head to Glades County, Florida and find a specimen of the South Florida rainbow snake (Farancia erytrogramma seminola), which the US government says is extinct. In an unusual bid two NGOS, the Center for Biological Diversity (CBD) and the Center for Snake Conservation, are offering a substantial reward to the first person who can prove that the South Florida rainbow snake has not vanished forever.

(11/21/2011) Breeding farms in Indonesia are being used to launder illegally caught wildlife, finds a new study published in the journal Biological Conservation. The research is based on surveys of traders who supply the market for green pythons, a non-venomous snake popular in the pet trade for its many color forms. The authors tracked pythons from their point of capture in Indonesian New Guinea and Maluku to breeding farms in Jakarta where the snakes are exported for the pet trade as ‘captive-bred’. They found that 80 percent of snakes exported annually from Indonesia are illegally wild-caught.

(11/03/2010) Researchers have discovered a biological shocker: female boa constrictors are capable of giving birth asexually. But the surprise doesn’t end there. The study in Biology Letters found that boa babies produced through this asexual reproduction—also known as parthenogenesis—sport a chromosomal oddity that researchers thought was impossible in reptiles.