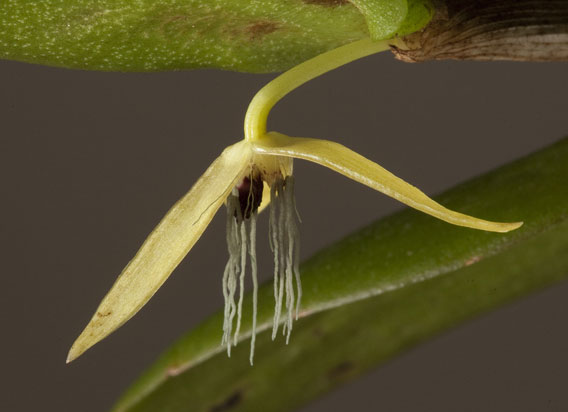 A mysterious new orchid blooms for one night only, opening around 10 PM and closing at 10 AM. Discovered on the island of New Britain near Papua New Guinea, the new species is the world’s first orchid that flowers only at night. Scientists found the new flower, named Bulbophyllum nocturnum, in a logging concession on the tropical island.

“This is another reminder that surprising discoveries can still be made. But it is a race against time to find species like this that only occur in primeval tropical forests. As we all know, such forests are disappearing fast,” André Schuiteman an orchid specialist with the Royal Botanic Gardens, Kew said in a press release. “It is therefore increasingly important to obtain funding for the fieldwork required to make such discoveries.”

The new species’ night flowering baffled researchers for a time. Ed de Vogel, who discovered the new species, had to take the plant home with him before he solved the riddle of why the flower’s buds were not opening as expected. He was surprised to suddenly find a bud opening at 10 PM and then wilting the next morning just twelve hours later.

The scientists are uncertain why the orchid only opens at night, however they believe the flower may be pollinated by night-flying midges.

Between 1989 and 2000, the island of New Britain lost 12 percent of its forest to logging, coconut, and palm oil plantations. During the same time period one fifth of the island’s lowland rainforests were destroyed. Many of the island’s tropical forests have never been surveyed by researchers. 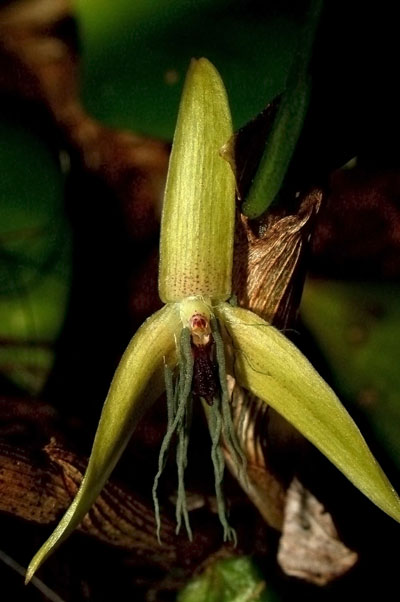 (11/10/2011) A new species of snail with a bizarre shell has surprised scientists. Discovered near massive waterfalls in pristine lowland rainforest in New Guinea, the tiny new species’ shell is shaped like a cornucopia, spirals flying freely instead of fused together like most shells. Latvian malacologist (one who study molluscs) Kristine Greke, who described the new species, named it Ditropopsis mirabilis, meaning miraculous or extraordinary. To date, scientists are uncertain why the super small snail—2 to 6 millimeters (0.07 to 0.23 inches)—would have evolved such a strange shell.