One of Ollanta Humala’s most striking achievements since becoming Peru’s president three months ago is new legislation guaranteeing indigenous people the right to be consulted about and in agreement with any project that affects them. Leading indigenous organization AIDESEP, usually so critical of the government, cautiously welcomed the move, while Survival International called it ‘a significant step away from the policies of former Peruvian president Alan Garcia, who vetoed a similar bill.’

This sense of change is evident in what Peru’s officials are saying too, as seen by the response to dramatic video footage released this month by the Environment Ministry (MINAM) showing ‘uncontacted’ (or ‘voluntarily isolated’) indigenous people almost coming into contact with tourists in Manu National Park.

‘(This government) is diametrically opposed to the previous government,’ Roger Rumrill, a MINAM consultant and well-known expert on indigenous issues, was quoted as saying in a National Geographic article about the footage. ‘We will work tirelessly to establish the areas where uncontacted people live so they don’t suffer from any oil or mining operations,’ said Rumrill in a MINAM statement.

That’s extremely encouraging to hear, although the recent sacking of the head of the government’s indigenous affairs institute, INDEPA, suggests something else. 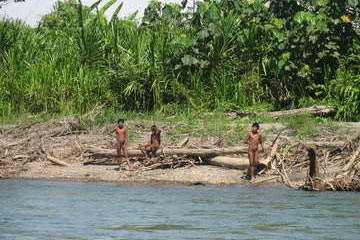 And what if, elsewhere in Peru, there isn’t video footage of the ‘uncontacted’ people? What if the government and the oil companies operating on their land exploit the lack of such strong evidence to claim they don’t exist?

That’s precisely what’s happening in Peru’s north-east where Perenco is building a 200 km pipeline. Barrett Resources, which Perenco acquired in 2008, Repsol-YPF, also operating in that region, and even INDEPA all initially acknowledged the existence of ‘uncontacted’ people in this area, but after fierce criticism from organizations like AIDESEP and Survival International, the companies and INDEPA have since denied it.

Given the identities of the two men in the MINAM photo accompanying its recent statement about the Manu incident, these denials are particularly ironic.

One of the men is Roger Rumrill, quoted above, who has previously gone on the public record saying there are ‘uncontacted’ people in the regions where Perenco and Repsol-YPF are operating.

‘The two companies’ lots are superimposed over territory belonging to uncontacted indigenous people,’ Rumrill said in an interview during the Permanent People’s Tribunal in Madrid last year. ‘It’s estimated they number between 100 and 200 people.’

The other man in MINAM’s photo, Carlos Soria, has been almost as explicit. In 2007, in a multi-authored statement responding to criticism of AIDESEP’s report listing evidence for ‘uncontacted’ people in the Perenco/ Repsol-YPF region, Soria wrote, ‘(AIDESEP’s) report provides reasonable proof of the existence of voluntarily isolated indigenous people in the area under study and therefore it is the responsibility of the Peruvian state to act immediately to protect this area from outsiders until 1) it can be proved definitively they don’t exist or 2) a reserve has been created for them.’

Any chance that Rumrill or Soria could have a word with INDEPA, or even better with Humala? The green light to build the pipeline was given just six days before he became president, and for things to really change in Peru, for things to really be different than under Garcia, he needs to step in and stop it.