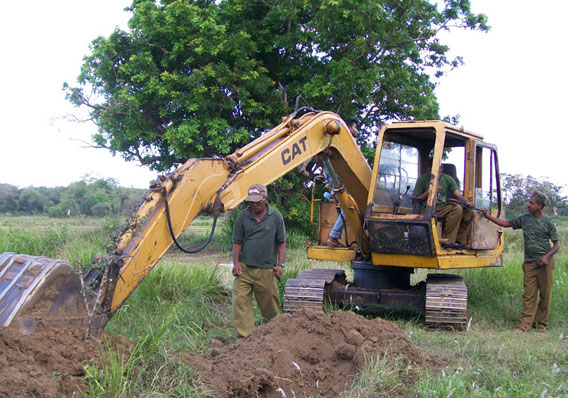 Dole Food Company, a US-based corporation famous for its tropical fruit products, is allegedly destroying rainforest in Somawathiya National Park in Sri Lanka for a banana plantation reports local press. The 4,700 hectare (11,600 acre) plantation, reportedly handed to local company Letsgrow by Sri Lanka’s military, imperils an elephant migration route and a number of tropical species. Letsgrow has partnered with Dole on the plantation work, already clearing almost half the area, described as ‘thick jungle’. Sri Lanka, which has only come out of a decades-long civil war in 2009, is currently seeking a rise in agricultural development.

“After the defeat of the [Liberation Tigers of Tamil Eelam (LTTE)], the Sri Lankan military took control of the previously occupied areas and once the war ended they did not return it to the Department of Wildlife Conservation as they should have,”a research conservationist who has worked in Sri Lanka and wished to remain anonymous told mongabay.com. “The military has retained control of the park and is excluding officers from the Department of Wildlife from the area. What is more, the District Secretary’s office has had no contact in this area and therefore they were uninformed of the project.”

Last year the military signed a memorandum of understanding (MoU) to allow a new private company, Letsgrow Ltd, to cultivate crops on military lands. However, environmentalists say that the lands now being cleared by Letsgrow Ltd and its partner, Dole, was never the army’s to give.

“According to the Fauna and Flora Ordinance, it is a non bailable offense to enter a national park, clear the jungle and to develop the land. The [Sri Lankan Army] has not only allowed the local agents Letsgrow Ltd to trespass on the Somawathiya National Park but has also permitted them to clear a vast area of land for cultivation,” the Environment Conservation Trust (ECT) director, Sajeewa Chamakara, told The Sunday Leader. Given that no officials have been allowed in to the plantation, there remains confusion how much of the land is in the park, how much is in a buffer zone, and how much on other land. In any case, no Environment Impact Assessment (EIA) was ever sought by the companies.

According to one of the co-owners of Letsgrow, Dole has partnered with the company and is providing funds, equipments, and banana saplings. The crops grown on the plantation are then to be purchased by Dole for sale.

“More than 50 to 60 tractors, bowsers, bulldozers, backhoes and excavators are at work from morning till late in the evening,” Chamakara, told The Sunday Leader.

Between 400 and 500 Sri Lankan elephants (Elephas maximus maximus), a subspecies of the Asian elephant, are believed to inhabit the park. The subspecies is listed as Endangered by the IUCN Red List due to large-scale habitat loss.

“In the short term, as banana cultivation is underway and elephants are still in the area, elephants will likely visit the plantations in search of food and risk being killed,” the source said. “If they are eventually excluded from the area, they will be driven to areas that are already inhabited by people. This will result in increased human-elephant conflict and will be detrimental to both human and elephant populations. Ultimately, the number of elephants left will depend on the amount of forest left. If there is no forest left, there will be no elephants.”

Reportedly the area being destroyed is largely vegetation along the Mahaweli river, once prime feeding ground for elephants and an important area for the park’s rich birdlife. Somawathiya National Park, which covers 37,900 hectares (93,662 acres), is home to wide variety of other Sri Lankan species.

“Disturbance to this habitat will impact leopards, water buffalo, sambar, fishing cat, rusty spotted cat, jackal, wild boar, and many bird species such as the common lora, crested hawk eagle, and painted stork. And of course, there are numerous species of trees and plant life that will be eliminated,” our source said.” This is not a complete list, but it gives you a sense of the diversity of wildlife that will be impacted by Dole’s monoculture banana plantation. Important riparian vegetation will also be impacted.”

The rusty spotted cat (Prionailurus rubiginosus), only found in Sri Lanka and India, is listed as Vulnerable by the Red List, while the fishing cat (Prionailurus viverrinus) is Endangered. The painted stork (Mycteria leucocephala) is classified as Near Threatened.

Locals told The Sunday Leader that the plantation also threatens their forest-dependent livelihoods, saying that the army is keeping them—along with everyone else—out of adjacent forests.

“During the war this entire area was under [Liberation Tigers of Tamil Eelam (LTTE)] control and the wilderness became one of the main sources of income for the villagers. It is from these jungles that the villagers collected bees honey, firewood and even meat for consumption. With the army’s occupation the villagers have been completely barred from entering these jungles,” anonymous sources told The Sunday Leader.

Dole did not respond to a request for comment. 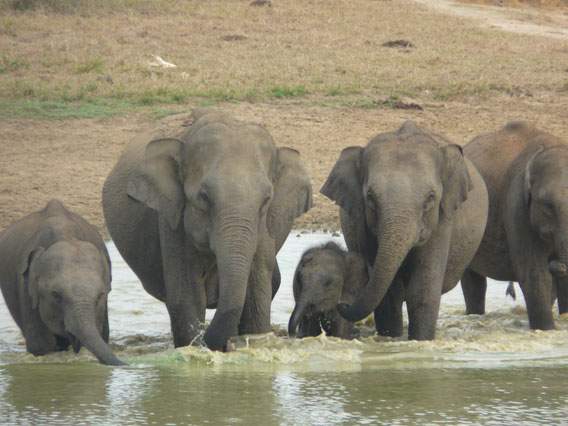 (02/09/2011) Two new incredibly small frogs have been discovered in Sri Lanka, an island nation off India with at least 100 species of frogs. The new frogs are in the genus Pseudophilautus, which are shrub frogs native either to Sri Lanka or India. One of the new species, dubbed Pseudophilautus hankeni, survives only in high mountain forests, and will likely be classified as Critically Endangered. “These species were discovered as a part of a broad amphibian survey that we carried out about 10 years ago in Sri Lanka. In that survey we discovered nearly 100 new species new to science. We are in the process of describing them now,” explained Dr. Madhava Meegaskumbura, who participated in the frogs’ discovery and formal description, to mongabay.com.

(07/18/2010) The Horton Plains slender loris (Loris tardigradus nycticeboides, thought extinct by researchers for over six decades, has finally posed for a photograph. This small nocturnal primate lives in the surviving montane tropical forest of Sri Lanka. The species was photographed during a recent expedition by the Zoological Society of London (ZSL)’s EDGE program in conjunction with Sri Lankan researchers.