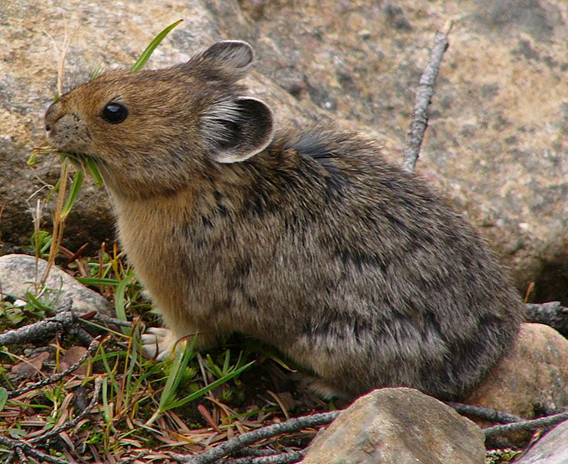 The last decade has not been a good one for the American pika (Ochotona princeps) according to a new study in Global Change Biology. Over the past ten years extinction rates have increased by nearly five times for pika populations in the Great Basin region of the US. Examining extinctions of pike populations in the region over the past 110 years, researchers found that nearly half of the extinction events occurred since 1999.

American pikas, small mammals related to rabbits and hares, inhabit cool montane regions in the western US and are known to be acutely sensitive to high temperatures. If pikas are unable to seek shelter, hot temperatures can lead to mortality. However, a few subspecies of pika are known to survive in warmer and lower altitudes. For most, though, climate change is likely wiping out some populations while pushing others to seek higher altitudes. The researchers found that movement up to higher altitudes had increased by 11-fold in the past decade with the range having moved up an average of 145 meters, or the height of the Great Pyramid of Giza, Egypt’s tallest. During the 20th Century the range moved up about 13 meters per decade.

Unlike many species, climate change appears to be the only threat to pikas survival, since the mammals are not experiencing habitat loss or degradation and are not hunted. This allows researchers a unique view of how changing climate is impacting the world’s wildlife.

American pikas are currently listed as Least Concern by the IUCN Red List, but the organization acknowledges that the total population needs to be reassessed in light of recent research showing declines. The US government recently denied listing the species as endangered due to the threat of climate change.

(03/23/2011) Local climate shifts caused by deforestation and land cover change are causing insects to migrate to higher — and cooler — habitats, reports a new study published in the journal Biotropica. The research has implications for predicting how species will respond to climate change.