Groups funded by the palm oil industry lashed out at the World Bank’s new framework to resume lending to the palm oil sector.

World Growth International and the Initiative for Public Policy Analysis (IPPA), groups that advocate on behalf of the industrial palm oil sector, blasted the World Bank for including social and environmental safeguards as guiding principles for lending to the palm oil sector. The World Bank said it would prioritize investments that “support smallholders and foster benefit sharing with rural communities.”

“This will take place by helping to strengthen smallholder producer organizations, promoting their access to finance and markets, improving their agronomy practices and productivity, and fostering fair contractual arrangements with larger companies,” said the World Bank in a statement.

The framework also gives priority to initiatives that shift palm oil expansion from forested areas and peat lands to degraded lands. It also aims to support efforts to improve productivity of existing plantations.

But the Washington D.C.-based World Growth International and Nigeria-based IPPA claim the framework will worsen poverty.

“The Bank’s new framework for palm oil engagement elevates radical ideological opposition to agriculture development above the needs of the poor and hungry in Africa,” said Thompson Ayodele, IPPA Director, in a press release.

“The proposed policy will still smother job growth, restrict long-term economic growth and upward mobility of millions and hamper efforts to strengthen global food security,” said Alan Oxley, chairman of World Growth International, in a statement issued before the final version of the framework was unveiled. “The World Bank is no longer champion of the poor; rather a ‘global environmental czar-in-chief.'”

“The process produced a result which observes the Bank drifting away from its development mandate,” the MPOC said in a statement.

The MPOC, together with World Growth International and IPPA, which share the same email list and use very similar messaging, advocate less regulation of the palm oil industry. Environmental groups and human rights campaigners disagree. The note that palm oil development has been linked to labor and rights’ abuses, as well as environmental damage. These NGOs argue that minimum safeguards are needed to ensure oil palm expansion doesn’t result in social conflict or destruction of important ecosystems, including carbon-dense peatlands and wildlife-rich rainforests. 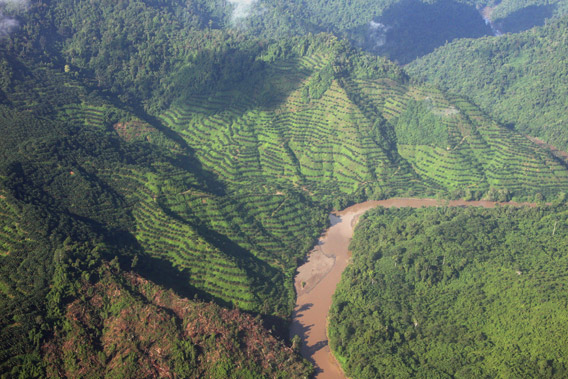 Oil palm plantations in Sabah, Malaysia. The palm oil industry maintains its product is “greening the planet” but the reality is more complex.

The World Bank’s new palm oil lending policy — which also applies to the International Finance Corporation (IFC), the investment banking arm of the World Bank &8212; emerged out of a dispute between smallholders in Indonesian Borneo and Wilmar, a palm oil giant. World Growth International, which portrays itself as a poverty alleviation organization, sided with Wilmar in that dispute, putting the interests of the large corporation over those of smallholders seeking redress for damages caused by the company.

World Growth International has been criticized for misrepresenting information in its reports and press releases. It has misattributed statements from scientists and Wangaari Maathai, a Nobel Prize winning environmentalist. The group has made inaccurate claims about the environmental performance of palm oil and it was recently rebuked by Indonesia’s largest palm oil company, Golden Agri Resources (GAR), after World Growth International chairman Alan Oxley claimed the company’s new forest policy would hurt its business. GAR disputed World Growth International’s assertion, saying the new forest policy, which prevents conversion of high conservation value forest and requires free prior informed consent in dealing with communities, would have an “immaterial” impact on its bottom line.

The new World Bank/IFC framework is the product of months of consultations with stakeholders, including the palm oil companies, NGOs, farmers, indigenous communities, development experts, and governments.

In response to IPPA’s remarks, an IFC spokesperson told mongabay.com: “The World Bank Group’s new framework for palm oil acknowledges that palm oil can be an important contributor to growth and economic development and to overcoming poverty, provided it is produced in an environmentally and socially sustainable manner.”

“The new framework also recognizes the role and importance of small holders in the sector. Our new integrated approach prioritizes initiatives to support smallholders. It will help to strengthen smallholder producer organizations by promoting their access to finance and markets, improving their agronomy practices and productivity, and fostering fair contractual arrangements with larger companies.”