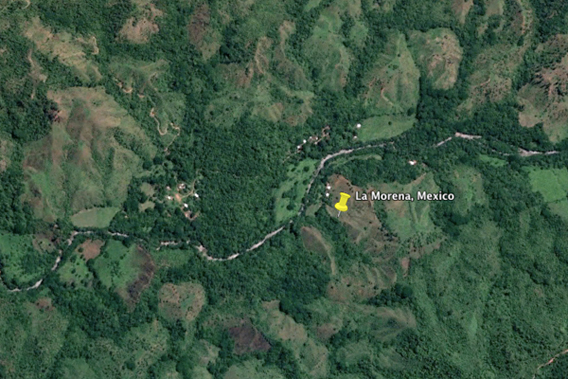 La Morena Mexico in the Petatlán Mountains in the state of Guerroro as viewed by Google Earth.

Javier Torres Cruz, 30, who fought illegal deforestation by drug traffickers in the Mexican state of Guerroro, was murdered a week ago. A member of the local NGO, Environmental Organization of the Coyuca and Petatlán Mountains, Torres Cruz was known as an outspoken activist against illegal logging in the mountainous dry forest region. Logging in the region is primarily linked to fields of poppies for the illegal drug trade.

According to reports, Torres Cruz was ambushed while in a car by gunfire near his hometown of La Morena in the Petatlan Mountains. He brother, Felipe Torres Cruz, was also injured. No suspects have been arrested.

In 2008 Torres Cruz was kidnapped for 10 days and tortured. His family claimed that the Mexican soldiers were behind the kidnapping.

Torres Cruz was outspoken, even in the face of danger. In 2008 he charged a rancher with threatening peasants for their land. He also accused men linked to alleged drug lord Alba Álvarez for killing human rights activist, Digna Ochoa in 2001, though authorities deemed she had committed suicide.

His family believes the killing may be linked to Torres Cruz’s testimony against Alba Álvarez.

According to CNN, 50 activists were killed in Mexico in 2010.

(11/21/2006) Few people realize that Mexico is home to the northernmost extent of rainforests that once extended clear down to the Amazon Basin. Though diminished in extent to about 30 percent of their original range, these rainforests are still characterized by high levels of biodiversity, including such charismatic species as jaguar, howler and spider monkeys, and macaws. These forests are also inhabited by indigenous people who live in ways largely unchanged since the arrival of Columbus in the 15th century. While still threatened by encroachment and illegal activities, in recent years the Mexican government and an assortment of environmental organizations has made progress in protecting these forests. Particularly active in these conservation efforts is the Los Tuxtlas Biological Station (Estacion de Biologia Tropical Los Tuxtlas del Instituto de Biologia Universidad Nacional Autonoma de Mexico) based in Veracruz (southern Mexico). In November 2006, Dr. Alejandro Estrada, senior research scientist at Los Tuxtlas and a leading authority on these forests, answered some questions on Mexico’s remaining rainforests and conservation efforts in the country.

(04/02/2008) Destruction of forests in central Mexico, is putting the Monarch butterfly’s annual migration at risk, says a researcher from the University of Kansas.

Mexico has big role in the illegal parrot trade

(05/30/2010) Juan Carlos Cantu, Director of Defenders of Wildlife’s Mexico office, spoke with Laurel Neme on her The WildLife radio show and podcast about the illegal parrot trade in Mexico and how his innovative research into the trade was used by the Mexican Congress to reform that country’s Wildlife Law to ban all trade in parrots. The illegal pet trade is probably the second-biggest threat facing parrots in the wild, with only habitat loss rating higher, and the impact is disturbing. Defenders of Wildlife documented this threat in a 2007 landmark study which found between 65,000 and 78,500 parrots are illegally trapped in the wild in Mexico every year.