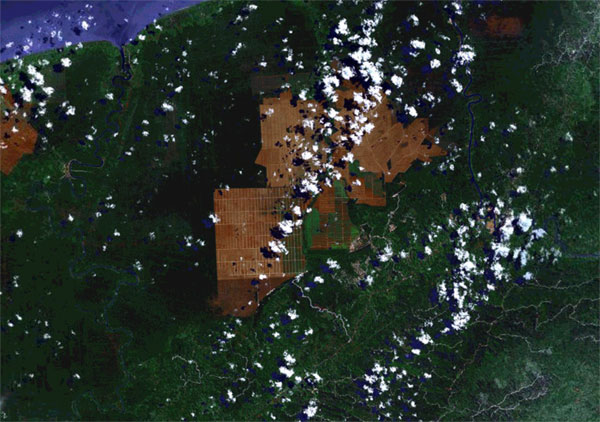 Peatlands and rainforests in Malaysia’s Sarawak state on the island of Borneo are being rapidly destroyed for oil palm plantations, according to new studies by environmental group Wetlands International and remote sensing institute Sarvision.

The analysis shows that more than one third (353,000 hectares or 872,000 acres) of Sarawak’s peatswamp forests and ten percent of the state’s rainforests were cleared between 2005 and 2010. About 65 percent of the area was converted for oil palm, which is replacing logging as timber stocks have been exhausted by unsustainable harvesting practices.

“As the timber resource has been depleted the timber companies are now engaging in the oil palm business, completing the annihilation of Sarawak’s peat swamp forests,” said Marcel Silvius, a senior scientist at Wetlands International.

The research, based on field surveys and satellite data, found that 20 percent of all Malaysian palm oil is produced on drained peatlands. In Sarawak, the rate is 44 percent.

Wetlands International says the studies are important because Malaysia does not provide “verifiable information on land use in relation to soil type or deforestation.”

“Official Malaysian government figures now appear to have given a far too optimistic picture; stating that only 8-13% of Malaysia’s palm oil plantations were situated on carbon rich peat soils; 20% for Sarawak,” the group said in a press release.

“This is the first time that detailed and verified figures on deforestation and peatswamp conversion come available for Sarawak,” added Niels Wielaard of Sarvision. “Free availability of satellite imagery and tools such as Google Earth are revolutionizing forest monitoring.” 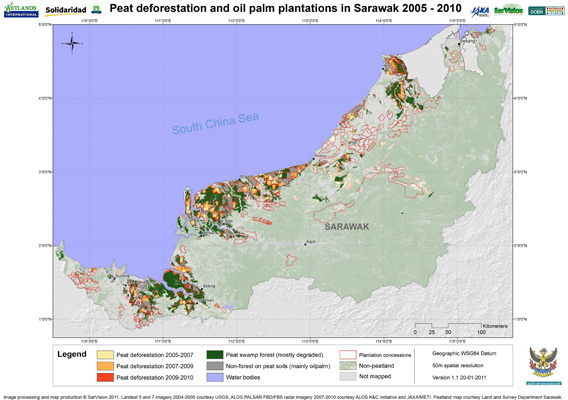 Click here for a large version of this map

The results come three months after Sarawak announced it would double its oil palm estate over the next decade. Speaking to The Star last November, James Masing, State Land Development Minister, said Sarawak is targeting 2 million hectares by 2020, which would make it the country’s largest palm oil producer. Sarawak presently has around 920,000 hectares of oil palm plantations.

But expansion raises a number of social and environmental concerns. New plantings have sparked conflict between developers and traditional forest users like the Penan, an indigenous group comprised of a number of sub-groups, a handful of which may remain nomadic. The Sarawak government says it intends to specific target lands claimed by native people, chiefly because native customary rights land cover an estimated 1.5 million hectares of the state.

Conversion of peatlands for palm oil production worries environmentalists because the process triggers large greenhouse gas emissions through both deforestation and drainage of the carbon-dense peat. Degraded peatlands are also more vulnerable to fire. Wetlands estimates that Malaysia’s palm oil industry is responsible for a minimum of 20 million metric tons of carbon dioxide annually.

“However, twice this amount is more likely,” said the group.

Despite these concerns, planned expansion may be difficult to slow. Malaysia’s federal system means that Sarawak can largely ignore mandates issued in the capital. Meanwhile, logging and plantations companies enjoy close ties with the state’s chief minister Abdul Taib Mahmud, who has ruled since 1981 and has accumulated great wealth despite a earning a civil servant’s wage. Recent investigations have linked tens of millions of dollars’ worth property holdings in the United States and Canada to Taib’s family.

Wetlands International believes pressure can be applied from the consumption side. It says consumers should question the origin of palm oil used in the products they buy and policy makers in Europe should include strong safeguards for sourcing of biofuels to ensure they do not drive deforestation and peatlands destruction.

Sensing the risks, some Malaysian palm oil producers have joined the Roundtable on Sustainable Palm Oil (RSPO), a body that sets environmental and social certification criteria. The RSPO aims to distinguish ostensibly responsible producers, but especially egregious transgressions by bad actors have tended to tarnish the image of the whole sector in the eyes of international consumers.