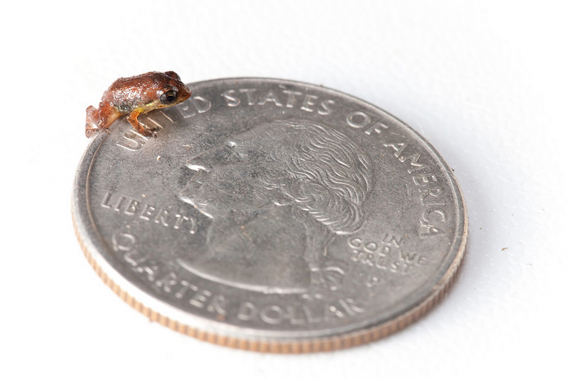 Juvenile Macaya Breast-spot Frog, Eleutherodactylus thorectes, a critically endangered species in the Massif de la Hotte, Haiti. About the size of a green grape when fully grown, this is one of the smallest frogs in the world. Last seen 1991. © Robin Moore/iLCP

On the eve of the anniversary of last year’s destructive earthquake, scientists have announced a bit of positive news out of Haiti: the rediscovery of six species of frogs.

The species, some of which were last seen two decades ago, were discovered during a biological survey in the remnants of the country’s severely degraded tropical forests.

“It was incredible”, said Robin Moore, a biologist with Conservation International who co-led the October expedition to a remote mountain area in Southern Haiti. “We went in looking for one missing species and found a treasure trove of others. That, to me, represents a welcome dose of resilience and hope for the people and wildlife of Haiti.”

Moore, together with Blair Hedges of Pennsylvania State University, had hoped to find the La Selle Grass frog (E. glanduliferoides), a species last seen more than 25 years. Instead the scientists and their team encountered 25 of the country’s 49 known native species, including six long-lost species, during the eight-day expedition.

The six species include: the Hispaniolan Ventriloquial Frog, which is known for its unusual call; Mozart’s Frog, also famous for its call; La Hotte Glanded Frog, characterized by striking blue sapphire-colored eyes; the Hispaniolan Crowned Frog, an arboreal species with a crown-like row of protuberances from its head; and Macaya Burrowing Frog, a species that bears froglets instead of eggs. All of the frogs, except for Macaya Burrowing Frog which was most recently seen in 1996, were last documented in 1991 during an expedition by Hedges.

The findings raised hope that there is still time to save Haiti’s unique, but highly threatened biodiversity.

“A common assumption about Haiti is that there is nothing left to save”, said Moore in a statement. “That is not entirely true. There are biologically rich pockets intact, despite tremendous environmental pressures. Haiti now has the opportunity to design their reconstruction plans around these pockets, and grow them, so they can more effectively act as natural buffers to climate change and natural disasters.”

Hedges added there is little time to lose.

“The biodiversity of Haiti, including its frogs, is approaching a mass extinction event caused by massive and nearly complete deforestation,” said Hedges, noting that 92 percent of Haiti’s frogs are considered threatened with extinction. “Unless the global community comes up with a solution soon, we will lose many unique species forever.”

The expedition is part of Conservation International’s Search for Lost Frogs, which was launched last summer to highlight the plight of amphibians, which are experiencing rapid population declines worldwide due to habitat loss, introduced species, pollution and pesticides, disease, and the impacts of climate change. The initiative, which to date has included searches in 19 countries, has rediscovered three species, including: a Mexican salamander not seen since 1941, an Ivory Coast frog last spotted in 1967, and a frog from Democratic Republic of Congo last seen in 1979.

“Finding six lost species in these relatively small corners of the country tells us that, despite tremendous human pressures, nature is hanging on in Haiti,” said Moore. “There is reason to hope.

“The ecosystems these frogs inhabit, and their ability to support life, is critically important to the long-term well-being of Haiti’s people, who depend on healthy forests for their livelihoods, food security and fresh water,” he continued. “Managed properly, these species and ecosystems can become a source of natural wealth and national pride for the country, that we hope will offer long-term benefits for its people.”