As corals around the world disappear at alarming rates, scientists are racing to protect the ones they can. At a workshop led by the Zoological Society of London (ZSL), the world’s foremost coral experts met in response to a decade of unprecedented reef destruction to identify and develop conservation plans for the ten most critically endangered coral species.

Described as the ‘rainforests of the ocean’, tropical coral reefs support one third of all marine life – while occupying just 0.2 percent of the ocean floor. Coral reefs have experienced extensive damage caused directly and indirectly by human activity. Swimmers who step on coral risk killing the animals living within, reefs existing near cities can be damaged by urban runoff; but the major concern of many scientists is the threat posed by global warming.

Many coral species are extremely sensitive to environmental changes and can die if water temperatures fluctuate by just one or two degrees Fahrenheit. As oceans heat up, many reefs are experiencing “bleaching” – an early response to stress in which the coral expels its colorful symbiotic algae – which can lead to death if conditions are not restored or the coral fails to acclimate.

Last year, Indonesia’s Coral Triangle reported a loss of up to 80 percent of its major reef-building Acropora coral colonies and a total loss of 50 percent of all other colonial coral species. The region, one of the world’s richest reef ecosystems, also experienced a huge die-off in 1997/98 when a massive, global bleaching episode killed an estimated 16 percent of reefs worldwide.

In an effort to stop their spiral towards extinction, scientists at the London conference teamed up to identify the most evolutionarily distinct and globally endangered (EDGE) tropical coral species. The EDGE Coral Reef program will include a conservation team that will train in-country scientists to conduct critical conservation research on the ten focal species, the aim of which will be the development of a greater understanding of the species’ status and determination of the most effective methods for their conservation. The program will also work to empower and assist local communities in the management of reef resources.

“Corals are one of the most threatened groups of animals on our planet and iconic flagships of the marine environment.” said Dr Heather Koldewey, International Marine and Freshwater Conservation Programme Manager for ZSL, ” EDGE Coral Reefs will focus on improving the resilience of the world’s most diverse coral species, ensuring our coral reefs flourish in the future.”

The Zoological Society of London began the EDGE program in order to identify and preserve species with unique evolutionary histories which are threatened with extinction, many of which receive little or no attention from other organizations.

“The EDGE concept for corals comes at a crucial time.” said Dr David Obura, Chair of the IUCN Coral Specialist Group, ” The unique approach of EDGE helps focus effort in places where unusual corals are found, thus helping to protect coral reefs as a whole from increasing impacts of climate change and over- extraction.”

To learn more about the EDGE Coral Reef program, or EDGE in general, visit
http://www.edgeofexistence.org/ 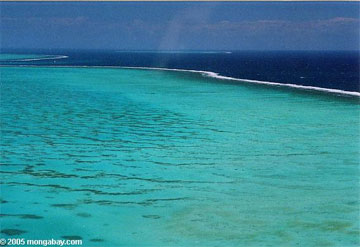 (11/17/2005)
Australia’s Great Barrier Reef could lose 95 percent of its living coral by 2050 should ocean temperatures increase by the 1.5 degrees Celsius projected by climate scientists. The startling and controversial prediction, made last year in a report commissioned by the World Worldwide Fund for Nature (WWF) and the Queensland government, is just one of the dire scenarios forecast for reefs in the near future. The degradation and possible disappearance of these ecosystems would have profound socioeconomic ramifications as well as ecological impacts says Ove Hoegh-Guldberg, head of the University of Queensland’s Centre for Marine Studies.