Just six years ago the beautiful medium-sized Asian cat, the clouded leopard, was considered a single species. Then in 2006 researchers announced that there were, in fact, two unique species of clouded leopard: one species (Neofelis nebulosa) that inhabited mainland Asia (from Nepal to China and south to peninsular Malaysia) and a more threatened species living on the islands of Borneo and of Sumatra, dubbed the Sunda clouded leopard (Neofelis diardi). Now, researchers have confirmed that clouded leopards living on Sumatra are distinct from those on Borneo, further subdividing these two populations into unique subspecies.

“Although we suspected that Sunda clouded leopards on Borneo and Sumatra have likely been geographically separated since the last Ice Age, it was not known whether this long isolation had caused them to split up into separate sub-species,” says lead researcher Andreas Wilting of the Leibniz Institute for Zoo and Wildlife Research in a press release.

Examining clouded leopard fur and bone from natural history museums around the world as well as living cats on both Borneo and Sumatra, Wilting and colleagues found that the long unconnected populations of clouded leopard showed differences in their genetics and the morphology of their skulls. However, both the Sumatra’s and Borneo’s clouded leopard share the same coat patterns. The researchers speculate that this is due to the similarity of their tropical forest environment.

The story of how the clouded leopard dispersed into so many unique cats is laden with natural disasters and climate changes. Researchers believe that Sunda clouded leopards were separated from the mainland Asian population by a massive volcano eruption around 75,000 years ago. Surviving only on the island of Borneo, the Sunda clouded leopard then colonized Sumatra across glacial land bridges during the Ice Age. These populations were then separated as the Ice Age ended and sea levels rose in turn, submerging the land bridges.

Both subspecies, the Bornean and the Sumatran, are classified as Endangered by the IUCN Red List mostly due to the destruction of rainforest. Borneo and Sumatra are currently undergoing some of the world’s highest deforestation rates due to expansions of palm oil plantations, logging, human-caused fires, and pulp and paper plantations. This is devastating for clouded leopard, since like other big cats, they require large areas to survive and live in low densities. Clouded leopards are also killed for their coats, and sometimes perish in snares meant for other species.

In contrast to Borneo and Sumatra’s clouded leopards, the mainland leopard species is considered Vulnerable. 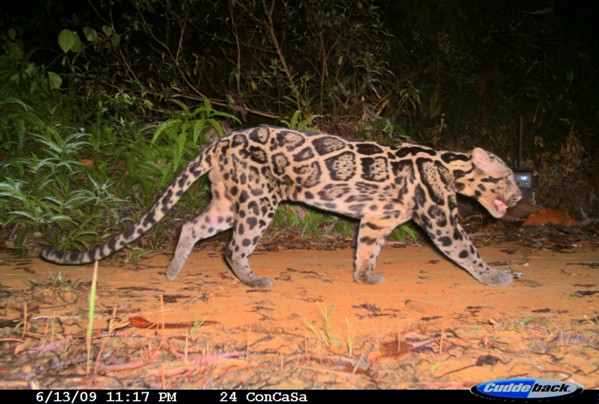 Saving the world’s most recently discovered cat species in Borneo

(04/10/2008) Last year two teams of scientists announced the discovery of a new species of clouded leopard in Borneo. The news came as conservationists launched a major initiative to conserve a large area of forest on an island where logging and oil palm plantations have consumed vast expanses of highly biodiverse tropical rainforest over the past thirty years. Now a pair of researchers are racing against the clock to better understand the behavior of these rare cats to see how well they adapt to these changes in and around Danum Valley in Malaysia’s Sabah state. Andrew Hearn and Joanna Ross run the Bornean Wild Cat and Clouded Leopard Project, an effort that aims to understand and protect Borneo’s threatened wild cats, which include the flat-headed cat (Prionailurus planiceps), marbled cat (Pardofelis marmorata) leopard cat (Prionailurus bengalensis) the endemic bay cat (Catopuma badia) and the Bornean clouded leopard (Neofelis nebulosa).