Scientists have discovered an extinct massive stork, standing nearly 6 feet tall (1.8 meter) and weighing 35 pounds (15 kilograms), which would have shared the island of Flores with the ‘hobbits’—dwarf hominin species known as Homo floresiensis—reports the BBC. According to the researchers the meat-eating stork was big enough to prey on young Homo floresiensis, and stood about 2 and a half feet (0.8 meters) above adult hobbits.

The giant stork shared the weird and wild habitat of Flores with today’s Komodo dragon, an extinct giant rat (one foot and 3 inches or 40 centimeters long), an extinct pygmy elephant, and of course the now famous hobbits, Homo floresiensis.

Scientists are still debating whether or not Homo floresiensis was a distinct hominin species or a group of humans suffering from disorders. However, the weight of evidence currently appears to point to the Indonesian hobbits as a unique species. 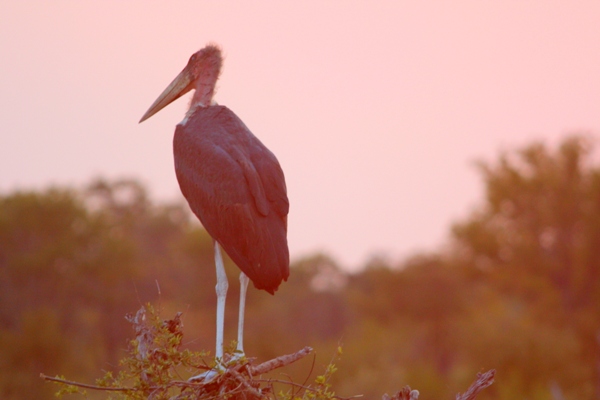 After years of controversy: Flores ‘hobbits’ are a new species of humans

(11/19/2009) When the ‘hobbits’ were discovered in 2003 they made news worldwide, sparking visions of a world our small relations lived among giant rats, dwarf elephants, and lizards bigger than the Komodo dragon. The small hominin fossils discovered on the island of Flores in Indonesia proved just how little modern humans knew about our deep ancestry. While researchers instantly claimed that the ‘hobbits’ were a new species of hominin other scientists disagreed: they argued that the ‘hobbits’ were modern humans that had been dwarfed by disease. A new study inSignificance hopes to put the controversy to rest.

Extinct goat was “similar to crocodiles”

(11/16/2009) It sounds like something out of Greek mythology: a half-goat, half-reptilian creature. But researchers have discovered that an extinct species of goat, the Balearic Island cave goat or Myotragus balearicus, survived in nutrient-poor Mediterranean islands by evolving reptilian-specific characteristics. The goat, much like crocodiles, was able to grow at flexible rates, stopping growth entirely when food was scant. This adaptation—never before seen in a mammal—allowed the species to survive for five million years before being driven to extinction only 3,000 years ago, likely by human hunters.

(02/18/2008) Researchers have discovered the remains of what may be the largest frog ever to exist.