The cost of maintaining the planet’s 3,500 remaining wild tigers is around $80 million a year, according to a new study published in the journal PLoS Biology.

The research, authored by an international group of authors across a range of institutions, identifies identifies 42 ‘source sites’ that should be given the highest priority in the effort to save tigers from poaching, habitat destruction, and loss of prey. The sites represent only six percent of their current range, by 70 percent of the global tiger population.

The authors say securing these sites is “the most effective and efficient way of not only preventing extinction but seeding a recovery of the wild tiger,” according to a statement from the Wildlife Conservation Society, on the organizations that supported the research. 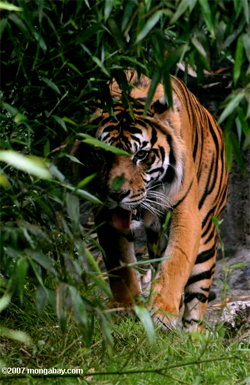 Tiger. Photo by Rhett A. Butler

“While the scale of the challenge is enormous, the complexity of effective implementation is not,” said Joe Walston, Director of the Wildlife Conservation Society’s Asia Program and lead author of the study, in a statement. “In the past, overly ambitious and complicated conservation efforts have failed to do the basics: prevent the hunting of tigers and their prey. With 70 percent of the world’s wild tigers in just six percent of their current range, efforts need to focus on securing these sites as the number one priority for the species.”

The research found that of the world’s 3,500 tigers in the wild, only about 1,000 are breeding females. Yet given habitat protection and sufficient prey, tiger populations can recovery quickly.

The study identified India as having the most tiger source sites worth saving. It has 18. The island of Sumatra has eight source sites, while the Russian Far East has six.

The authors estimate the total annual cost of effectively managing source sites at $82 million, about $47 million of which is met with current commitments from governments and the international community. The $35 million shortfall is needed to “intensify proven methods of protection and monitoring on the ground,” according to the researchers.