Ecuador’s tallest waterfall to be destroyed by Chinese dam

The 1,500 megawatt Coca-Codo Sinclair Hydroelectric Project will divert water flow away from the 480-foot San Rafael Falls, leaving it “high and dry.” Worse, the project, which is scheduled for completion in 2016, will be pressure on Sumaco Biosphere Reserve, an area so renowned for its biodiversity that “even the oil companies spared this area during prospection and development of pipeline corridors in the Ecuadorian Amazon,” according to Save America’s Forests, which says the falls have become the principal attraction of Sumaco. 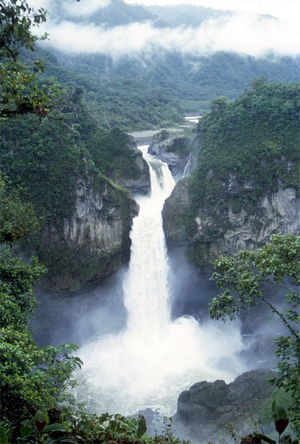 “It is located in the mega-diverse transition zone between the Andes Mountains and the Amazon,” stated the environmental group in a press release. “The falls have become one of the more prominent images and icons for promoting ecotourism in Ecuador, a country that made headlines in 2008 for being the first nation to grant constitutional rights to nature itself.”

Matt Finer of Save America’s Forests says the dam goes against the spirit of Ecuador’s constitution as well as its recent proposal to protect Yasuni National Park in the Amazon from oil development.

“So basically you have the first country in the world that legally respects nature, and they are about to destroy their greatest waterfall. While we applaud and support Ecuador’s revolutionary initiative to leave oil reserves under the Amazon, this hydroelectric project is just a step back to business as usual.”

There are also questions about the scale of the dam.

Matthew Terry of the Ecuador-based Napo River Foundation says the project is designed for much higher flow rates from the Coca River. Furthermore, the project lacks “a comprehensive environmental impact study, as well as a number of technical studies, final designs, and a definitive budget.”

“There is no doubt in my mind that when they build the diversion structure with the capacity to take over 200 cubic meters per second from the river channel, and the river only has about half of that, they will take the entire river and leave the San Rafael Falls with virtually no water,” said Terry.

The project will also necessitate the building of roads into Sumaco. Already a new access road been built into a previously untouched part of the reserve to the proposed powerhouse location.

“It is now well understood by scientists that new road construction is the biggest trigger of tropical deforestation, so building multiple new roads into the core protected areas of the Sumaco Biosphere Reserve without adequate planning and studies is incredibly irresponsible,” said Finer.

Terry and Finer are calling upon the Ecuadorean government to shelve, or at least substantially scale back, the project in favor of two hydroelectric projects (the Sopladora and Cardenillo Hydrolectric Projects) closer to population centers that would generate over 600 megawatts, lose less electricity during transmission, and result in less damage to the environment. They also highlight three geothermal projects that would generate over 400 megawatts of power.

(08/19/2010) Although developers and government often tout dams as environmentally-friendly energy sources, this is not always the case. Dams impact river flows, changing ecosystems indefinitely; they may flood large areas forcing people and wildlife to move; and in the tropics they can also become massive source of greenhouse gases due to emissions of methane. Despite these concerns, the Amazon basin—the world’s largest tropical rainforest—is being seen as prime development for hydropower projects. Currently five nations—Brazil, Bolivia, Colombia, Ecuador, and Peru—are planning over 146 big dams in the Amazon Basin. Some of these dams would flood pristine rainforests, others threaten indigenous people, and all would change the Amazonian ecosystem. Now a new website, Dams in Amazonia, outlines the sites and impacts of these dams with an interactive map.

(08/03/2010) In what may amount to a historic moment in the quest to save the world’s rainforests and mitigate climate change, Ecuador and the United Nations Development Fund (UNDF) have created a trust fund to protect one of the world’s most biodiverse rainforests from oil exploration and development. The fund will allow the international community to pay Ecuador to leave an estimated 850 million barrels of oil in Yasuni National Park in the ground instead of extracting it. This first-of-its-kind agreement, known as the Yasuni-ITT Initiative, will allow the rainforest protected area to remain pristine: preserving one of the most species-rich places on Earth, safeguarding the lives of indigenous people, and keeping an estimated 410 million tons of CO2 out of the atmosphere.