Discovers name species to promote conservation rather than themselves.

Scientists have discovered a new species of chameleon in a small block of rainforest in Madagascar.

The color-changing lizard, which is described in the current issue of Salamandra Journal, is named Calumma tarzan after the nearby town of Tarzanville, in the central eastern highlands of Madagascar. The chameleon is typically yellow or green and adopts an attractive striped pattern when stressed.

The Tarzan chameleon was discovered by a team of German and Malagasy researchers, who say they chose a “celebrity name” that would “promote protection for this last patch of forest” instead of naming the species after themselves, as is convention. They recommend it be listed as “critically endangered” under IUCN Red List criteria for endangered species due to its restricted range of about 4 square miles and threats from deforestation. 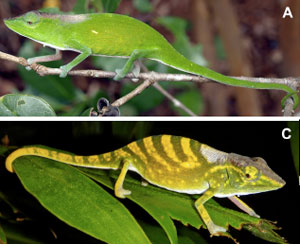 The authors—including Miguel Vences and Frank Glaw, publishers of the definitive guide to herps in Madagascar—note that flagship species for conservation in Madagascar are usually represented by lemurs, but that the island’s “striking and colourful” reptiles and amphibians could also serve as symbols for ecosystem protection efforts.

“[Chameleons] are popular and enigmatic components of the Malagasy herpetofauna for ecotourists, qualifying them as ideal flagship species for conservation activities,” the authors write.

Madagascar is home to about 40 percent of the world’s known chameleon species, including the largest and the smallest kids. Nine new species of Calumma, the genus under which Tarzan’s chameleon is classified, have been described in the last 15 years, according to the authors.

Over the past half century, Madagacar’s forests have been greatly diminished by subsistence rice cultivation, fuelwood collection, charcoal production, logging, and fires set for cattle grazing. Recent political instability has ushered in widespread illegal logging of the country’s rainforest parks for precious timber, putting rare and endemic species at risk.

Half of Madagascar’s amphibians may still await discovery

(03/11/2008) Madagascar is one of the most unique places on Earth for wildlife. When the public thinks of Madagascar’s fauna most likely they think of one of the fifty species of lemur. Yet, Madagascar possesses a wealth of endemic wildlife outside of these unique prosimians. For example, to frog-lovers Madagascar is a paradise. The only amphibians living on Madagascar are frogs; the island is devoid of toads, salamanders, or newts. But what it lacks in other amphibians it makes up for in the number and beauty of its frogs. Currently, 240 frogs have been catalogued in Madagascar, 99 percent of which are endemic. Yet, amphibian expert Dr. Franco Andreone believes that, according to recent field studies, this may only be half of the frogs that actually live in Madagascar. Dr. Andreone believes the final tally could reach 500 species!