According to my Oxford English Dictionary, ‘cryptic’ means: ‘secret, mystical; mysterious; obscure in meaning; enigmatic’. This is the perfect adjective for the rare Indian bird, Jerdon’s courser (Rhinoptilus bitorquatus).

“It is not so easy to spot as it is a small bird and when you show the torch it crouches and merges with the surroundings. So we need very good trained eyes to look for them,” Dr. P. Jeganathan recently told mongabay.com.

Nocturnal, incredibly rare, and adept at avoiding human eyes: it may not be surprising that the Jerdon’s courser was thought extinct for some 80 years. An attractive bird with long spindly legs and an almost hawk-like face, it blends in perfectly with its surroundings. Another meaning for cryptic: ‘Of markings, coloration, etc.: serving to camouflage an animal etc. in its natural environment’. Although Jerdon’s courser can fly, it prefers moving along the ground, perhaps because it can hide so well there in plain sight. Of three courser species in India, Jerdon’s is the only nocturnal one. Its closest relatives are not India’s other coursers, but Africa’s.

To prove just how cryptic this species is: Jeganathan spent eight years studying the Jerdon’s courser, but only saw the bird well three times.

Given this, even well-planned, expert surveys for the bird are “not reliable,” says Jeganathan, explaining that not spying Jerdon’s courser during the survey “doesn’t mean that the bird is not there.”
So, Jeganathan and his team had to develop a new approach of finding the bird.

“It is called tracking strip method. It is generally used to study mammals (tigers, civets) but for the first time we have used this for a bird. We collect soil from the road side and sieve it so that it is very fine. Then we go to the potentially suitable habitat of this bird and deploy tracking strips (5 meters long and 30 centimeters wide) on the forest floor. As Jerdon’s Courser walks a lot, if the bird is there […] then it would leave its footprint on this tracking strip. To confirm the identity of the footprint we keep the camera trap at the end of the tracking strip and when the bird crosses this strip it will take its own picture.”

The bird has now been identified in three different locations in Sri Lankamaleswara Wildlife Sanctuary.

Jeganathan was also able to identify and record the bird’s call, giving researchers another tool to find the species.

“Jerdon’s Courser is one of the rarest birds of the world. It is much more rare than tigers!” says Jeganathan. “It is listed as Critically Endangered by IUCN. Because it known only from one single site and the habitat in which it lives is also shrinking and degrading. Although the potentially suitable habitat is present in quite a few places it’s not been surveyed and hence we do not know much of their geographical distribution.”

Jeganathan says that habitat destruction and degradation is the number one threat to this enigmatic species. Found in scrub jungle with open spaces, much of which is actually outside the wildlife sanctuary, the bird competes with humans for land.

“This habitat is heavily used by locals mainly for cattle grazing [and] woodcutting. But actually moderate levels of wood cutting and cattle grazing are good for the Jerdon’s courser habitat as these kinds of activities maintain the architecture of the habitat […] but not over grazing and extensive wood cutting,” says Jeganathan.

If the bird is to survive, its habitat must be retained. In addition, more surveys are needed in scrub jungles that could house the bird.

“In the places where it is known to occur the habitat should be protected from heavy human disturbance and long term monitoring of habitat here is essential and long term research is vital. Radio telemetry studies should be carried out to know more about their ecology,” Jeganathan says.

As with most forgotten species, simply spreading the word may be enough to save the species from extinction.

“Jerdon’s courser is not as charismatic as Tiger,” Jeganathan admits. “So it needs lot of publicity […] If we save the scrub jungle we can save the Jerdon’s courser. That’s the only solution. When the tiger disappeared from some of the tiger reserves in India […] it was quite obvious that they had disappeared because there were no sightings. But it won’t be in the case of the Jerdon’s courser. We will not know even if it disappears unless we protect their habitat and unless we do long term monitoring in the sites where it is know to occur. As a precautionary measure we should protect the potentially suitable habitat even if it found outside the sanctuary.”

It’s likely the Jerdon’s courser evolved to be as cryptic as possible to avoid predators and possibly even humans. Yet, cryptic species are some of the most difficult to protect from extinction, since they require conservation acts-of-faith, saving places we hope the species still inhabits.

To support research and conservation for the Jerdon’s courser, visit Just Giving for Birdlife International.

In addition, Birdlife International is still seeking a species champion for the bird to commit to long-term funding to keep Jerdon’s courser from extinction. 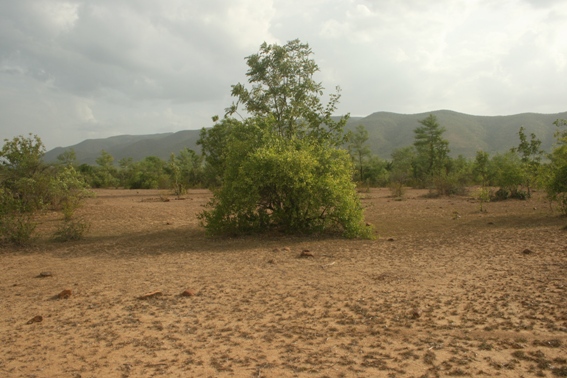 First-ever photo of rare and spectacular hummingbird from Colombia

(03/31/2010) A conservationist has taken the first-ever photos of a living Santa Marta Sabrewing (Campylopterus phainopeplus) in the El Dorado Nature Reserve in the Sierra Nevada de Santa Marta in Colombia, reports ProAves, a bird conservation group.

(05/26/2010) Researchers have discovered a new species of antpitta in the montane cloud forests of the Colibri del Sol Bird Reserve in western Colombia. A thrush-like bird, the new cinnamon and gray species was, according to a press release by the American Bird Conservancy (ABC), “captured, banded, measured, photographed, sampled for DNA, and then released alive back into the wild”. This is one of only a few incidences in which a new species has been described without ‘collecting’ an individual (i.e. killing) to provide a model of the species in a museum. The new bird has been named Fenwick’s antpitta (Grallaria fenwickorum) after the President of ABC, George Fenwick, and his family.

Birder captures first footage ever of long whiskered owlet, one of the world’s rarest birds

(02/04/2010) It was any birders dream come true: not only to see one of the world’s rarest birds, but to discover a new unknown population. Israeli birder, Shachar Alterman, was surveying birds with the UK organization Neotropical Primate Conservation in Peruvian cloud forest when he heard and then saw the long whiskered owlet.

(01/27/2010) A press release came out recently that claimed a new sighting and photographs of the ‘extinct’ ivory-billed woodpecker. There hasn’t been a confirmed sighting of the ivory-billed woodpecker since the 1940s when the last known population lost its habitat to clearcutting. However, the news release has brought excitement, hope, but mostly skepticism among birding blogs.

(01/14/2010) The Danum Valley Conservation Area in Sabah, Malaysia is a huge draw for tourists and scientists; a research station has been operating in Danum Valley since 1986. But the rainforest still has surprises left: in June two employees with a tour company named Field Guide came upon every ornithologist’s dream, a bird species entirely unknown to science.

(01/13/2010) Named in 2007 the ‘world’s least known bird’, the large-billed reed warbler has officially lost that title as researchers with the Wildlife Conservation Society (WCS) have discovered its breeding ground in the remote Wakham Corridor in the Pamir Mountains of Afghanistan. “Practically nothing is known about this species, so this discovery of the breeding area represents a flood of new information on the large-billed reed warbler,” said Colin Poole, Executive Director of WCS’s Asia Program said in a press release.

(04/08/2010) Travelers to tropical destinations are likely familiar with the gecko. Clinging to walls and ceilings of buildings—sometimes staring down at you from the bedroom ceiling or glancing at you quizzically from the bathroom door—the small adhesive-footed lizard could be aptly described in some tropical areas as ubiquitous. Despite the apparent commonness of some species, geckos are delightful lizards with round wide eyes, a thick gripping tongue, and of course that amazing knack of seemingly defying gravity with specialized toe pads. But not all geckos are as easily found—or as common—as those hanging out, literally, in a jungle lodge. The Gekko gigante, also known as the Gigante narrow-disked gecko, has been little- noticed by the public. Even scientists know little about the lovely gray-and-blue gecko beyond the fact that it lays its eggs on cool moist cave walls in two Philippine Islands.