A fossilized snake has been discovered inside a titanosaur nest in India, leading researchers to conclude that the snake fed on newly-hatched dinosaur babies, rather than their eggs like modern snakes.

Paleontologist and snake expert Jason Head says that the snake, known as Sanajeh indicus, lacked the wipe-jaws needed to swallow eggs, but just-hatched baby titanosaurs would have been perfect prey for the 3.5 meter (nearly 12 feet) long serpent. Titanosaurs belong to the sauropods, long-necked herbivorous dinosaurs which includes the world’s largest animals to ever walk the land.

“Living primitive snakes are small animals whose diet is limited by their jaw size, but the evolution of a large body size in Sanajeh would have allowed it to eat a wide range of prey, including dinosaur hatchlings,” Head explains. “This is the first direct evidence of feeding behavior in a fossil primitive snake, and shows us that the ecology and early evolutionary history of snakes were much more complex than we would think just by looking at modern snakes today.”

“I saw the characteristic vertebrae of a snake beside the dinosaur eggshell and larger bones, and I knew it was an extraordinary specimen … even if I couldn’t put the whole story together at that point. I just knew we needed to examine it further,” Wilson says of the discovery.

“The eggs were laid in loose sands and covered by a thin layer of sediment. We think that the hatchling had just exited its egg, and its movement attracted the snake,” explains Dhananjay Mohabey from the Geological Survey of India who originally discovered the fossils.

Head adds that “it would have been a smorgasbord. Hundreds or thousands of defenseless baby sauropods could have supported an ecosystem of predators during the hatching season.”

The researchers speculate that the snake was devouring babies when it was fatally interrupted.

“Burial was rapid and deep,” says geologist Shanan Peters who also studied the nest. “Probably a pulse of slushy sand and mud released during a storm caught them in the act.” 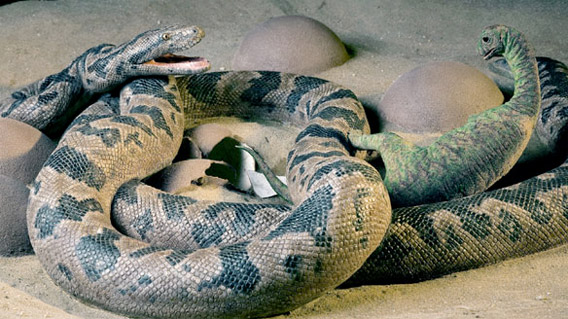 Life-size reconstruction of the moment captured by the fossils. Sculpture by Tyler Keillor and original photography by Ximena Erickson; image modified by Bonnie Miljour.

First footage captured of giant sea serpent of the deep: the oarfish

(02/09/2010) Scientists have captured what they believe to be the first footage ever of the oarfish, the species likely responsible for legends told of sea serpents.

(02/01/2010) Nature never runs out of surprises. Exploring Sudest Island off of Papua New Guinea, researchers discovered a new species of frog that drastically changes its appearance from juvenile to adulthood, a transformation that has never been seen in another frog.The new species, named Oreophryne ezra, is shiny black with bright yellow spots. Yet when it matures, the frog becomes rose-colored and even its eyes change from black to blue.

(01/26/2010) A species dubbed “the world’s most miserable-looking fish” is at risk of extinction due to poor fishing practices, reports The Daily Telegraph.

World of Avatar: in real life

(01/13/2010) A number of media outlets are reporting a new type of depression: you could call it the Avatar blues. Some people seeing the new blockbuster film report becoming depressed afterwards because the world of Avatar, sporting six-legged creatures, flying lizards, and glowing organisms, is not real. Yet, to director James Cameron’s credit, the alien world of Pandora is based on our own biological paradise—Earth. The wonders of Avatar are all around us, you just have to know where to look.

(10/28/2009) The short-nosed fruit bat Cynopterus sphinx is the first bat species to have been observed engaging in oral sex.

(06/10/2009) Three different species of frogs have been discovered living in the dung of the Asian elephant in southeastern Sri Lanka. The discovery—the first time anyone has recorded frogs living in elephant droppings—has widespread conservation implications both for frogs and Asian elephants, which are in decline. “I found the frogs fortuitously during a field study about seed dispersal by elephants,” Ahimsa Campos-Arceiz, a research fellow from the University of Tokyo, told Monagaby.com.

(02/04/2009) On Wednesday scientists announced the discovery of the world’s largest snake, a prehistoric beast which preyed on giant turtles and crocodile-like reptiles in South America after the demise of the dinosaurs. As amazing as the discovery is, its greatest importance may be the clues it provides conservationists about the future of tropical forests under various global warming scenarios.

(10/05/2005) The National Park Service released photos that show the carcass of an American alligator that was almost swallowed by a Burmese python.