Researchers have long been fascinated by how insects migrate thousands of kilometers, for example from Britain to the Mediterranean. A new study, published in Science shows that although tiny, insects are not at the mercy of winds as expected. Instead they employ sophisticated flight behaviors to use fast winds to their advantage.

Employing specially-designed radar, researchers were able to observe migrating moths and butterflies flying several hundred meters above the ground. The insects use a ‘compass sense’ that allows them to select the most favorable fast winds blowing in the right direction. On the way they will make small adjustments in their heading to ensure they arrive where they want to be. This enables the insects to fly at speeds comparable to a car: up to 100 kilometers per hour (or 62 miles per hour). A speed faster, in fact, than many migrating birds.

“Migratory butterflies and moths have evolved an amazing capacity to use favorable tailwinds. By flying at the heights where the wind currents are fastest, migratory moths can travel between their summer and winter grounds in just a few nights,” explains Dr. Jason Chapman with Rothamsted Research at the Biotechnology and Biological Science Research Council.

With the radar researchers tracked a specific migration of butterflies and moths flying south out of Britain to avoid the cold winter.

“We estimate that over 2 billion insects were involved in the mass migration events that we studied. These insect migrants are clearly very successful,” said Dr. Jane Hill with the University of York.

The study was funded by the UK Biotechnology and Biological Sciences Research Council (BBSRC). 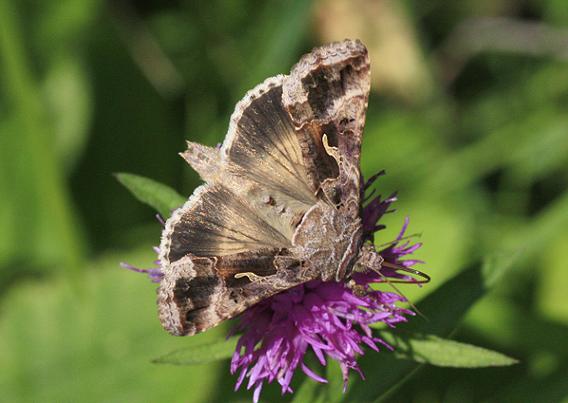 The migrant moth Autographa gamma (Silver Y), one of the species of migratory insects that have evolved sophisticated flight behaviors to optimize its migratory route. Image courtesy of Ian Woiwod.

(07/16/2009) Researchers have discovered a species of tiger moth that eludes bats by jamming their echolocation with ultrasonic clicks, a discovery that adds to the list of defensive mechanisms that insects use to defend themselves against bats. The study is published in the journal Science.

(07/16/2009) Millions of dragonflies migrate thousands of kilometers across the Indian Ocean from southern India to Africa, reports the BBC.

(06/11/2009) A new species of moth with brilliantly-colored pink wings has been discovered at 7,700 feet in the Chiricahua Mountains of southern Arizona. “This large moth flew in and we didn’t think much of it because there is a silk moth very much like it, a Doris silk moth that feeds on pines that has dark wings with pink on the hind wings. It’s fairly common there,” said University of Arizona biologist, Bruce Walsh, who discovered the species.