A specimen of the new spider, named Nephila komaci, was first found in 2000 in the Plant Protection Research Institute in Pretoria, South Africa. Matjaž Kuntner, chair of the Institute of Biology of the Slovenian Academy of Sciences and Arts and a Smithsonian research associate, made the discovery, calling it “surprising”.

The lone specimen spurred Kuntner and colleagues to search throughout South Africa in hopes of finding the species. These expeditions found nothing. Then in 2003 a second specimen of the mystery arachnid was found in the Naturhistorisches Museum Wien in Vienna, Austria; this specimen had been collected in Madagascar—far from South Africa. However, since Kuntner and his team could not locate the species in the field or in any other museums they began to believe that the spider was extinct.

But then—eureka!—a colleague found a male and two females of the new species in Tembe Elephant Park in South Africa.

After publishing the find in PLoS ONE, Kuntner and his colleagues are now calling on the public to help find more populations of Nephila komaci in Africa and Madagascar.

“We fear the species might be endangered, as its only definite habitat is a sand forest in Tembe Elephant Park in KwaZulu-Natal,” said Jonathan Coddington, senior scientist and curator of arachnids and myriapods in the Department of Entomology at the Smithsonian’s National Museum of Natural History. “Our data suggest that the species is not abundant, its range is restricted and all known localities lie within two endangered biodiversity hotspots: Maputaland and Madagascar.”

Golden orb weavers are sexual dimorphic in size. While male spiders are regular-sized, females are evolutionary giants. The body-length of a female Nephila komaci can be as large as 1.5 inches (3.8 centimeters) with legs spanning 4-5 inches (10-12 centimeters). The golden orb weavers build the world’s largest webs: often spanning over a meter in size. Unlike other spiders, they build their nests to last—sometimes even several years.

In all more than 41,000 spiders are known to science. While an average of 400-500 new spider species are found every year, a new golden orb weaver has not been discovered since 1879. 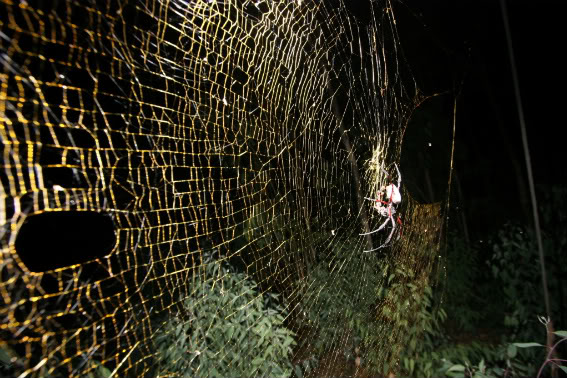 (08/23/2008) DNA analysis has revealed a previously unknown species of bird in the Central African country of Gabon.