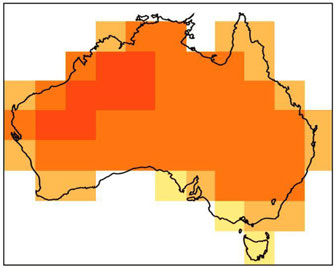 Speaking at a climate conference in Sydney, Andy Pitman, co-director of the University of New South Wales’s climate change research center, said that Australia will face a 100 to 200 percent increase in bushfire vulnerability by 2100 if greenhouse gas emissions aren’t curbed.

“If we continue to track a high emissions future I don’t believe the increase in bushfire risk would be adaptable to,” he was quoted as saying the News Limited.

Pitman said that global warming is expected to cause temperature rise in Australia and would “very likely” result in a drier environment.

“You don’t need to be a rocket scientist or even a climate scientist to figure out that those two things together would drive increased likelihood of severe bushfires,” he said. “The risk of someone dropping a match and starting a fire is much higher.” 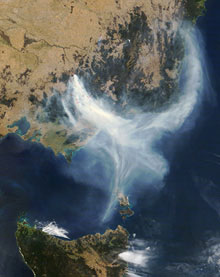 Smoke from the bushfires in SE Australia, 8 December 2006. Courtesy of NASA

In recent years Australia has suffered devastating wildfires that have caused billions of dollars in property damage and loss.