A new 800-km railway backed by a South Korean consortium will boost logging in the Republic of Congo, reports the International Tropical Timber Organization (ITTO) in its April 1 Tropical Timber Market Report.

The South Korean group has agreed to build the railway from Brazzaville to Ouesso in exchange for timber concessions in Republic of Congo’s remote, but densely forested northern region.

ITTO says the country currently must transport timber by road for export from neighboring Cameroon rather than its own port of Pointe-Noire, costing the country more than $50 million a year in lost earnings. Timber is the Republic of Congo’s second largest export after oil, accounting for 7 percent of GDP. 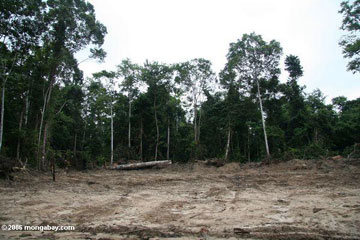 More than 60% of the Republic of Congo is forested, of which about a third is classified as pristine forest. Officially, deforestation rates in the country are some of the lowest in Central Africa.