In a surprising move, China has developed guidelines for the establishment of sustainable forest plantations abroad by Chinese firms, according to the International Tropical Timber Organization’s (ITTO) April 1 Tropical Timber Market Report. The move comes as China faces increasing criticism from environmental groups for pillaging the world’s forests to feed its rapidly growing economy.

The State Forestry Administration will soon begin the process of selecting companies to implement the guidelines, which include bans on illegal logging and clearing of natural forests for plantations, on a “trial basis,” according to ITTO.

The guidelines are significant as China plays an increasingly important role in resource extraction in forests around the world. Chinese firms are aggressively investing in oil palm plantations in Indonesia and logging operations throughout Asia and Africa. 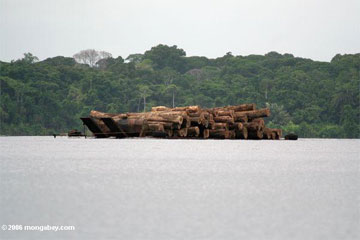 China’s interest in foreign timber jumped dramatically following a domestic ban on logging after deadly flooding in 1998. Politicians blamed deforestation for the damage wrought by the floods.

The sustainable forest plantations initiative follows the announcement of a government “green buying” policy last December. Starting in 2008, the policy will prioritize purchasing of environmentally friendly products and services. by state and provincial governments.

China's Olmypics may destroy New Guinea's rainforests — 5/1/2006
Construction for the 2008 Olympics in China may fuel deforestation in New Guinea according to an article published last week in the Jakarta Post. The article reports that a Chinese company has asked the Indonesian government for permission to establish a timber processing factory in Indonesia's Papua province to produce 800,000 cubic meters of merbau timber in time for the Olympic games to be held in Bejing. Merbau — a dark hardwood found in the rainforests of New Guinea — is used for hardwood floors and currently commands prices of up to US$138 per square meter, making the proposal potentially worth more than a billion dollars.

Timber hungry China moves into Africa — 4/20/2005
With its projected growth rates, China will soon surpass the United States in wood consumption. This voracious appetite for timber is threatening tropical forests around the globe but nowhere is this more apparent than in Africa where China is increasingly focusing its development efforts and adding fuel to a booming trade in illegally harvested timber.