It is regarded as the deadliest Ebola outbreak in human history: the 2014-2016 epidemic in West Africa claimed the lives of 11,325 people and resulted in 28,652 suspected, probable, and confirmed cases of infection.

Within the past twenty years, the virus has also taken a severe toll on gorillas and chimpanzees, our closest relatives. A 2011 publication “Consequences of Non-Intervention for Infectious Disease in African Great Apes” asserted that “[o]ver the last two decades the Zaire strain of Ebola has killed roughly one third of the world’s gorilla population and only a slightly smaller proportion of the world’s chimpanzees”.

With such devastating impacts to both human and wildlife populations, how can outbreaks of zoonotic diseases such as Ebola, which are transmitted to humans from wild animals, be prevented?

It turns out that one way to reduce the risk of viral infection and transmission is through sustained wildlife monitoring that allows for the early detection of zoonotic diseases in wild animal populations.

How early detection can save lives

Mongabay-WildTech spoke with Dr. Nancy Sullivan, a viral immunologist with the Vaccine Research Center at the National Institutes for Health (NIH). Sullivan was part of an international team of researchers led by the Wildlife Conservation Society (WCS) in 2005 to develop a noninvasive method of detecting antibodies against the Ebola virus in great apes.

“If surveillance [in wildlife populations] had been ongoing in Liberia and Guinea,” she noted, “it’s possible that the detection of the virus in an animal reservoir may have permitted implementation of public health policies to reduce exposure of humans to these animal vectors…The reservoir is [a host in which] the virus replicates to maintain its existence. It’s an animal [for which], for a virus like Ebola, the virus may not be lethal.”

The study, based on early detection techniques of antibodies specific to the Ebola virus that involves the collection and analysis of  gorilla dung samples, has provided conservationists and public health experts with invaluable insight into Ebola virus exposure and infection in wild apes.

Between 2005 and 2007, the researchers set out to five separate sites in the Republic of Congo to track gorillas and collect fecal samples, once they had visually or audibly confirmed the gorillas’ presence. Researchers used a “chemiluminescent western blot assay” to detect antibodies in the dung samples that are specific to the Ebola virus. The researchers adapted the immunological assay for Ebola virus antibody detection through a tedious process to ensure the test’s sensitivity and specificity. 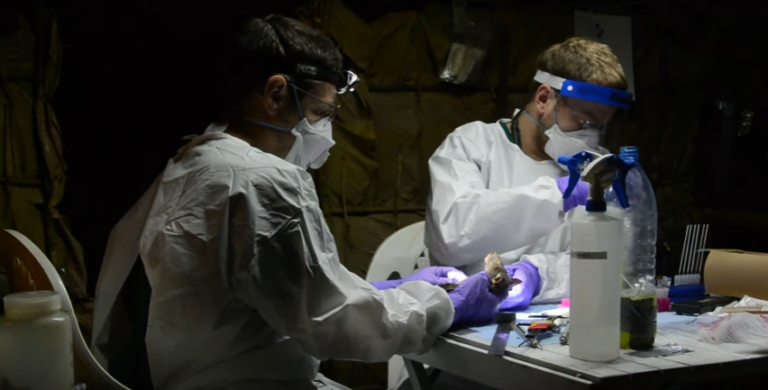 Scientists in Central Africa are evaluating the presence of the Ebola virus in wild fruit bat populations over time by capturing, sampling, and releasing the bats
Photo credit: WCS, “New Method Developed to Detect Ebola Virus”

In a 2014 interview, Dr. Ken Cameron, a field veterinarian with Wildlife Conservation Society (WCS) also involved in the study, explained how the team “determined that wildlife could survive Ebola by finding antibodies. Both humans and other animals, when they’re exposed to a virus or a bacteria or other pathogen, they produce antibodies, and those antibodies protect them the next time they’re exposed to that same disease.”

The close, early, and large-scale field monitoring of pathogens across wildlife populations is a critical step towards preventing wildlife-to-human disease transmission and the development of an outbreak amongst human populations, though finding the funding for such initiatives may be difficult.

According to Sullivan, “the observation that Ebola antibodies are found in apes means that there are apes who are exposed but survive.”

Despite findings that Ebola outbreaks have devastated gorilla populations in the wild, Sullivan added, “Since there is little evidentiary data to document widespread death of apes from Ebola, it is important to use such techniques to track infection rates in apes.” 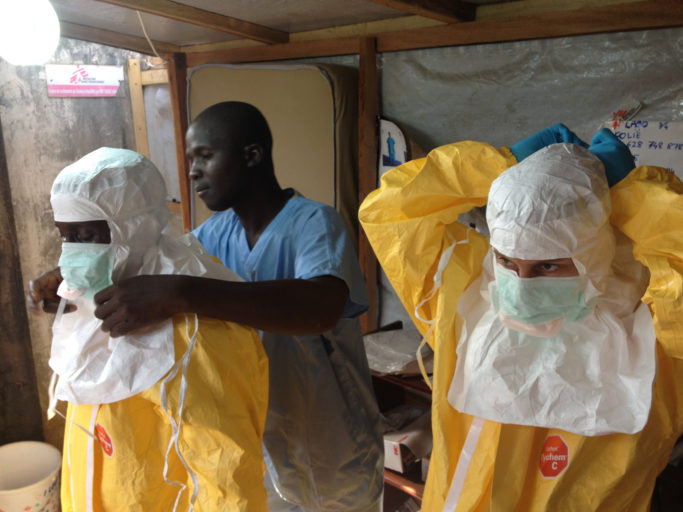 The World Health Organization (WHO) reported that the source of the 2014 epidemic, which originated in Guinea, was linked to human-wildlife contact (or more specifically, human-bat contact) and forest loss.

The organization stated that “[m]uch of the surrounding forest area has…been destroyed by foreign mining and timber operations. Some evidence suggests that the resulting forest loss, estimated at more than 80%, brought potentially infected wild animals, and the bat species thought to be the virus’ natural reservoir, into closer contact with human settlements.”

In the case of primates, the Central African illegal trade in bushmeat threatens not only the lives of gorillas and chimpanzees, but also the health of humans that come into contact with, or consume the meat of wild apes. In fact, the 2001-2003 Ebola outbreak was caused by human contact with animal carcasses, including those of gorillas and chimpanzees, that had been infected with the virus.

The research has improved scientists’ understanding of the effects of wildlife health and mortality on human health, as well as the relationship between habitat loss and zoonotic disease transmission. The findings suggest that monitoring of great ape and bat populations in the field using technological and scientific advancements in disease detection is key to reducing the risk of wildlife-human transmission of Ebola and other pathogens.

Sullivan stated that “[t]here are many infectious diseases causing morbidity and mortality in great apes, and if we want to use conservation dollars in the best way possible to protect great apes, it is important to assess is whether [Ebola] really is a primary threat, or if other pathogens, or other causes (hunting) explain declines in ape populations.” 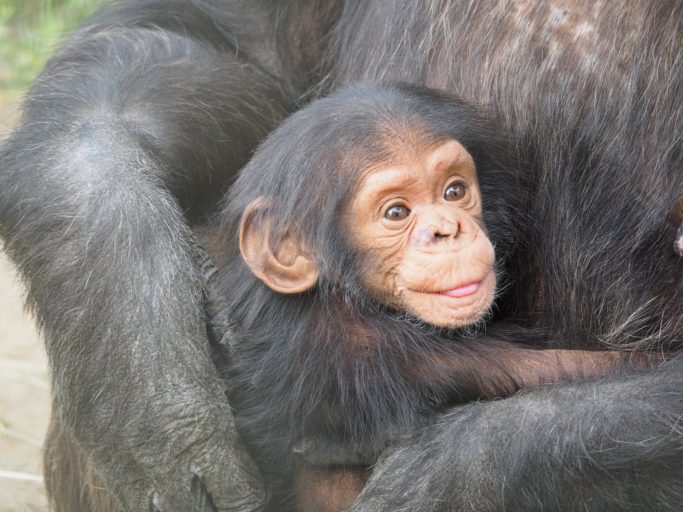 Like gorillas, chimpanzees such as this mother and baby, are at risk of Ebola virus infection Photo credit: Stefan Roelofs via Creative commons license

According to Sullivan, this initial research tested whether the dung sampling technique could confirm the presence of Ebola antibodies in great apes. “[T]he first study was not designed to test for prevalence” of the virus in apes, which would require genotyping, a laboratory technique used to examine genetic material, to identify the individual animal correlating to each sample to ensure that the samples collected do not duplicate results from the same individual. “Tracking the Ebola virus in wildlife to prevent Ebola in humans would have to be automated in some way to allow high throughput of analysis in animals,” she said.

This automation would include would require a much more rapid test to detect Ebola antibodies. “Instead of an assay that takes months, it would have to be done in real-time, automated in some way that allows it to be done fast,” Sullivan added.

In order to assess whether the Ebola virus, specifically, is a primary threat to great apes, Sullivan notes that “one would have to a) find a large number of great ape carcasses replicating the virus, from which you can recover the Ebola virus and put it into a cell system to show that the virus replicates, and b) [conduct] comprehensive assessments to understand if Ebola is the primary cause of mortality among infectious disease and test for other diseases known to affect great apes.” 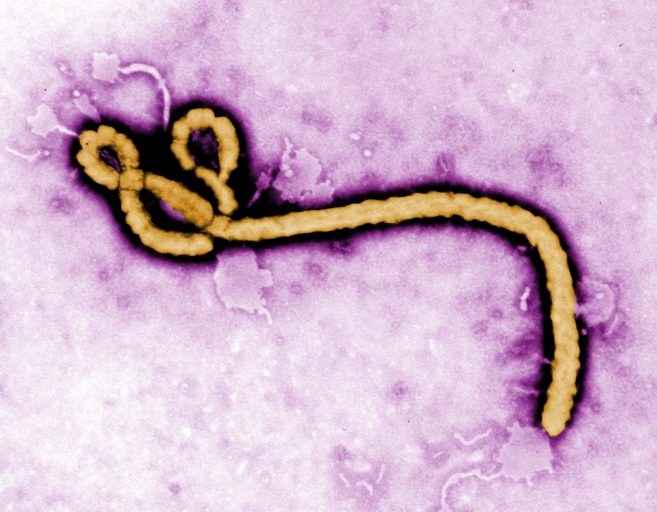 From wildlife monitoring to disease prevention

“It’s really stunning that a single antibody can protect against Ebola”, said Sullivan, in an interview with Nature.

Although Dr. Sullivan was not able to comment on the recent developments and applications of antibody detection, it was reported last month that a new vaccine has been developed. The vaccine, which was determined to be “100% effective against the disease” in chimpanzees, could also serve to immunize wild gorillas, either through the administration of oral vaccines, or through “remotely operated sprays or darts”.

These hopeful results, combined with further advances in deployment, suggest new opportunities to prevent and slow the spread of disease in areas where humans and wildlife are found in close proximity.