Tapping into evolutionary responses to guard crops against elephants 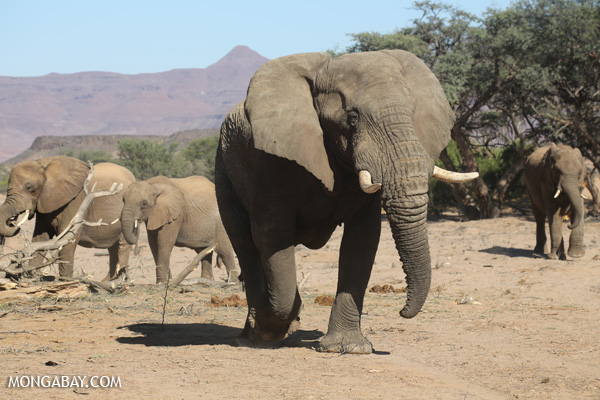 The search for effective measures to reduce human-elephant conflict is a top priority for wildlife managers and a significant challenge. Ongoing conflict incidents exacerbate anti-wildlife sentiments among rural populations, as conflict events can lead to the deaths of both people and elephants. The continued expansion of development and agriculture into traditional wildlife grazing lands pushes elephants into more frequent contact with people and crop fields.

Many methods, such as electric fences, chili powder, and crop guarding, have been used, with varying degrees of success, to deter elephants from approaching and eating crops. The most effective human-elephant conflict mitigation strategies employ multiple methods of elephant deterrents to prevent habituation to any one strategy (Parker et al 2007). A recent study in India suggests there may be a new method to add to the mix.

In a paper published in 2013, researchers Thuppil and Coss from the Animal Behavior Graduate Group at University of California at Davis investigated the use of playback calls to elicit anti-predator responses in wild Asian elephants. Similar studies have used playback calls to look at these responses during the day (McComb et al, 2005), but this is the first formal study to investigate night-time anti-predator behavior in elephants. The group used tiger and leopard growl playbacks, which were triggered by the movement of elephants as they attempted to crop-raid in fields around Bandipur Tiger Reserve and Wayanad Wildlife Sanctuary in southern India.

The group used a battery-powered, 200 W PylePro waterproof speaker system, which was strategically positioned 50 meters ahead of the trigger point. An infrared sensor activates the speaker system, which remains off until it is tripped in order to conserve battery power. It was unclear how the infrared sensor was positioned to avoid accidental tripping, but positioning it at mature elephant height and reducing sensitivity would help exclude movements by smaller species.

While all playbacks eventually evoked a cautious retreat away from the sound source, analysis of the immediate reactions revealed some surprising trends. It appeared elephants were distinguishing between the tiger and leopard growls and adjusting their response according to the perceived level of threat.

While leopard growls elicited aggressive vocalizations by the elephants, tiger growls prompted a stealthy, silent retreat. Tigers are known to opportunistically prey on elephant calves, whereas leopards generally pose no threat. The difference in responses suggests that the elephants were actively weighing each threat and retreating more quickly from the more dangerous tiger.

Additional work by the team has shown the potential for wildlife conservation and applications for human-elephant conflict. The use of automatically triggered playbacks is particularly promising, given that one of the biggest disadvantages of traditional crop guarding is that farmers must stay awake and vigilant late into the night. Automatic and early-warning systems could reduce the need for constant vigilance by farmers, warn those that do stay out of approaching elephants, and enable the use of additional deterrent strategies.

McComb et al. also showed that African elephant family groups will respond strongly to lion growl playbacks. See the video below of an elephant responding to a lion growl.

Other research on elephant behavior has shown that playbacks of African bees can produce alarm calls and retreat in African elephants (King et al, 2010). Tanzania’s wildlife research arm, TAWIRI, is even experimenting with frog playbacks to protect water towers, as frogs can reportedly get stuck in an elephant’s trunk while drinking.

These great examples demonstrate how low-cost playback setups with motion sensors could be used to thwart elephants before they raid crops or damage property. Habituation is a concern, but as with any HEC method, combining and varying strategies is necessary to stay ahead of these intelligent creatures. Finding new sustainable solutions to HEC could provide a tremendous boost for conservation and increase benefits and livelihoods for local communities.