Expedition reveals the amazing nocturnal fauna in the Amazon Rainforest

by Suzana Camargo on 17 October 2022 | Translated by Roberto Cataldo

The sun has set, and darkness takes over the world’s largest rainforest. Little by little, our senses become more acute. Moisture sticks to the skin and animal sounds become more distinct to the ears. Our eyes adjust to the dim light and our feet tread carefully over the uneven terrain. But when the camera’s flash goes off, a new, pulsating and colorful world opens up in front of us.

We had tagged along with a group of Brazilian researchers in the “Amazon from Dusk to Dawn” expedition, a month-long journey led by the Project Mantis team in the Caxiuanã National Forest in Pará state, in October 2021. The expedition was funded by National Geographic and supported by the Emílio Goeldi Museum.

Its main goal was to search for new-to-science species of praying mantises and study their behavior. But it also aimed to bring to light — literally — the dazzling nightlife of the Amazon Rainforest, using innovative methods to document new aspects of the region’s biodiversity.

“Nights are cooler and calmer,” says Lvcas Fiat, creative director of Project Mantis. “As we walk slowly, our flashlights gradually reveal the forest around us. The symphony of amphibians and insects is incredible. There is mystery and electricity in the air. You never know what awaits you along the way.

“We say that not visiting ecosystems at night is like closing your eyes to 50% of our planet’s beauties,” he adds. “Few people know it, but it’s at night that the rainforest is most alive, with plenty of beings, from insects to large mammals. Colors, shapes, spectacular sounds that are rarely seen during the day.”

Amazon from Dusk to Dawn is the third major expedition conducted by Project Mantis researchers into the darkness. The first one, Mabán, took place in the Peruvian Amazon in 2019, also with funding from National Geographic. Last year’s Austral expedition was in the Cristalino Private Natural Heritage Reserve (known in Brazil by the acronym RPPN), in northern Mato Grosso state, with support from Greenpeace Brazil.

“We have focused on the Amazon in recent years, and that came to us naturally,” says biologist and Project Mantis co-founder says Leo Lanna. “After all, it’s the world’s largest rainforest. In our search for new species of praying mantis, it was natural that we ended up there, and we fell in love.”

As a result of these three efforts, the researchers have described a new-to-science species of praying mantis and are in the process of describing two more.

From the genus Microphotina, the newly described species has a translucent green body. Its scientific name, which can’t be revealed until its official publication in an article, will be a tribute to the Cristalino RPPN and the reserve’s importance in protecting that patch of forest, through which the Cristalino River flows.

Lanna says the species likely lives in the forest canopy, a habitat that’s virtually inaccessible to researchers, and where previous studies have already shown an enormous and unknown diversity of insects.

Biologist couple Silvia Pavan and Pedro Peloso were also part of the expedition. As a researcher at the Emílio Goeldi Museum’s institutional training program, Peloso has been involved in the description of more than 30 animal species, most of them from the Amazon. “My expeditions always end up covering day and night, as we have nocturnal and diurnal species of amphibians and reptiles. In the case of the Amazon from Dusk to Dawn expedition, we focused especially on nocturnal animals and the environment,” he says.

Science, technology and art for conservation

Project Mantis isn’t focused on the large animals of the Amazon, those with which the general public is usually familiar. The focus here is on the smaller ones, which, precisely for this reason, often go unnoticed by the eyes and by conservation policies.

And this is something that, with the help of art and technology, these Brazilian researchers want to change. As photographers, both Fiat and Lanna use their experience to record what they find in the forest. They explain that high-quality photos can often be taken with simpler equipment. In their latest expedition, they used a camera with an external flash and a homemade light diffuser, ensuring the black background that is typical of Project Mantis’s images.

“We practice a lot so that each of us can photograph without the other’s help,” Lanna says. “After all, when we find an animal, it usually doesn’t keep its natural behavior under a flashlight, so it has to be photographed quickly; you can’t wait for someone else to come help with the lighting, for example.”

A very high-quality close-up can reveal, for example, the arrangement of the animal’s physical characteristics, such as rows of spines. Such records are essential in scientific documentation and in speeding up the process of describing new species, which can take years and still requires laboratory analysis.

This is where ultraviolet light photography comes in. The researchers used the technique during their night explorations in the Caxiuanã National Forest, highlighting their subjects’ new colors and details.

Fluorescence is a light emission phenomenon manifested as color when an object is exposed to a certain wavelength. “Humans can’t see ultraviolet, but more and more animals have been discovered that see it,” Lanna says. “Therefore, when we study the behavior of these animals, such as interaction between prey and predators, mating courtship, and basically any communication between beings that includes the visual factor, we have to consider that there is more than the spectrum of light that we see.”

There are scientific records, for example, of a carnivorous plant for which ultraviolet fluorescence is important in obtaining food, and a species of arachnid that uses it for mating.

Bringing science closer to the people

In April 2022, after a two-year hiatus due to the COVID-19 pandemic, the TED Conference, a major ideas-sharing platform, was held again, this time in Vancouver. Under the theme “A New Era — The future beckons with extraordinary possibilities we couldn’t have dreamt of,” it featured nearly 70 speakers, including Bill Gates, Al Gore and Elon Musk, as well as the Brazilian researchers from Project Mantis.

During their 10-minute presentation on the TED stage, Fiat and Lanna showcased impressive photos of the Amazon Rainforest and its nocturnal fauna. They also highlighted the importance of using images to make science more didactic and bring it closer to the general public.

“In the flood of content and information we receive today, engaging people with science and nature is hard enough. And even more with insects!” Fiat says. “Quality photography — and, more broadly, art in its various forms — is crucial for connecting the public, engaging and transforming. There is a limit to how far a narrative or account can reach in a person’s imagination, in its connection to the topic. And when it comes to the Amazon or nocturnal biodiversity, not everyone has experienced or seen these scenes.” 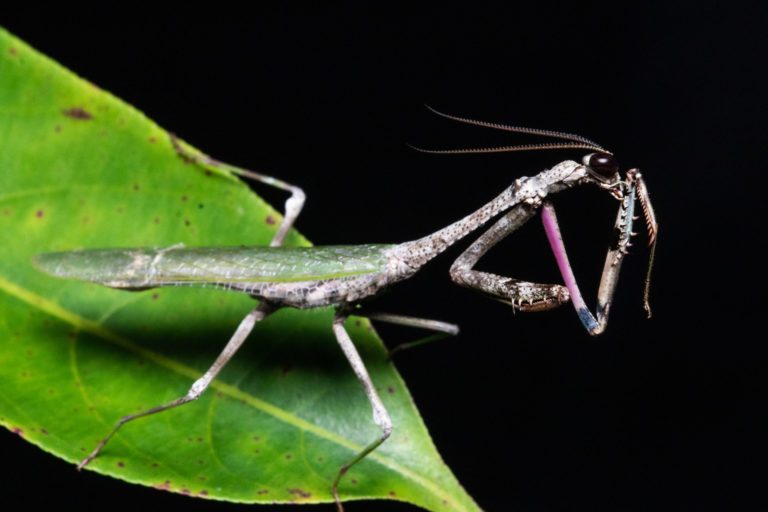 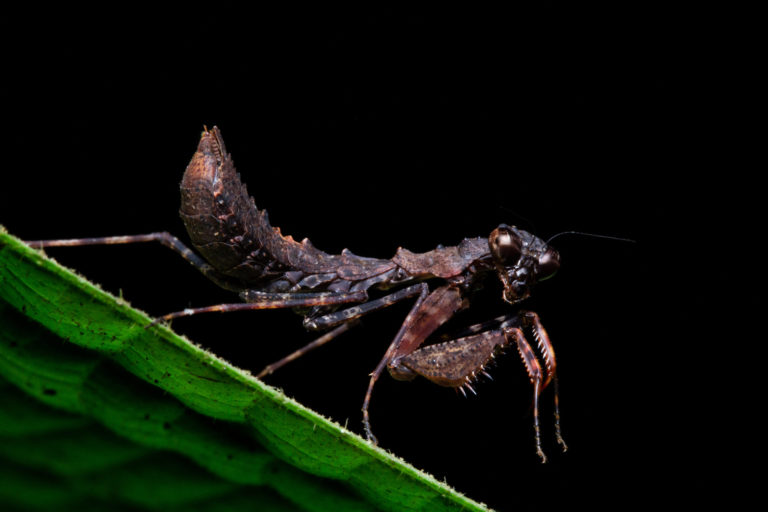 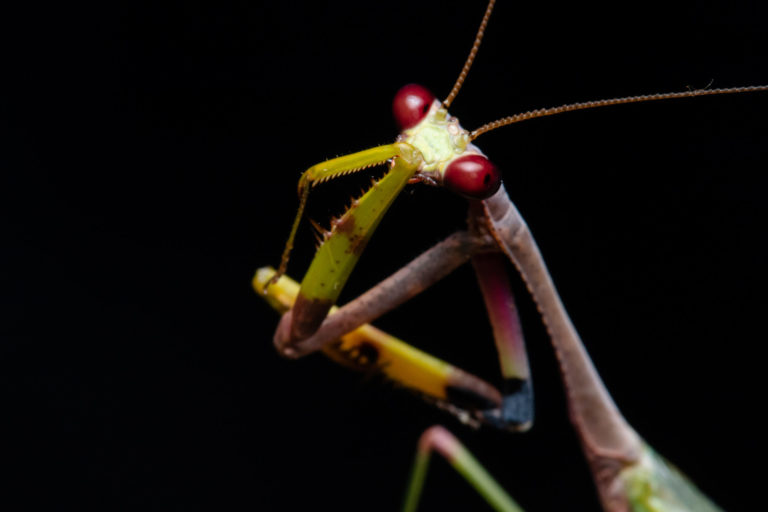 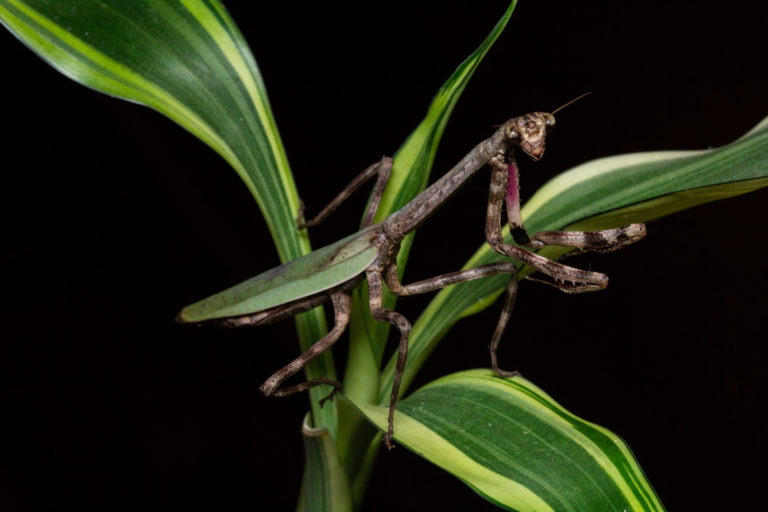 Fiat says people in the scientific community often talk about newly described species, but since good images are scarce, the general public can’t get an idea of what it looks like, or they have only a vague reference about it. Or sometimes, because of stereotypes attached to certain types of animals, they fear it unnecessarily.

“A good image imparts character and personality to the animal; it changes the atmosphere and is capable of generating change. It often happens that we have people with high aversion to snakes who gradually lose that fear by observing well-made images, with good narratives, showing the beautiful side of these animals,” Fiat says.

Project Mantis plans a new expedition for 2023, called Atlantic Amazon, which will explore the Sooretama Biological Reserve in the state of Espírito Santo, an area of the Atlantic Forest biome that’s thought to harbor praying mantis species typical of the Amazon. The researchers expect to find new species originating from the Amazonian lineages that used to live on the coast when the two forests were connected, thousands of years ago.

They also plan to launch the Amazon Reliquary next year — a collection of interviews, stories, photographs, videos and discoveries made during the expedition to the Caxiuanã National Forest, developed in collaboration with documentarian biologists from ECO360.

“We want people to be able to have an immersive experience and take a 360-degree virtual tour of the Amazon night,” says Peloso, the biologist. “Being in the forest at night feels quite different. Our perception of the environment changes; everything seems bigger and closer.”

For all the beauty revealed by Project Mantis, experts continue to warn about the ongoing devastation of the Amazon. By engaging more people in the fight for its conservation, they dream of putting an end to the destruction.

“Each acre that is devastated and each tree that falls takes with it biodiversity that cannot be recovered,” Lanna says.

Banner image: The rare kite praying mantis (genus Choeradodis), an insect that is emblematic of the Brazilian Amazon. Underneath the leaf camouflage, it displays exuberant colors and a peculiar shape, with flaps that resemble the shape of a kite. The genus occurs in tropical forests from Central America to the Amazon, but it is not often found in Brazil. Image courtesy of Project Mantis.

This story was reported by Mongabay’s Brazil team and first published here on our Brazil site on Oct. 11, 2022.