BARINGO COUNTY, Kenya – Last December in the town of Marigat, in Kenya’s central Baringo county, Paul Chepsoi had to excuse himself from a dinner of nyama choma (roasted goat) to take a call. Upon returning to the table, he explained that it was to arbitrate a dispute over stolen cows.

“If I don’t get my animals back, I’m going to find that guy and shoot him,” the livid caller, a local pastoralist, had threatened. Chepsoi, director of the Ngazi Initiative for Minorities Trust, an Indigenous human rights advocacy organization, says his priority in these situations is to de-escalate.

“First, you need to hear the wronged person out, ask him how he wants to retaliate,” he says. “Then I request that he wait two weeks [to] have some time to cool down.”

Chepsoi estimates that he has a 50% success rate in preventing conflicts between pastoralists from becoming violent. However, he says these conflicts are increasing as droughts, invasive species and firearms trafficking are on the rise in the region, creating a battle over land, resources and cattle.

“There’s increasing pressure for communities to migrate and move onto other areas with force and violence as grazing resources decline,” Chepsoi says.

Baringo has notoriously high rainfall variability and is prone to severe and catastrophic droughts, with an average trend in annual rainfall projected to only decline with time, impacting livelihoods and food security. Extreme drought events have become more severe; on average, 20% of land in Baringo is in drought at any given time.

According to a study published in the Open Access Library Journal, past droughts in Baringo, such as the most recent one from September 2021 to April 2022, have resulted in up to half of livestock populations dying. The proportion of land surface in extreme drought is expected to increase from 1% to 30% by the end of the 21st century. Throughout the Greater Horn of Africa region, a mean temperature increase of 4°C is projected to occur under a high emissions scenario by the end of the century, which would exacerbate drought events.

“Drylands like Baringo are particularly susceptible to environmental degradation, which directly [impacts] pastoralists’ resilience given their dependence on the land,” Yazan Elhadi, an agriculture and resource economist at the University of Nairobi, tells Mongabay. 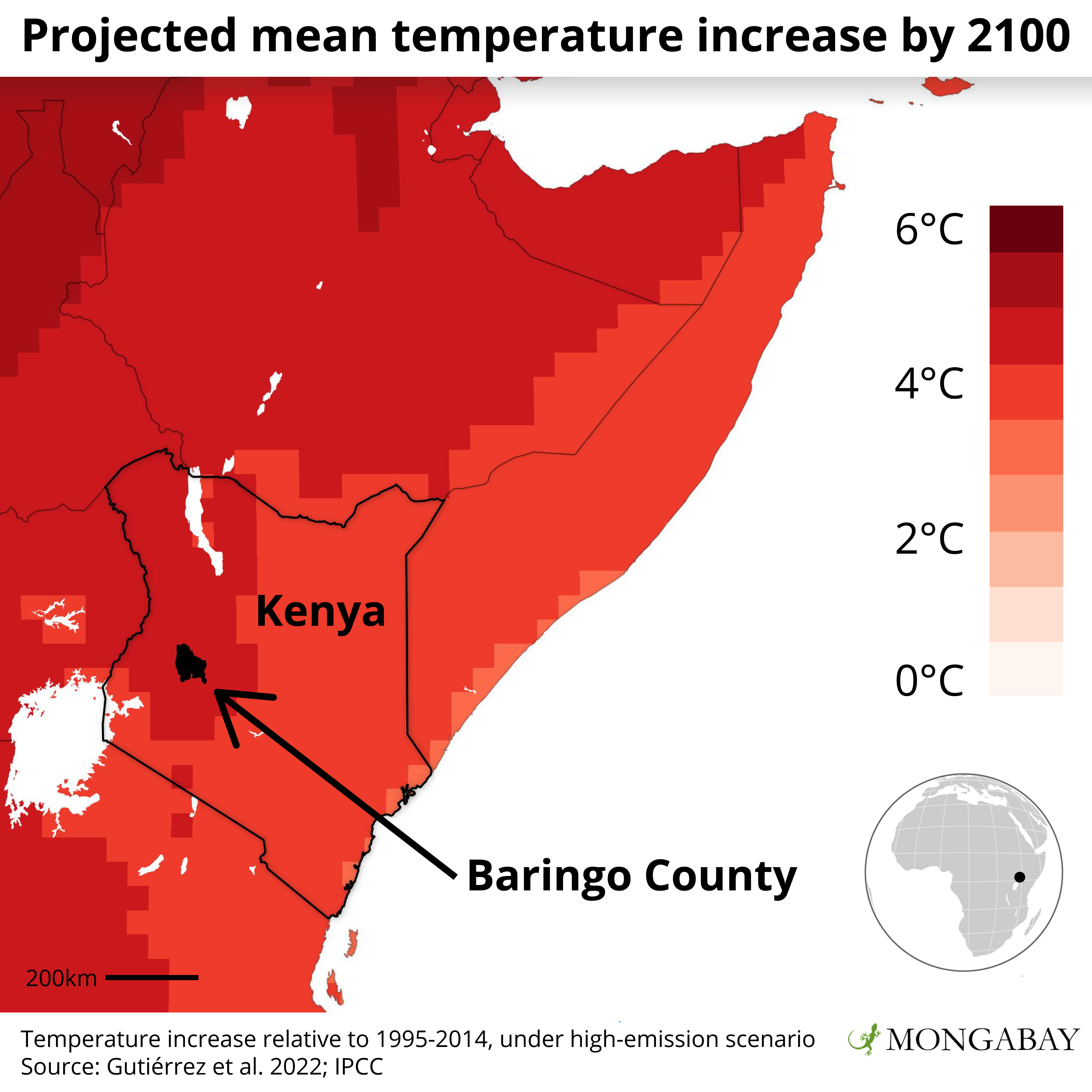 Pressure from growing human and livestock populations, plus the market demand for homogenous cattle, are also contributing to deteriorating vegetation cover, soil erosion and the decline of grassland diversity for grazing animals. The encroachment of the invasive shrub Prosopis juliflora is part of the collapse of endemic plants and grasses. This decline in viable pasture, aggravated by bouts of drought, increasingly pushes herders toward places where they used to only go as a last resort during dry seasons, leading to clashes with other pastoralists and small-scale maize farmers.

“Competition over available water and land is a major source of intercommunal tensions and a key driver of displacement,” says Nazanine Moshiri, a senior analyst in climate and security at the Crisis Group.

Climate stresses are not the only conflict drivers in these areas, she says. Long-standing ethnic tensions, underlying political and economic problems, and a history of political mismanagement also play a role and make the competition particularly destructive.

However, “it is almost certain that future pressures from climate hazards will increase conflict risks,” Moshiri tells Mongabay.

Rangers in conservancies in the region are also taking notice of the increase in conflicts along the outskirts of protected areas and updating local police.

Bringing guns to a knife fight

To many pastoral communities gleaning a living, stealing cattle is an ingrained part of the culture and an enduring feature of central Kenya. There’s an obvious economic incentive to this practice of cattle raiding, but it’s also an opportunity to display dominance. Ritualistic in origin, herding peoples such as the Ilchamus, Endorois, Pokot, Marakwet and Samburu partake in practices where boys steal cattle to prove their strength and cleverness. Animals play a crucial role in settling bride prices and signaling social hierarchy.

Despite variances in cultural beliefs across the different ethnic groups, livestock is the uniting lifeblood.

“With my 40 cattle, I’m considered poor,” Chepsoi says while laughing. “You need at least 100 cows to get some respect around here.”

For centuries, these communities have raided one another using rungus (clubs), knives and spears to conquer territory and water and grazing resources. Interethnic tensions have also contributed to who gets targeted and who doesn’t.

“It definitely is a tribe issue,” says Richard Chepsat, who hails from the majority-Tugen village of Riron in the N’garatuko area, in northern Baringo. “You don’t see the Pokot stealing cattle from one another.”

However, tensions are now surging to new heights as firearms replace traditional low-impact weapons. Even less reliable rainfall, insufficient watering points for livestock, and invasive species encroachment on grasslands have turned raids and pastoralist migration into bloody competition over land, resources and cattle.

The trafficking of weapons, starting in the 1980s from conflict zones in Somalia, Ethiopia, Sudan, Eritrea and Uganda, changed everything. The chronic instability and perpetuating civil conflicts within the Horn of Africa facilitated the cross-border supply of weapons, fueling insecurity in neighboring countries. The Turkana, a traditionally nomadic Nilotic people, were the first to bear arms in Kenya. With their AK-47, G3 and M16 assault rifles, and machine guns, these arms took cattle rustling to the next level.

Herders from other ethnicities felt inadequate with their spears, bows and arrows, and knives. Widespread pressure to obtain weapons to match the firearms of the Turkana launched Baringo into an arms race, a phenomenon that has since taken on a life of its own.

Violent conflicts in neighboring communities trigger conflict in Baringo as communities lay claim to other pastoral lands, turning them into battle zones for herders. The major cause of movement “is competition over lack of resources, which is usually worsened by drought and politics,” Katana tells Mongabay.

These conflicts then drive communities arm themselves even further, increasing arms proliferation in the region, he says.

Stolen cattle are not only kept for herding but are also sold. Cattle raiding can be a source of quick profit for poor pastoralists and herders. It’s relatively easy to convert stolen cattle into cash.

“A young raider can put money into his pocket for a whole new life that wasn’t possible before,” says Khristopher Carlson, a senior researcher at the Small Arms Survey, a research project that provides information on small arms to governments and policymakers.

This was the case for Isaac Chelwan, who was shot in 2019 when herding his 10 cows. His shattered femur had to be replaced with bone cement, and a massive scar now runs jagged across his shin. He now walks with the support of a cane. Since losing his mobility, he’s had to depend on charity.

“They attacked me from nowhere,” he says.

Kenya has one of the highest rates of civilian gun ownership in East Africa. According to a Small Arms Survey in 2012, that number is estimated to be between 530,000 and 680,000, the majority of which are likely illegal. The true number of arms out there is nearly impossible to ascertain, Carlson says, due to intricate trafficking dynamics.

“Everyone will tell you it’s the guy next door who has weapons and not admit to ownership themselves,” he tells Mongabay.

Only national police reservists, military personnel and a scattering of licensed individuals in cities and towns legally carry firearms. But in remote Baringo, among the pastoralists, most gunowners lack a license or a record of where their weapons came from.

Based on the number of illegal firearms recovered in 2010, the government estimates that pastoralists nationwide have spent 1.1 billion shillings ($13.75 million) to arm themselves.

However uncertain the number of illegal firearms in possession, they frequently make themselves known. Around 11 in the morning on April 27, several Pokot raided the cattle of Tugens community members in Loruk, 30 km (18 mi) from Marigat, near the north shore of Lake Baringo. The stole 34 cows and many other goats and sheep, in the process killing four people.

According to the U.K.-funded REINVENT project, in 2021, there were a total of 16 deaths from 19 livestock raids in Baringo county. As of April 2022, there have already been 39 fatalities from 24 violent communal incidents, half of them livestock raids.

“The police and government know this is an unprotected area, but [the military] was the first to drive away from the scene,” says Joshua Changwony, a resident of Riron village. “We have the right to be protected, and we’re not.”

In the chaotic situation following the raid, Changwony found out that his brother was one of the herders targeted. He had been shot through the shoulder and was taken to a clinic in Marigat, then a bigger hospital in Eldoret, 130 km (81 mi) away. His condition has since stabilized.

Lack of trust in disarmament

Civilian disarmament is not conducted by the military, but by the national police, which has faced ongoing challenges in tackling arms proliferation.

A lack of coordination in disarmament between regions also played a factor, he adds.

Last year, the government withdrew 20 police reservists who had been commissioned in the north of Baringo county with the express goal of restoring peace and stability. Locals said the reservists had failed to deliver on their mandate and that removing governmental security personnel before successfully disarming cattle raiders resulted in an increase in violent incursions.

Since 2000, the foreign ministers of Kenya, Sudan, the Democratic Republic of Congo, and seven other countries have signed several declarations to control and manage the proliferation of small arms and light weapons (SALW) in an attempt to address their increasingly deadly role in Kenya’s pastoral communities.

According to Changwony, his community lacks support from the government and NGOs, such as the Kenya Red Cross, one of the few aid organizations active in the region. He says aid is mostly allocated to the Pokot, given their lack of integration with the rest of society in terms of education and employment opportunities in comparison with other Baringo herders.

Given the increase in violence in the past few years, many herders say they would be better off defending themselves. Several villagers say having their own weapons is necessary for self-protection. It’s a sentiment also expressed by those working in the relief sector within Baringo.

According to Katana of the KNFP, alternative livelihoods such as agriculture could play a hand in mitigating conflict.

“Besides the traditional practices on livestock keeping by communities, opportunities abound in the livestock value chain range from veterinary services and products, to meat as well as hides and skins processing, to the production of leather products,” he says.

NGOs such as ActionAid and local government officials have also encouraged expansion into agriculture, away from a singular reliance on pastoralism.

Banner image: A young girl carrying one of her goats as they travel home at the end of the day. Image courtesy of Kang-Chun Cheng.

Related listening from Mongabay’s podcast: A growing wave of researchers are studying Africa with a new tool, bioacoustics. Listen here: