Uganda’s Kibale National Park is a primate haven, home to 13 primate species, including chimpanzees. And while these great apes and monkey species are frequently ensnared in traps laid out for other animals, conservation efforts appear to be making a difference, according to a recent study from the national park.

The park’s populations of nine mammal species, including five monkey species, grew in abundance over several decades, the study found. “It is a resounding success as a package,” Dipto Sarkar, first author of the paper in the journal Animal Conservation, said of the conservation strategy. “The Uganda Wildlife Authority [UWA] does a good job of working with people and protecting biodiversity.”

The study suggests that patrolling has deterred poaching in Kibale. However, the impacts are less clear-cut for other conservation strategies, such as livelihood programs. The study found that increasing prosperity in in neighboring communities hasn’t translated into a reduction in illicit activities like hunting and timber removal; in fact, researchers found a positive correlation between a community’s wealth and its illegal resource extraction.

In the lead-up to the Convention on Biological Diversity summit this year, a campaign to expand protected area (PA) coverage to at least 30% of the planet’s surface by the year 2030 is gaining steam. It is also focusing attention on how existing PAs, especially those in developing countries, function.

Tropical countries that host more than half of animal and plant species are often poor. More than a fifth of Uganda’s population lives below the poverty line. It falls on communities living around PAs to secure the wildlife. They also bear the heaviest costs by giving up access to traditional resources.

The 1982 World Parks Congress in Bali, Indonesia, marked a pivot away from the “fortress” model of conservation that excluded resident communities and toward approaches that incorporate the well-being of people who live near PAs. As yet, evidence about how well these approaches work is patchy.

“It’s really good that the authors have tried to pull together data on wildlife trends, patrolling and socioeconomics in the same study,” said Rob Critchlow, from the University of York in the U.K., who was not involved with the new research. “This rarely happens.”

Kibale National Park hosts one of the longest-running research stations anywhere in Africa, primarily because of the enduring fascination with our closest cousins: chimpanzees. It’s one of the few places where long-term data for these parameters are available.

Forest guards in Kibale are equipped to record infractions by inputting GPS location and the type of activity, like the presence of snares or evidence of charcoal production, into an application. Sarkar, currently at Carleton University in Canada, has worked in the national park for several years, focusing on the intersection between geography and the environment.

In the new paper, Sarkar’s team used nearly 5,000 such records from 2006 to 2016 to map out where illegal activities occurred inside the park and how patterns changed over time. They analyzed how changes in patrolling efforts related to reported illegal activity, especially hunting.

“We found that the increased patrolling done by UWA correlated with a decrease in the use of snares over our decade of monitoring,” the study authors wrote. These aren’t organized poaching operations, but rather hunting of bushmeat and sometimes farmers killing wildlife to secure their fields.

Communities living around Kibale rely on the woodland primarily for bushmeat and gathering firewood and edible plants. They eat bushpigs and duikers, a kind of antelope, but don’t traditionally consume meat from primates like chimpanzees. But snares don’t discriminate. Even if they don’t prove fatal, these traps can maim the animals for life. According to one estimate, about a third of Uganda’s chimpanzees suffer lasting physical injuries from snares.

UWA has raised the risk associated with illicit activities through better patrolling over the years. At the same time, it supports communities by providing employment and improving access to health care. What distinct impact the two had have on safeguarding wildlife is harder to pin down.

“Patrolling could be a successful deterrent to illegal activities, which I think is one of the important reasons for implementing ranger patrols,” said Critchlow, who has also researched protected area effectiveness in Uganda. “But measuring precise deterrence is very difficult.”

The study authors controlled for changes in patrolling effort by converting the recorded incidents into an illegal activity index. Still, Critchlow pointed out that patrol data may not always faithfully capture the underlying trend in unlawful activities. The assumption is that patrolling is uniform over space and time, he said, but “this is unlikely because ranger patrols will rarely perfectly cover a survey area.”

Kibale is vast, spanning 780 square kilometers (300 square miles), or the size of the New York City. The human population density in areas adjoining Kibale increased more than tenfold between 1959 and 2002. A growing population is one reason for the increased pressure on the PA, driven by ever-growing demand for food, construction material and firewood. 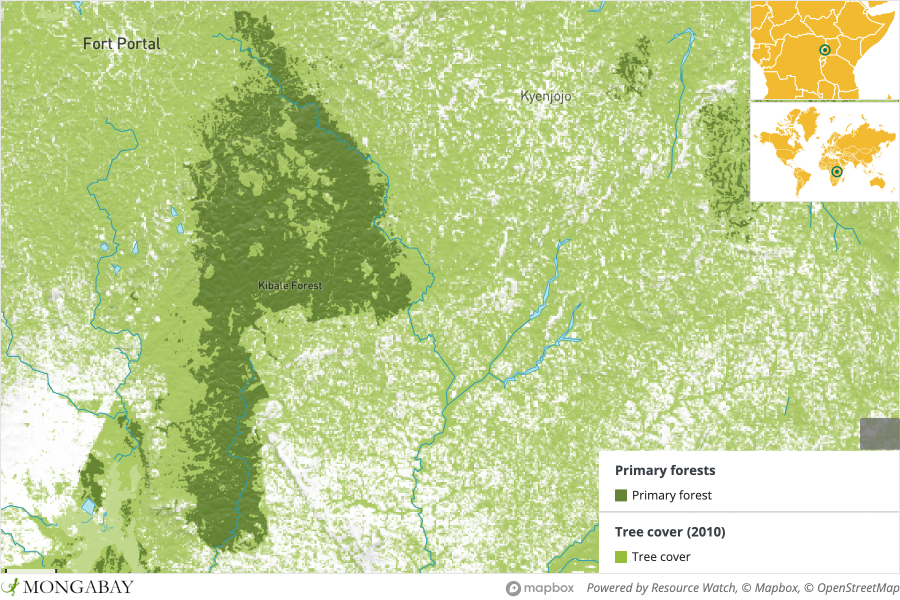 The researchers created a profile of the communities using surveys done by other research groups in 2006, 2009 and 2012, pulling data on park-linked employment, livestock ownership, and housing. They compared it to trends in illegal activity around the time of the surveys.

The team found a positive correlation between the wealth in neighboring communities and illegal resource extraction. “We know that as communities get more wealthy across the world, their protein consumption goes up before it plateaus,” Sarkar said. This could translate into higher demand for bushmeat, the main source of protein for the communities.

Sarkar noted that a long-term study of these consumption trends would need to take place over generations.

The findings complicate the notion that targeting poverty automatically reduces dependence on protected areas. Yet, Sarkar and Critchlow both emphasized the need to continue investing in community-based programs.

“The forest as a fortress model is so bad for communities living around the park; we would rather have community-based conservation,” Sarkar said. “That is the ethical thing to do.” If it doesn’t demonstrably set back conservation goals, community well-being is worth pursuing, the authors argue in the paper.

Supporting communities could also be the most sustainable path in the long run.

“In the next 10 years, we need to come up with new ways of community engagement,” Sarkar said.

He said setting up more poultry farms is one option to meet the growing protein needs of communities as they move out of poverty.

Ecotourism may not sustain PAs because many do not boast charismatic species like chimpanzees. The COVID-19 pandemic has also highlighted the drawbacks of relying too much on tourism revenue. According to Sarkar, more research stations could help bring people into the fold. “We don’t want them just to be field assistants,” he said. “We would like to like them to have a path to becoming world-renowned researchers.”

From that perspective, better living standards, more education and awareness would allow residents to play a fuller role in conservation, he said.

There’s another reason why decoupling wildlife protection from what could be considered development goals can backfire. “Unless biodiversity aims and well-being of the community are tied together, the capitalistic forces which mostly drive human well-being will overwhelm conservation efforts,” Sarkar said. “At some point, people will be like, why protect the forest? Let’s clear-cut the forest and build more factories.”

Malavika Vyawahare is the Africa staff writer for Mongabay. Find her on Twitter: @MalavikaVy