by Malavika Vyawahare on 26 October 2021

As the annual meeting of the world’s most recognizable ethical wood certifier, the Forest Stewardship Council (FSC), kicked off on Oct. 25, environmental NGOs accused the body of failing to protect forests and indigenous groups.

Drawing on years of investigation, U.K.-based NGO Earthsight highlighted problems at FSC-certified concessions ranging from forest destruction to human rights abuses. An open letter signed by NGOs including Greenpeace, Environmental Investigation Agency and Rainforest Action Network said these are not stand-alone cases but point to systemic issues with certification.

The FSC was born in 1993 with the backing of WWF and Greenpeace. In 2018, Greenpeace International decided to part ways with the FSC and this year it published a report arguing that the certifier effectively “greenwashed” forest destruction.

“Alone, FSC cannot solve all the problems resulting from illegal timber trade and poor forest management,” the certifier said in response to the open letter. “The fight against any activities that harm the world’s forests requires a joint effort by all actors and stakeholders.”

Certifications help companies adopt an eco-friendly image, attract discerning, higher-paying customers worried their choices are chipping away at the Earth’s precious rainforests, and meet requirements to access key markets, like the EU.

The 2021 Greenpeace report highlighted a trend of increasing deforestation and degradation despite the expansion in certification. The open letter released on Oct. 25 lays down how the FSC fails to protect some of the most valuable forest ecosystems, from temperate forests in Russia to tropical rainforests in Indonesia and the Democratic Republic of Congo (DRC). 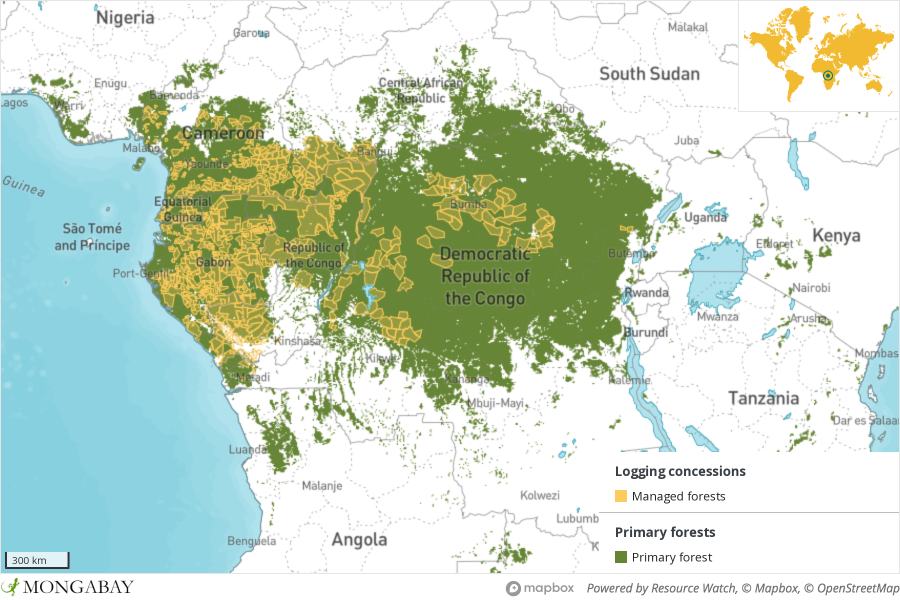 In the Congo Basin, which hosts the world’s second-largest rainforest after the Amazon, the sustainable wood certifier appears to be losing ground, even as deforestation continues to rise.

Meanwhile, the destruction of primary forests in the Congo Basin is accelerating; between 2012 and 2019, the rate of loss more than doubled, according to Global Forest Watch (GFW) data.

Shifting agriculture is the leading driver of deforestation in the region, but commercial logging is an important and related catalyst. Industrial timber extraction induces forest destruction through tree felling and opening up otherwise inaccessible forests via roads and other infrastructure. In 2018, about a fifth of the Congo Basin rainforest was within 1 kilometer (0.6 miles) of a road, compared to only 11% in 2003.

A 2020 study in the journal Ecological Economics suggests that certification may not be the most critical factor  in stemming deforestation.

Except in the Central African Republic, companies in the region are required to develop a forest management plan (FMP) within three years of receiving logging licenses. In practice, FMPs are usually approved within about nine years after permits are granted, but the longer they are in place the higher the chances they will curb deforestation.

The study also found no evidence of an “additional benefit” of an FSC certification for a concession that already has an FMP, though the authors acknowledged that logging concessions with FSC certification could be more likely to implement their forest management plans.

The FSC lays down standards but doesn’t undertake certifications itself; instead, it accredits other bodies. Logging companies retain these agencies. According to a Mongabay analysis, auditors, even when they adhere to the FSC’s benchmarks, have leeway in determining what is “good forest management,” diluting protection.

Sylvain Angerand, a tropical forest specialist with the French NGO Canopée, another signatory to the letter, said at a conference held earlier this month that the FSC fails to protect primary forests.

The conference was organized by the International Association of Francophone Mayors (currently headed by Paris Mayor Anne Hidalgo, who is running for president in next year’s French elections).

“I am very disappointed in the FSC. It should protect primary forests more,” Angerand said. “You can’t manage a primary forest in a sustainable way. You can’t log a forest which has never been logged and then say, we’ll plant a few more trees.”

The FSC is, at present, the only certifier that requires preservation of intact forest landscapes (IFLs), Aurélien Sautière, executive director of FSC France, told Mongabay in an emailed response. He said that companies have to protect the “vast majority” of IFLs in their forest management units. However, “a vast majority” can mean anything from 50 to 80%, depending on what the stakeholders of a particular concession decide.

Certifications promise more than just forest preservation. FSC guidelines, for example, also cover working conditions and the well-being of communities that traditionally use these forests. But stricter implementation of certification rules and regulations can sometimes have the opposite result, curbing communities’ access to forests and intensifying conflicts.

The FSC’s release on October 26 encouraged whistle-blowers, including NGOs and journalists, to file complaints to alert the organization about potential transgressions, adding that the best way to prompt changes was to become an FSC member.

Investigations by Earthsight and Greenpeace in the Congo Basin have detailed human rights abuses by companies in the DRC and clearing of virgin forests in the DRC and Gabon. In 2011, when villagers protested against logging company Siforco’s failure to build a promised school and clinic, the logger called in the police. The police response allegedly led to a protester’s death and the rape of women and minors. The FSC’s association with Siforco’s parent company at that time, the Danzer Group, damaged its credibility and violated its own policies, Greenpeace said.

Angerand also argued that improving quality control of extractive activities does not address the underlying power imbalance that makes them possible. Communities often don’t have a seat at the table when the forests they depend on are marked for timber extraction. “Are indigenous peoples in a position to say: I don’t want this concession on my doorstep?” Angerand said. “They can’t, can they?”