by Elizabeth Claire Alberts on 15 October 2021

In April 2021, authorities in the Philippines made a notable discovery. On a beachfront property on Sitio Green Island in Palawan province, they found shell after shell of giant clams, all protected species, laid out on the sand. The stockpile of shells weighed more than 200 metric tons, and their commercial value was estimated at around 1.2 billion Philippine pesos ($23.6 million), making this the most substantial confiscation in Palawan.

This seizure wasn’t an isolated incident. In the past five years, authorities have reported making 13 similar seizures of clamshells across the Philippines, where federal law prohibits the gathering, possession or trade of seven of the 12 known giant clam species. Violators face fines or imprisonment.

The frequency of these seizures led investigators working with Netherlands-based NGO Wildlife Justice Commission (WJC) to identify the giant clamshell trade as a “cause of concern.” A new report released Oct. 6 by the organization suggests the trade most likely has links with organized crime syndicates. It could also be endangering elephants due to the possibility that carvers are using giant clamshells as ivory substitutes, the report says. It also pinpoints China and Japan as potential markets of concern, although it notes that very little is known about the trade in these countries.

“We thought this was an important issue to flag,” Olivia Swaak-Goldman, executive director of WJC, told Mongabay in a phone interview. “Giant clams are not quite as charismatic as other iconic species … and they often get overlooked. And yet, the impact of their illegal trade can be really large.”

‘Filled to the brim with shells’

Mythologized as “man-eaters,” giant clams are the world’s largest shellfish. The biggest of these giants, Tridacna gigas, can grow to be about 1.2 meters (4 feet) wide and weigh about 226 kilograms (500 pounds), which is about half the weight of a grand piano. Giant clams mainly exist in shallow coral reef systems in the Pacific Ocean, Indian Ocean, South China Sea and the Red Sea, with the highest diversity of species occurring in the Coral Triangle area in the South Pacific.

For centuries, people living in coastal communities in Asia and the South Pacific harvested giant clams for their meat. But in the last 50 years, there has been a considerable increase in the illegal poaching of clams for luxury food, the aquarium trade, and the ornamental carving industry, the WJC report says.

The report zeroes in on that latter industry, which became highly commercialized in the 1990s. On the tropical island of Hainan, China’s southernmost province, artisans set up shops to transform giant clamshells into bowls, beads and ornate showpieces. According to the report, about 150 processing workshops supplying 900 craft shops were present on Hainan between 2013 and 2014.

Neo Mei Lin, a senior research fellow at the Tropical Marine Science Institute in Singapore, visited Hainan in 2016 to investigate the trade. When she peeked through the doorways of various warehouses, she saw ”really big” stockpiles of clams that looked like they could last for years, she told Mongabay in a Zoom interview. “You can imagine an entire house just filled to the brim with these shells,” she said.

To supply this carving industry, fishers poached clams from coral reefs by dredging or drilling into the seabed, or even using boat propellers or anchors to break apart reefs and release the clams, according to the WJC report. In 2016, satellite data showed that 104 square kilometers (40 square miles) of the South China Sea — a global hotspot for biodiversity — had been damaged by these extractive methods.

​​“The process of acquiring the materials was definitely very, very destructive to the environment,” Neo said. Not only would this extraction harm the seabed, but removing giant clams would imperil countless marine species that depend upon giant clams for food and shelter, she added.

The most commercially valuable giant clamshells are ones that have become “fossilized” after spending a long time in the seabed, Neo said, since they provide a thicker surface on which to carve. Giant clamshells also have higher value when they display rich red, purple and brown hues, or translucent jade-like shades, she said.

In 2017, Hainan province banned the trade of giant clamshells. Still, a report suggests that clamshell vendors in Hainan were still selling their goods in early 2019. 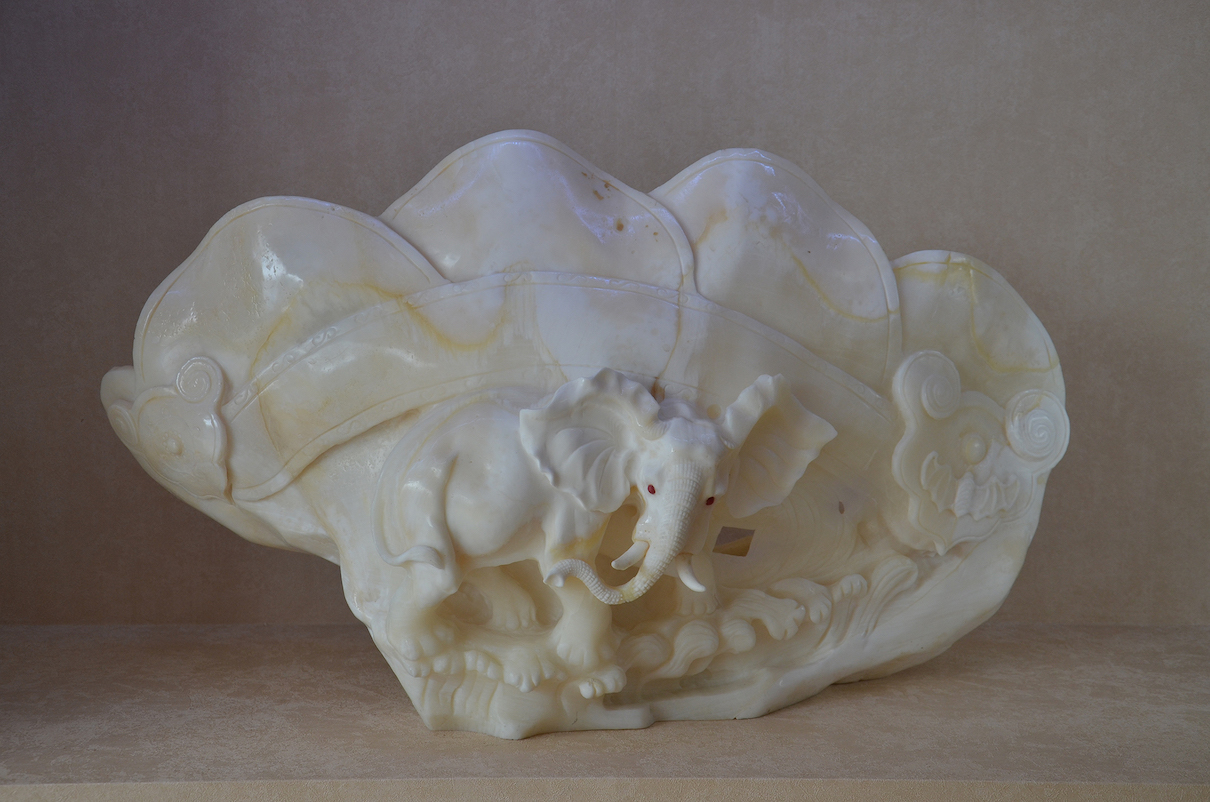 ‘Important to raise the alarm’

Concerns about the sustainability of the giant clamshell trade led officials to list giant clam species under Appendix II of CITES, the global convention on the wildlife trade, which strictly regulates their trade. But it’s unclear whether these protections are having a substantial impact on the protection of giant clams.

Right now, the only indication of the size and severity of the trade are reported seizures. Since 2016, there have been 14 seizures of giant clamshells in the Philippines, the largest one taking place in October 2019, when officials confiscated 120,000 metric tons of shells with an estimated value of $39 million. There have also been 46 seizures reported in China, but most of these cases involved “small, retail-level quantities of shells and shell crafts,” and only one was linked to the Philippines, according to the WJC report.

Despite the scarcity of information, WJC says giant clamshell traders could be involved in organized crime. This hypothesis stems from the evidence of sophisticated logistics, organization and finance required to collect and transport large quantities of giant clamshells. Seizures also tend not to be followed by arrests and prosecutions, which suggests that a “fair amount of impunity” is happening, Swaak-Goldman said.

The report also notes that 17% of clamshell seizures also contained  elephant ivory, and other types of ivory such as mammoth and narwhal, which suggests that the same criminal groups trafficking ivory could also be trafficking clamshells. Other seizures of giant clamshells contained other illegal marine products such as hawksbill turtle shell crafts, corals and seahorses.

“These are all things that need to be looked into more,” Swaak-Goldman said. “But these are the reasons that we thought it was really important to raise the alarm on this issue.”

The report also suggests that Japan is a market of concern since its government does not currently offer any protections for giant clams. Additionally, Japan has legal markets for both giant clamshells and elephant ivory. But at present, investigators have not identified any smuggling routes from the Philippines into Japan — or into China, for that matter.

Swaak-Goldman said the lack of information on the giant clamshell trade is what prompted WJC to release its report.

“What we need to do is start to fill these intelligence gaps,” she said. “And to come up with more knowledge about the smuggling routes, about the ways they operate, what are the key drivers. And the way to do that is through an intelligence-led investigation.”

Kanitha Krishnasamy, Southeast Asia director for TRAFFIC, an NGO that monitors the wildlife trade, agrees that a paucity of information is a concern, especially since the evidence shows that clamshell seizures in the Philippines are rising.

“If the gaps in intelligence and information are closed, governments would be in a much better position to respond to this problem and put in place more robust control measures,” Krishnasamy told Mongabay in an email.

“Like the trade in many species, proper regulation of legal trade and a clamp down on illegal practices is crucial,” she said. “Both these would benefit greatly from more detailed investigations and scrutiny, especially as the WJC report notes convergences with other commodities.”

Banner image caption: A warehouse in Hainan with a stockpile of beads carved from giant clam shells. Image by Mei Lin Neo.

Correction (10/18/2021): The source of information regarding clamshell shops still operating in Hainan in 2019 has been modified.