L.A.-sized tract of primary forest went up in flames in DRC province in 2020

The Democratic Republic of Congo’s Sankuru province saw record-breaking fires in 2020 — 9500 square kilometers (3,700 square miles) of land burned. More than 1,500 km2 (580 mi2) of this was old-growth forest, an area the size of Los Angeles, including extensive tracts in the Sankuru Nature Reserve.

Burnt area in and around Sankuru Nature Reserve from May 1, 2020 to August 1, 2020 during peak fire season. This interactive map can be used to track the increase in burned area by clicking on the play button in the legend.

On any given August day, NASA satellites detect 10,000 or so wildfires blazing around the world. Most of these are in Africa. They don’t raise Amazon-like alarm, because these blazes mostly arise on savanna land or farmers’ fields, part of an annual cycle of preparing existing farmland for planting.

But 2020 appears to be different. The DRC recorded its second-biggest decline in primary forest cover, according to data from Global Forest Watch, a platform developed by World Resources Institute.

The DRC is home to about half of the tropical forests nourished by the Congo River, which are second only to the Amazon in their expanse.

Forests in central DRC are under sharply increased pressure from a constellation of factors: a growing population, climatic shifts like shorter rainy seasons, and, more recently, COVID-19-linked turmoil.

These tropical rainforests that dominate much of Sankuru province give way to a mosaic of settlements, savanna and woodland in the southeast. Nearly half of the area burned in Sankuru province in 2020 sported 30%  or more tree cover, a suggestion that these huddles of trees belonged to forests.

The Sankuru Nature Reserve (SNR) was established in 2007, intended to protect this tranche of the DRC’s famed tropical forests. About 80% of the SNR is forested, but a quarter of this woodland already bears the imprint of human activities. It includes territory long occupied by up to 80,000 villagers, who mostly rely on slash-and-burn agriculture and hunting to survive. These subsistence activities are practiced throughout the province.

“The villagers don’t have tractors or agriculture equipment so they use fire,” said Nyembo Kabemba Faustin, a biodiversity specialist who has conducted research on bonobos in Sankuru. “It becomes easy to remove the trees, and to replace the forest with agricultural land.”

According to a preliminary analysis of rainfall data done by Liming Zhou, a professor of atmospheric and environmental sciences at the University at Albany and his student Yan Jiang, the Sankuru province witnessed a severe drought in 2020.

“When you burn the field at the end of the dry season, the grass is already dry, the forest is already dry, so the fire continues till it reaches the forest,” said Joachim Khonde, a researcher specializing in agroeconomics at the Institut Supérieur d’Études Agronomiques in Mukumari, Sankuru. “They [itinerant cultivators] don’t have the techniques to make fire breaks.”

Spread across 30,000 km2 (11,600 mi2) the Sankuru reserve is promoted as “the largest continuous protected area for great apes.” But it has a contested history.

Bonobos (Pan paniscus), who are members of great apes club, are found only in the dense jungles of the DRC south of the Congo River. The SNR sits at the southeastern edge of their range. It has from the start included large areas where the presence of bonobos — or indeed other large mammals — is disputed.

The reserve hosts a small population of bonobos, Faustin said. He and Khonde both described resistance from villagers living in and around the SNR to curbs put on their traditional activities like hunting, charcoal-making and slash-and-burn cultivation.

Unpaved roads effectively slice the reserve into five fragments. The fires observed along some of these routes in 2020 could be for making charcoal that serves the energy needs of a majority of Congolese people and is mostly sourced from forested areas. 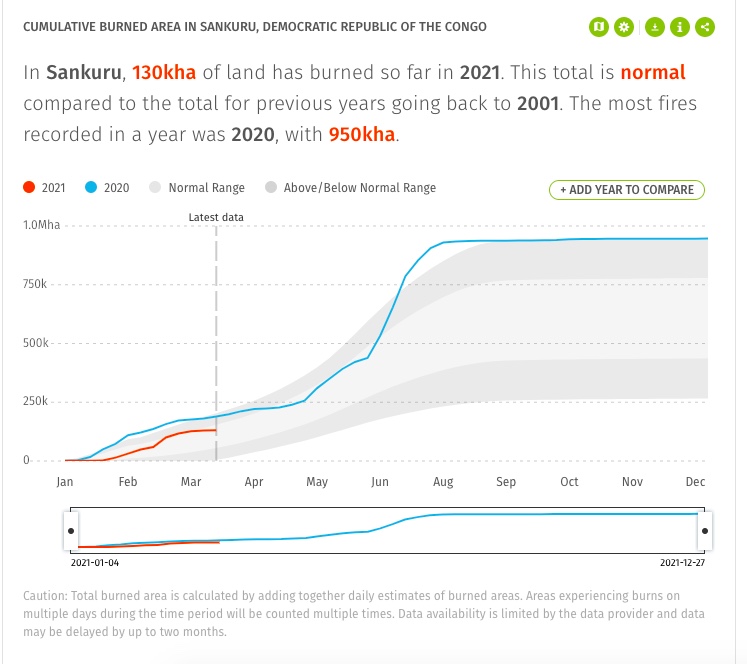 Researchers are only now beginning to take stock of what happened in 2020. While COVID-19 cases appeared clustered in urban areas, the pandemic’s ripples were felt in far-flung corners of the country. The uncertainties created by the pandemic could have pushed people toward a time-tested tool: fire.

The DRC declared a COVID-19 emergency in March 2020. Travel was restricted and large gatherings were banned. These measures to control the pandemic disrupted lives and livelihoods, deepening isolation and insecurity even as communities in Sankuru fought off outbreaks of two other deadly diseases: measles and monkeypox.

Artisanal mining, which employs nearly 2 million Congolese, also took a hit. Miners gather at promising sites, often in the hundreds, armed with basic tools to wrest gold from the earth. Bans on assembly stymied their work. The restrictions prevented movement of equipment into mining areas and muted exports of artisanal mining output.

At the same time, the curbs disrupted food supplies and the bushmeat trade.

In Tshopo province, on Sankuru’s northern border, the pandemic made it hard for large, established charcoal producers to supply their markets, according to Jolien Schure, who, along with her colleagues at the Center for International Forestry Research (CIFOR), did a rapid assessment of how COVID-19 affected the charcoal sector centered on Kisangani, a city in Tshopo province.

New producers, finding themselves shut off from other livelihoods, took up charcoal making. Loss of jobs and the closure of schools increased the availability of this mobile work force. It was one of the few ways available to make quick cash.

The pandemic untethered people from their usual work at a time when food and other essentials became more expensive. “They earned less in the same period that consumer prices went up so they really were stuck between a rock and a hard place,” Schure said.

(Banner Image: View from the River Congo between Kinshasa and Lukolela, Democratic Republic of Congo. Image courtesy of Ollivier Girard/CIFOR.)