When the Uru-eu-wau-wau were first contacted in 1981, disease and death followed shortly thereafter. With limited antibodies to fight foreign pathogens, infectious diseases like tuberculosis and measles took a disastrous toll. From a vibrant Indigenous community numbering in the thousands in the early 1900s, more than half died.

When the coronavirus epidemic arrived in Brazil in March 2020, the events of the 1980s loomed large in the community’s collective memory.

“We remember how it happened with first contact. We cannot let that happen again,” said Tari, a Uru-eu-wau-wau elder who vividly recalls the disease and violence that marked that time.

So the people of the Uru-eu-wau-wau Indigenous Territory, located in the Amazonian state of Rondônia, made the swift decision to isolate their seven villages completely from the rest of the world: No visitors, no outside contact.

As of June 1, 2021, Brazil has confirmed more than 16.5 million COVID-19 cases and 462,791 deaths, with 229,566 cases and 5,758 deaths in Rondônia, according to Johns Hopkins University. But while other Amazon Indigenous peoples have suffered greatly, the Uru-eu-wau-wau held the line, with just four minor cases.

But this is not the only grim trial they face. Along with COVID-19, the Uru-eu-wau-wau actively defend their territory against an onslaught of land grabbers, illegal loggers and miners who seek to extract resources from their federally protected territory.

The pandemic also brought another new challenge: how to continue telling their story in real time despite a self-imposed COVID-19 quarantine that included outside journalists. Without access to the media, the Uru-eu-wau-wau feared they would not be able to sustain the necessary international attention to support their efforts to defend their land from invaders.

“Self-documentation is an opportunity for us to record our own story, our own reality,” said Bitate. “There are lots of journalists who want to come here but who don’t understand anything about our way of life. This is a great opportunity for Indigenous people to learn filmmaking in order to record the story of our own people.” After centuries of outsiders extracting Indigenous stories, the coronavirus pandemic has provided a chance for the Uru-eu-wau-wau to take control of their own narrative.

Today, the Uru-eu-wau-wau people are the guardians of an expansive Indigenous territory covering 18,670 square kilometers (7,200 square miles) of mature Amazonian rainforest. They are also the guardians of three different Indigenous groups of yet-uncontacted people, living within the confines of the federally demarcated territory.

These isolated Indigenous groups are among the most vulnerable in Brazil, and are completely unaware of the ongoing pandemic. Recent events in the Uru-eu-wau-wau reserve, where uncontacted groups have begun emerging from the forest, suggest that the presence and pressures of illegal loggers and miners has been increasing within the territory. Observers point to President Jair Bolsonaro’s aggressively anti-environmental policies and anti-Indigenous rhetoric as the driver of these emboldened invasions by those involved in Amazon extractive industries.

Along with the increases in illegal logging, mining and land theft — and accompanying violence — Indigenous communities in the Brazilian Amazon now face a severe lack of public health infrastructure. SESAI, the Indigenous health agency, has undergone a process of decentralization under Bolsonaro, who on taking office in 2019 forced out 8,300 Cuban doctors who mostly served remote rural areas of the country. The administration also shifted responsibility for Indigenous health from the federal government to already-overtaxed municipal governments. On top of this, recent research points to a severe underreporting of Indigenous deaths due to COVID-19 in the Brazilian Amazon. 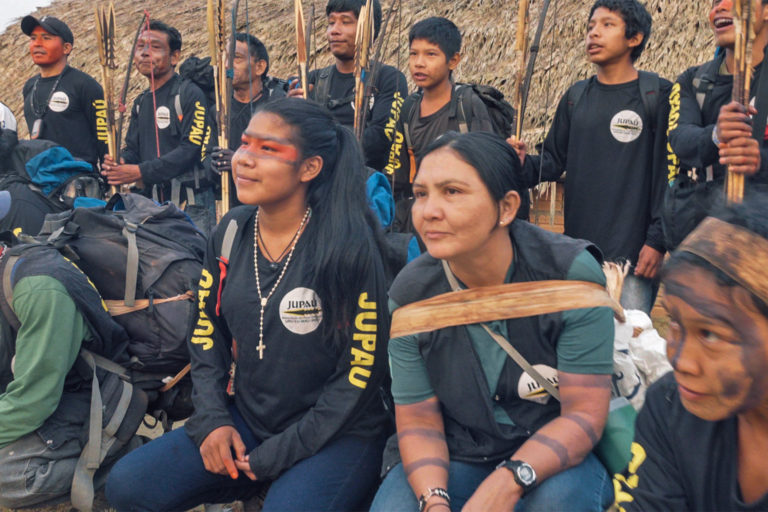 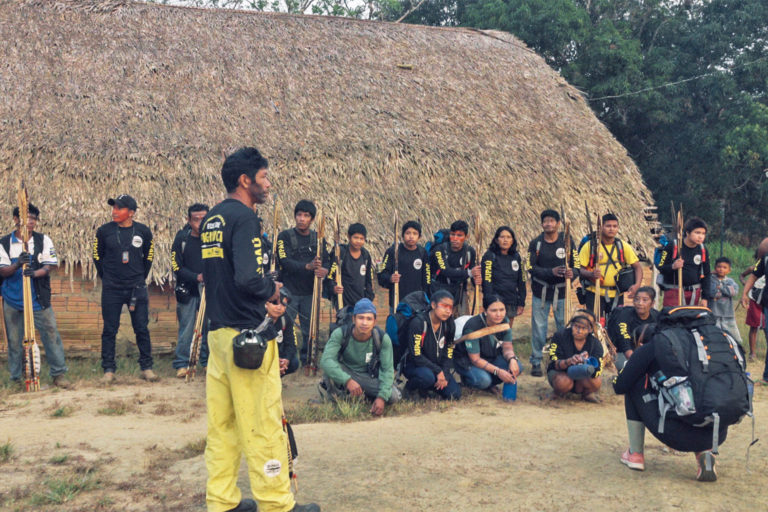 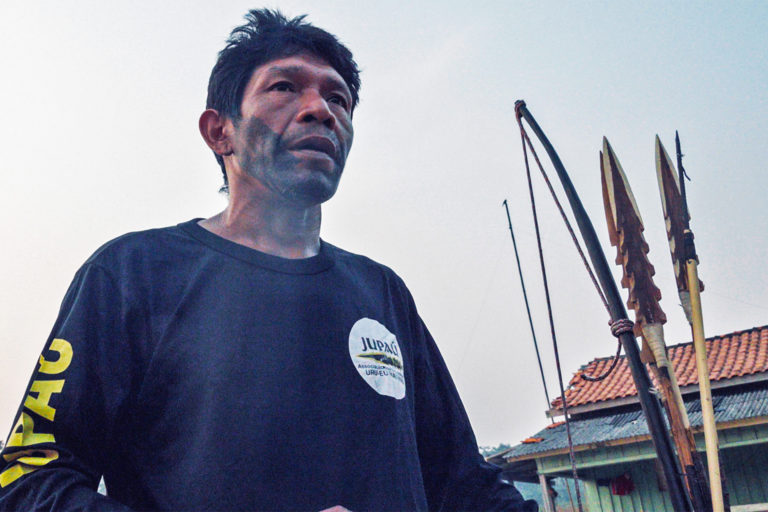 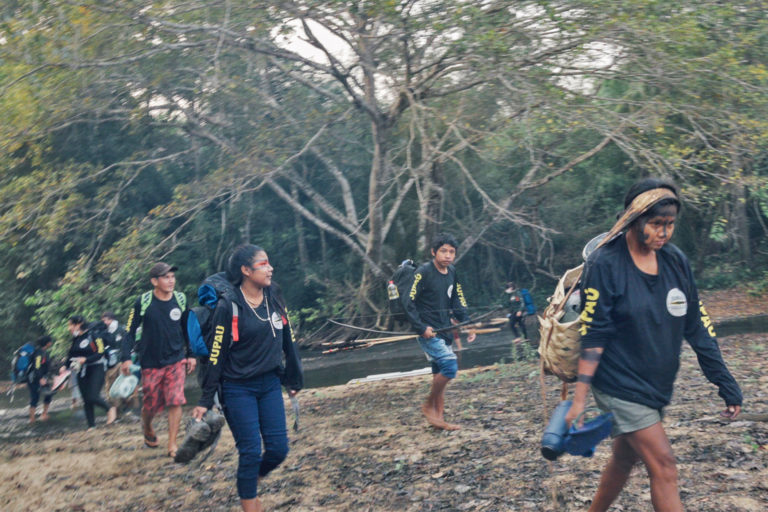 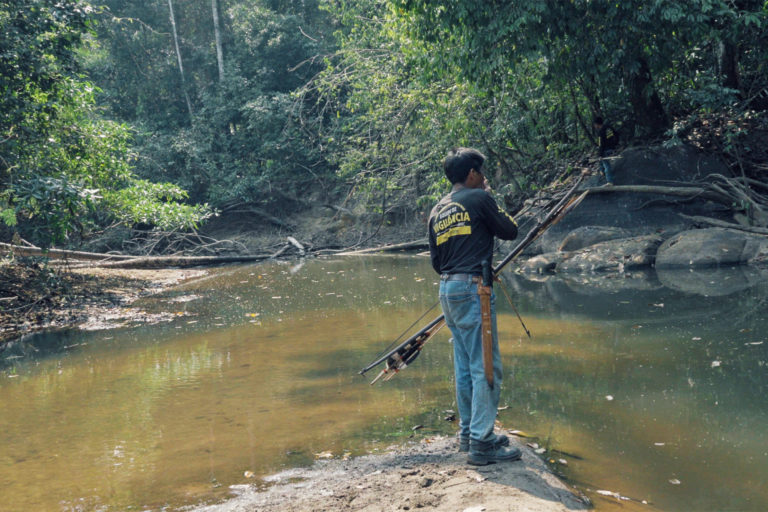 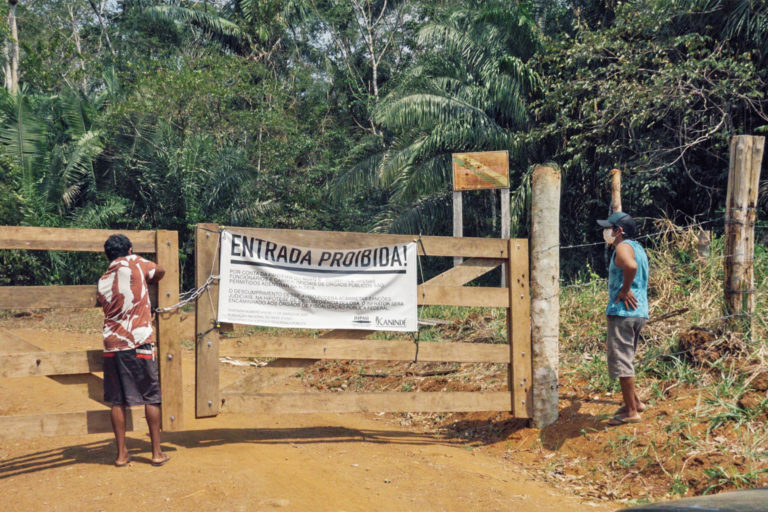 Perhaps nobody understands these existential threats more viscerally than Bitate Uru-eu-wau-wau. Bitate is the young leader of the Uru-eu-wau-wau, but he is also a descendent of two different ethnic groups: Uru-eu-wau-wau on his father’s side, and Juma on his mother’s side. While the Uru-eu-wau-wau survived immense losses of life during the period of first contact with the Brazilian state, the toll was even greater on the Juma.

After a series of violent massacres, the most recent in 1964 when rubber tappers murdered dozens of Juma men, the population of the Juma was reduced to just four individuals. Aruka Juma was Bitate’s grandfather, and the last remaining full Juma man on Earth. COVID-19 claimed his life on Feb. 20, 2021. The loss weighed heavily on Bitate.

Along with carrying the heavy responsibility of protecting his father’s Uru-eu-wau-wau community and culture, Bitate experienced the devastating loss of his matrilineal family. It was with this in mind that Bitate made the decision in March 2020 to seal off the Uru-eu-wau-wau from the rest of Brazil. His community was well prepared for the self-reliance required. For centuries they had lived off the rainforest’s bounty, fishing the many rivers that traverse their land, gathering fruit and harvesting other necessities from the forest.

After a year of isolation, the Uru-eu-wau-wau welcomed health professionals into their territory to administer the first vaccines in March 2021. Their celebratory arrival was no small feat: health workers carrying the vaccine had to travel with armed escorts provided by local police, making their way through several active invasion sites and dangerous conflict zones inside the territory.

As the pandemic raged on over the past year, illegal land grabbers had seized the opportunity to fortify their bases along the edge of the Uru territory. But in the end, the mission of mercy was successful. Every member of the Uru-eu-wau-wau population has now been vaccinated, and not a single member of the group has become seriously infected.

As the rest of the world struggles with, or emerges from the pandemic, and takes stock of the lessons learned so far, we would do well to listen to the Indigenous voices at the front lines of these intersecting cultural conflicts. Leaders like Bitate are charting new paths in environmental leadership, while asserting a long overdue control over their own story.

Editor’s note: Alejandro Smith, the author byline provided for this Mongabay story, is a pseudonym and has been used here to protect the Uru-eu-wau-wau Self-Documentation Team and its members from potential reprisals.