More than a hundred candidates who ran in municipal elections last November in cities across Brazil’s Amazonian states are on the environmental regulator’s “dirty list” for violations committed over the past decade.

That’s the finding from an analysis by Agência Pública, a nonprofit investigative journalism agency in Brazil. It found 118 of the candidates for mayor and deputy mayor in the Nov. 15 polls had previously been fined for deforestation, illegal burning, exploitation of native forest located in reserves, or providing false information to environmental agencies to cover up illegal activities. The politicians include 51 who were in office at the time of the election, and 28 who ran for reelection. 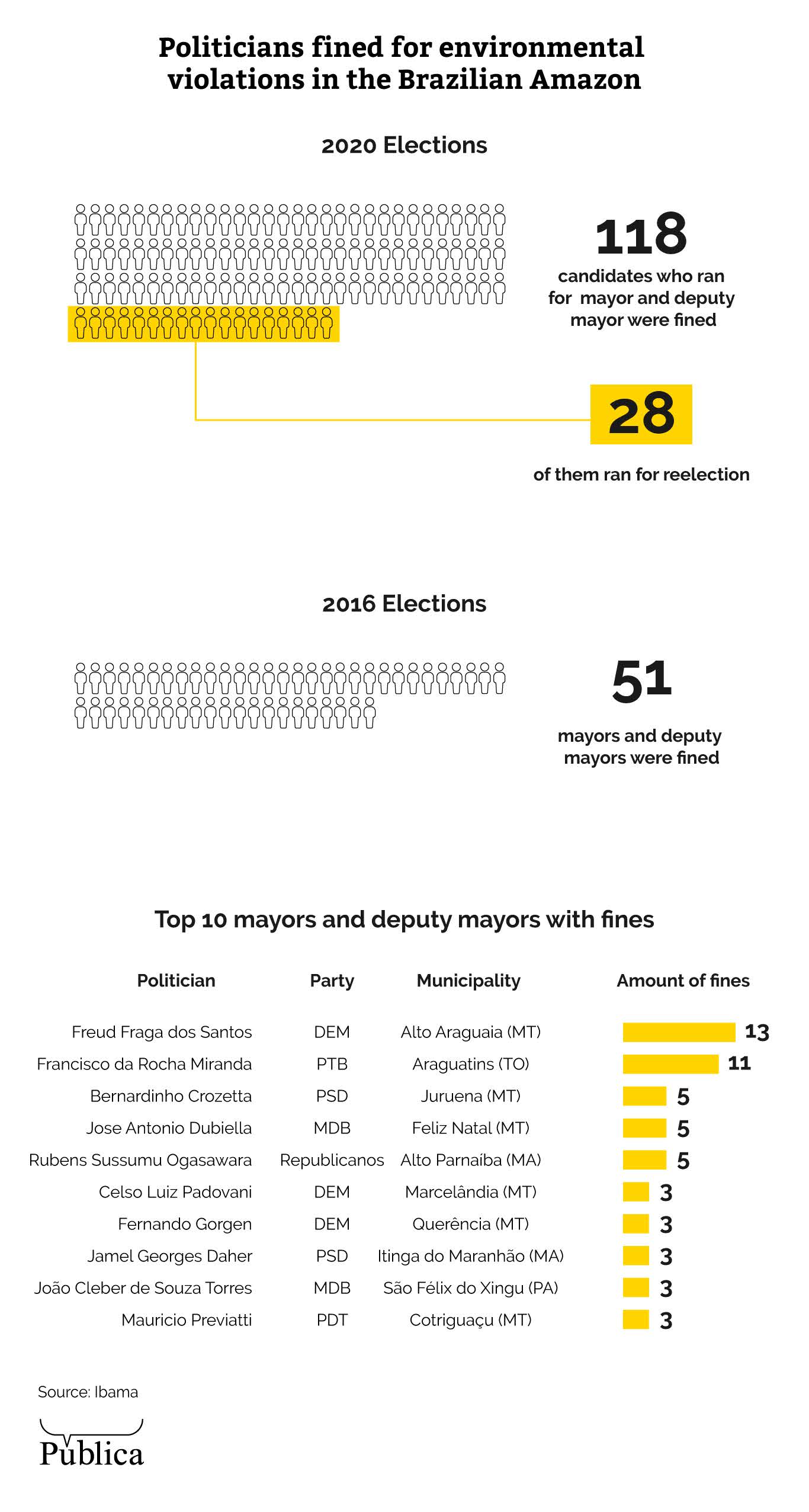 Among those fined by IBAMA, the federal environmental protection agency, were four mayors and two deputy mayors of the six municipalities in the state of Pará notorious for the Aug. 10, 2019, “day of fire” — a series of blazes set by the agribusiness sector to clear land. The politicians are Valmir Climaco, the mayor of Itaituba, who was reelected; Raimundo Batista Santiago of Jacareacanga; Valdinei José Ferreira and his deputy, Maurício de Lima Santos, from Trairão, both of them reelected; and Ubiraci Soares Silva and his deputy, Gelson Luiz Dill, of Novo Progresso. (Dill ran against Silva in the election and won.) Together, the six men have racked up fines of 7.8 million reais ($1.5 million) for environmental violations, though none were accused of having participated in the burning during the “day of fire.”

These four cities, plus Altamira and São Félix do Xingu, were responsible for 79% of the fire outbreaks detected in the state of Pará on Aug. 10 and 11 last year, according to a survey by Greenpeace.

Itaituba’s Valmir Climaco, a former gold miner and cattle rancher, was last year sentenced to four years and nine months in jail for destroying 746 hectares (1,843 acres) of native forest in neighboring Altamira between 2002 and 2004. He was found to have laundered the timber through Madeireira Climaco, a company that appears on the declaration of assets he submitted to electoral authorities.

He also has three charges against him for damage to vegetation and for carrying out works without the requisite license. Two of these charges, dating from 2012 and 2015, are still pending trial.

In 2019, the Federal Prosecution Service (MPF) sought the removal of Climaco as Itaituba’s mayor after he apparently threatened officials from Funai, the federal agency for Indigenous affairs. The officials were slated to inspect Climaco’s ranch, which sits on land claimed by the Munduruku Indigenous people, but in June 2019 the mayor said he would only receive the inspectors “at bullet point.” The following month, the Federal Police (PF) found 583 kilograms (1,285 pounds) of cocaine on the ranch.

In total, Climaco is the subject of 45 federal criminal citations, according to his declaration to electoral authorities.

From miner to mayor

A two-hour drive south of Itaituba lies the municipality of Trairão, whose mayor is also accused of deforestation. Valdinei José Ferreira, known as “Django,” was convicted in April 2020 for destroying 1,300 hectares (3,200 acres) of Amazon forest. He has denied the charge, despite IBAMA detecting the deforestation on his farm in 2012.

Ferreira has been embroiled in other environmental crimes. He was recently ordered to pay more than 43,000 reais ($8,300) in fines imposed by IBAMA in 2011 and 2012, after he was caught operating an illegal sawmill. He has also been accused by prosecutors of illegal logging inside a conservation area in Itaituba in December 2007. A verdict is pending in that case.

Santos has also been accused by prosecutors of illegally entering another national forest, in Trairão, in 2014 with machinery intended for logging, without the required authorization.

In Novo Progresso itself, where the mass burning of the “day of fire” was likely coordinated, the mayor and deputy mayor have also been fined by IBAMA for environmental violations.

Ubiraci Soares Silva, the outgoing mayor, is a defendant in a lawsuit filed by IBAMA since 2015; as of 2017, he has been liable for fines exceeding 1.7 million reais ($328,000), according to the newspaper O Globo, for the illegal occupation of land inside Jamanxim National Forest.

Dill claims the fines are a form of retaliation for his actions in defense of farmers and ranchers in the region. “It’s because I denounce the irregularities of these environmental agencies that are burning producers’ machinery and producers’ properties,” he said.

Dill is himself a rancher, with 2,473 head of cattle valued at 1.9 million reais ($366,000), according to his declaration to electoral authorities.

Twelve of the 28 mayors and deputy mayors of municipalities in the Brazilian Amazon who ran for reelection are farmers, ranchers or loggers.

Fernando Gorgen, who was reelected as mayor of Querência in Mato Grosso state, declared 17.2 million reais ($3.3 million) in assets to electoral authorities. This figure includes his shareholdings in two cattle-breeding companies in the state of Tocantins and a farm in Querência. His wealth grew 260% in the four years he was in charge of the municipality.

Gorgen and his brothers were fined in 2018 by the Mato Grosso state environmental office for defrauding deforestation permits. IBAMA accused them of responsibility for the clearing of more than 5,000 hectares (12,400 acres) of the Amazon forest. Gorgen claimed he wasn’t the owner of the farm where the illegal deforestation had occurred, saying he was “mistakenly pointed out as one of the [land clearing] protagonists by Operation Siriema,” a law-enforcement operation carried out by IBAMA and the Mato Grosso state prosecutor’s office.

In Nova Canaã do Norte, another municipality in Mato Grosso, the reelected mayor, Rubens Roberto Rosa, was also fined for an environmental violation while in office in 2017. Like Gorgen, he is a cattle rancher and a millionaire: for last year’s election, he declared an inheritance of 25.9 million reais ($5 million), which includes 7,334 head of cattle and five farms.

In 2013, he was named on the “dirty list” of employers using slave labor, following raids by prosecutors on two of his properties. In a lawsuit, the MPF alleged that Rosa kept the workers “in conditions analogous to slavery, since they were subject to sleeping in shacks under the protection of plastic tarpaulins, had precarious food and no drinking water, sharing the environment with venomous animals, living without any conditions of hygiene, and staying several kilometers away from their places of origin.” A verdict is pending in the case.

Contacted by Agência Pública, Rosa claimed there were no criminal charges pending against him, and that the slave labor lawsuit was the result of a “setup” by a former worker. On the fines and allegations levied against him by IBAMA, he said he had paid all the compensation required for the deforestation he had caused, and that there were no recent charges pending. Rosa also said he carried out forest clearing before the Forest Code came into force and tightened the permissible area of land allowed to be deforested.

The most fined mayor, and the most mayors fined

Among all the politicians fined for environmental violations in the Amazon, the record holder is the current deputy mayor of Alto Araguaia in Mato Grosso state: Freud Fraga dos Santos. A cattle rancher, he has been fined 13 times between 2012 and 2019, yet was still reelected alongside the city’s mayor, Gustavo Melo.

Freud was denounced in 2014 by the MPF in the state of Pará as a member of a gang of deforesters and land grabbers in Novo Progresso. According to the MPF complaint, the group invaded public lands, deforested and burned the areas to establish cattle pastures, and then sold the lands as ranches. According to the investigation, at least 15,500 hectares (38,300 acres) were deforested, resulting in environmental damage equivalent to at least 500 million reais ($96 million).

At the time, the Federal Police, IBAMA, the Brazilian tax authorities and the Attorney General’s Office considered the gang one of the most destructive in the Amazon.

“We don’t recognize his involvement in anything,” said Marlon Arthur Paniago de Oliveira, the deputy mayor’s lawyer in the case. “It is important to clarify that the judicial process is still in the court, and it is certain that he has never had any conviction in criminal proceedings of any kind, in any degree or jurisdiction,” he added.

Mato Grosso, besides having the politician with the most fines, is also the state with most candidates fined. In Colniza, on the border with Amazonas state, five of the 10 mayor-deputy mayor tickets in the November election had candidates with environmental fines. Most of these were for violations against vegetation and environmental control.

The problem isn’t just confined to municipalities in the Brazilian Amazon. The Agência Pública report found six candidates for mayor and deputy mayor in municipalities in other parts of the country were fined by IBAMA for violations committed in the Amazonian states. In total, 11 mayors and deputy mayors currently in office outside the Amazon have been hit with a fine in the region at some point.

Banner image of IBAMA personnel carrying out a raid in 2018 on an illegal mining operation in Tenharim Indigenous Territory in the state of Amazonas. The region is home to extensive forest massifs that are under pressure from criminal groups. Five politicians fined for environmental crimes were elected in the state in 2020. Image courtesy of Vinícius Mendonça/IBAMA.

This article was first published in Portugue by Agência Pública.