This article is the second in a two-part series on the future of Vietnam’s Mekong Delta. Read the first installment here.

Unlike many foreign experts, the Dutch participants in the Mekong Delta Plan (MDP) dialogue were patient and brought plenty of relevant experience to the table. They were able negotiators, too; though officials from Vietnam’s Ministry of Agriculture and Rural Development (MARD) and Ministry of Environment and Natural Resources (MONRE) are natural rivals, the Dutch were adept at keeping both sets of Vietnamese participants engaged in productive conversation.

The group reached agreement that the environmental health of Vietnam’s vast and hugely fertile Mekong Delta could not be sustained by deployment of an “ever-more complicated array of hydraulic works.” At the end of 2013, after four years of discussion, the experts signed off on a 126-page plan that was strongly biased toward adaptive rather than mechanical fixes.

In Hanoi, however, it was as though the MDP had disappeared into a black hole. From the perspective of high officials there, 2014 and 2015 weren’t a good time to make big policy decisions. Vietnam is a single-party state, and the Communist Party was preoccupied by an unusually bitter factional struggle.

Not until midway through 2016 could a set of new leaders focus on the experts’ proposals. As always, they did not share details of their internal debate with the media. However, late in 2017, two new documents signaled that the party-state had decided to embrace both the MDP’s prescriptive analysis and unusually close collaboration with foreign “development partners.”

The first of these documents was Government Resolution 120, policy guidance on “Sustainable and Climate-Resilient Development of the Mekong Delta of Vietnam.” Resolution 120 acknowledged, in effect, that the delta way of life is being hammered not only by climate change and the harmful effects of many dams being built far upriver, but also by the consequences of short-sighted government decisions in earlier times. A coordinated response was urgently required. It would be developed by the national authorities in accordance with the concepts laid out in the MDP.

The second document was a revised Law on Planning. As amended, the Planning Law mandated the Ministry of Planning and Investment (MPI) to implement multisectoral planning at the regional level. In other words, planners and policymakers were empowered to address the delta as a coherent whole. However, there was as yet no such entity as a “region” in Vietnam’s administrative structure. Regional institutions would have to be built from scratch.

Cross-sectoral planning is intuitively a good thing, but when local officials and political leaders have little experience in such cooperation, it is not so easy for them to bring about. Nor do Vietnam’s ministries have a tradition of cooperation. Agriculture, environment, transport, construction and other ministries have long done their business with minimal deference to other ministries’ goals.

Resolution 120 assigned MPI the job of making all this unaccustomed coordination happen, of converging the Dutch and Vietnamese discussants’ vision, that is, the MDP, into a “Mekong Delta Integrated Regional Plan” (MDIRP) that accommodated the agendas and working styles of the Vietnamese ministries. The work of making the MDP “more Vietnamese” proceeded slowly, despite looming deadlines for inputs to Vietnam’s new five-year Socioeconomic Development Plan.

In April 2019, Prime Minister Nguyen Xuan Phuc issued a 38-page “Action Plan” that, among other things, made quite clear his personal commitment to the materialization of a robust plan of work.

Foreign development partners were anxious nonetheless. Two months later, on the eve of a second Mekong Delta Plan Summit, 16 international organizations issued a bluntly worded joint statement. In his remarks at the meeting, World Bank resident director Ousmane Dioune underscored that the donor group was quite serious: “Looking ahead, we aim to mobilize at least $880 million to implement Resolution 120 … Any further support to the Mekong Delta will only make a difference if there are strong institutions, effective implementation, robust information, commitment to innovation, and involvement of all stakeholders.”

“The thinking being done,” Dioune added, “must result in a strong regional coordination institution that delivers effective and efficient vertical and horizontal coordination.”

Another memorandum, circulated by the German government’s aid agency, stressed that the coordination issue could only be solved if the prime minister intervened forcefully to resolve contentious issues (which, in fact, he had already done).

The politics of the Vietnamese party-state are rarely transparent. Vietnam is historically very touchy on matters of sovereignty and, as foreign advisers learn, there is a strong disposition to insulate domestic politics from outside interference.

The MPI’s Integrated Regional Master Plan is headed for its official launch as early as January 2021. By all indications it will be easily recognizable as a descendent of the 2013 Mekong Delta Plan. 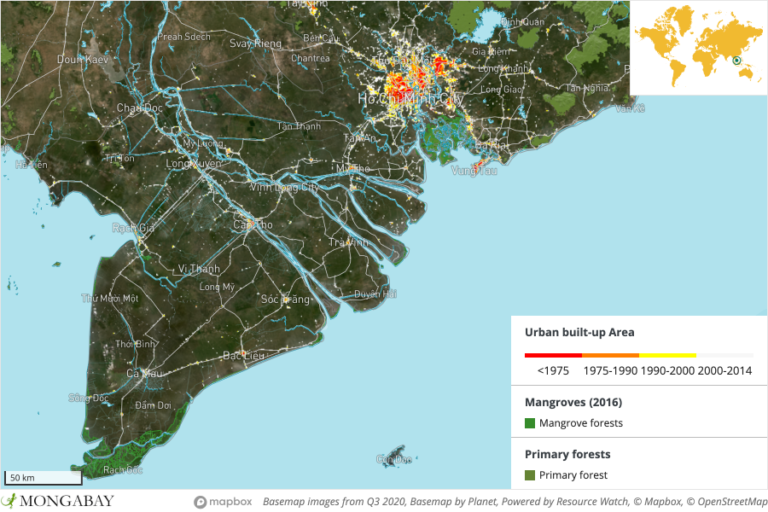 In another government decision in March of this year, Prime Minister Phuc approved a five-year plan for MARD that aligns closely with the Mekong Delta Plan. Then, in June, a Mekong Development Coordinating Council was established by prime ministerial fiat. Its chairman is a deputy prime minister, its vice chairman is the planning minister; and senior officials lead delegations from the 13 delta jurisdictions (12 provinces and Can Tho city) and five national ministries.

The ministries are in the habit of giving direction to province-level subordinates. They may expect the new regional councils to rubber-stamp decisions made in Hanoi.

For the delta regional council to function effectively, however, considerable institution building will be in order. Presumably it will be sited in Can Tho, the delta’s hub, rather than in far-off Hanoi. The council ought to have its own staff capable of analyzing complex data and preparing briefs that put council members on the same page, so to speak. The MDIRP draft is said to emphasize using “integrated data systems, information and decision support systems” to promote “transformative and climate resilient investments,” and the World Bank is putting substantial money into setting them up.

A framework, 71 pages of “development orientations” for the MDIRP, was released on July 14, 2020. The document is easy to read and, to this reader, persuasive. It is doubtless backed up by a wide shelf of dense data. However, it appears to have been very largely the work of foreigners under a contract between the Vietnamese government and a Dutch consultant, Royal HaskoningDHV. Assuming the best of will and genuine agreement on MDIRP objectives, Vietnamese officials and their foreign advisers will inevitably clash over details. Here, the wiser course for the foreigners will be to remember that it is the Vietnamese who must live with the consequences of the decisions that are made.

2020 has been another year of difficult weather in Southeast Asia. Rainfall was way below average in much of the region. In the Mekong Delta, the dry turn in the El Ninõ weather pattern has been aggravated by a second year of low flow in the river’s many branches — a phenomenon widely attributed to impoundment of water behind new dams upstream.

On the western edge of the delta, work on the first phase of the Cai Lon-Cai Be project is ahead of schedule. My expert friends say the project marks the end of an era. MARD’s hydrological engineers once ruled the delta. The hydrocrats have won a last battle, say the experts, but meanwhile they have lost the war.

That’s not yet a sure thing, I believe. Dike construction is lucrative; each project supports thousands of well-paying jobs. Rice exports may not put much money in farmers’ pockets, but they pay well for the state-owned companies that buy cheap and sell high. The ministries, in this case MARD and the Ministry of Construction, are in the habit of giving direction to province-level subordinates, and may expect the regional councils to rubber-stamp decisions made in Hanoi. Pressures and inducements from the hydrocracy and its allies in MARD will test the mettle of the new delta regional council.

Achieving a tolerable balance will be a learning process for all sides. Good outcomes will depend importantly on whether regional-level players can build and hold firm to alliances grounded in a clear view of local interests.

An early indicator of the Vietnamese regime’s ability to adapt its policies to more challenging conditions will be how it chooses to defend the delta seacoast.

In principle, MARD is moving away from fixed targets for rice and land use, permitting farmers more flexibility in choice of crops, promoting a policy of “living with floods and brackish water.” However, what MARD knows best how to do is build high dikes and sluice gate infrastructure — that is, to implement structural approaches to water management like the Cai Lon-Cai Be project launched last year on the delta’s southwest coast.

In the MDP vision, rice is no longer viable in the delta’s coastal regions, a zone where rising seas and withdrawal of fresh water from aquifers have in many places caused the land to subside below high-tide levels; where, during the dry season, saline water now penetrates far inland, and in the wet season the rivers no longer deliver great quantities of sediment.

Rather than raise and reinforce the now ragged system of coastal dikes, rather than pump aquifers dry and multiply the sluice gates that impound polluted water, the MDP envisions the regeneration of mangrove forests extending back from the coasts for several kilometers. The salt-tolerant, sediment-trapping trees will in addition provide habitat for free-range shrimp. And, inside the regenerated mangrove barrier, land once dedicated to rice cropping will now be ponded and produce ever more shrimp. That’s a happy prospect, but one still a long way from realization.

In the decade since the Dutch government first proposed to share its flood management experience with Vietnam, the Mekong Delta Plan has grown into an experiment in land and water use management on a grand scale. It is well worth watching, and not only for evidence that Vietnam is capable of making choices that maximize long-term environmental and economic benefit. Close observers can also, doubtless, find takeaway lessons that will be applicable, in the right policy environment, to managing any number of climate change scenarios.

Since 2008, David Brown, a retired U.S. diplomat, has written extensively on public policy issues in Vietnam. While writing these articles on the Mekong Delta, he received invaluable assistance from a number of expert practitioners there. Any errors of interpretation should be attributed to the author, and not his sources. Brown welcomes serious inquiries about his articles for Mongabay. (Write to him here: [email protected]).