Analysis: How Vietnam came to embrace a new vision of the Mekong Delta’s future

On any list of places menaced by climate change, Vietnam’s broad and fertile Mekong Delta ranks near the top. And yet, as I wrote for Mongabay four years ago, rising seas and changing weather patterns are not the only threats to the delta’s fabled fecundity.

A spasm of dam building upstream in Laos, China and Vietnam’s own Central Highlands has suppressed the annual floods that until recently brought great quantities of nutritious sediments to the delta and flushed out brackish water. And then there’s institutional inertia: Vietnam has been slow to abandon a four-decade policy focus on maximizing rice production.

Perhaps change has been slow because Vietnam’s “rice first” policy worked so well at the end of the last century when, desperate for export earnings, the nation invested heavily in dams and dikes to tame the annual floods so that farmers could grow two and in some places three crops of rice annually.

Those investments ensured the nation’s food security. By the late 1990s, Vietnam was challenging Thailand as the world’s No. 1 rice exporter. Invested in manufacturing, earnings from rice exports speeded Vietnam’s transformation into a very competitive producer of goods for world markets.

It shouldn’t be a surprise, perhaps, that planners, politicians and particularly the Ministry of Agriculture and Rural Development (MARD) were slow to acknowledge that the rice-first policy was becoming unsustainable. Nor did they see that the huge investments in dams and dikes designed and built to maximize rice production reduced the delta’s hydrological resilience and the ability of its farmers to profit from changes in the natural environment.

And yet, when I visited the delta for several weeks in the summer of 2016, it was already clear that things had to change. The fourth and last of my reports in 2016 ended on a hopeful note: senior officials in Hanoi and in the delta were studying a proposal that had emerged from several years of discussion among Dutch and Vietnamese experts.

Known as the Mekong Delta Plan (MDP), it emphasizes adaptive measures in place of an “ever more complicated array of hydraulic works.” It is impressive in its clarity. In summary: 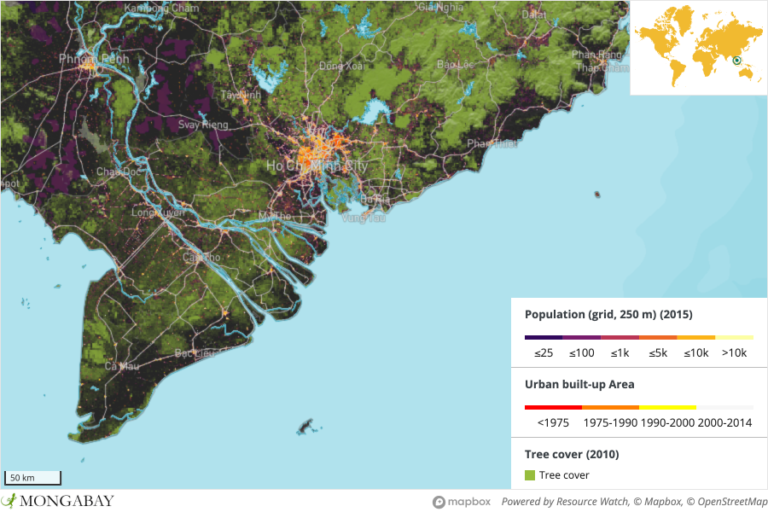 This autumn, locked down at home in California by the pandemic, I read in Vietnamese media that work had begun on the Cai Lon-Cai Be Project. The CLCB is the Ministry of Agriculture’s answer to the infiltration of seawater into the rice fields that stretch along the western side of the Mekong Delta as far as the eye can see.

When the CLCB was conceived, rising seas, depleted aquifers and changing weather patterns were not yet a recurrent threat to the delta’s agricultural economy. Written into Vietnam’s 2010 Five-Year Plan, the CLCB was just one more big job for the ministry’s hydrological engineers, the team that had tamed the Mekong’s annual flood pulse.

The Vietnamese news outlets also reported widespread skepticism about the CLCB project. An independent expert accused MARD, among other things, of using fear of climate change impacts as a bogeyman to sway public opinion in favor of a massively overengineered and poorly researched “solution.” A professor argued that the problem was not brackish water but rather MARD’s obsession with growing rice instead of cultivating other crops, shrimp and fish that are suited to local conditions.

Nguyen Ngoc Tran, who’d led a seminal survey of the delta’s hydrology in the 1980s, chided MARD for ignoring the government’s Resolution 120. He was referring to guidelines on “Sustainable and Climate-Resilient Development of the Mekong Delta” that had been issued in November 2017 after extensive discussion by Vietnam’s top leaders.

In Tran’s view, Resolution 120 established a clear preference for smart, flexible, “nature-friendly” responses to changing climatic conditions. The CLCB project instead would invest in “structural measures” that could not be easily undone. “If we keep putting patches here and patches there before we are sure that our solution is right,” Tran argued, “we’ll simply do more damage to our environment.”

A senior MARD official snapped back. The way he saw things, academic experts ought to be helping the ministry to mitigate negative effects, if indeed there were any, instead of opposing the whole CLCB irrigation project.

Was this, I wondered, evidence that the Mekong Delta Plan is just so much hopeful talk? By email, I checked in with some of the local experts I’d met four years earlier.

Not at all, they answered. Parallel to the CLCB hydroengineering project, important elements of the MDP were already being implemented.

In the upper third of the delta, farmers in the An Giang Quadrangle and Plain of Reeds areas are delighted that triple cropping of rice has been abandoned. The high dikes have been breached, restoring a vast freshwater flood plain.

In the central zone of the delta, MARD no longer insists that farmers grow a spring rice crop; they are allowed instead to grow crops that can withstand the salty water that now infiltrates up to 80 kilometers (50 miles) from the river mouth. However, orchards are suffering, and increasing year-round availability of fresh water is an urgent objective.

And, in the delta’s lowest third, a heated argument continues between those who insist that large tracts can be preserved as rice fields and those who believe that brackish water aquaculture is the key to the prosperity of the coastal strip. The MDP tilts strongly in favor of reestablishing mangrove forests along the delta’s long coastline and, behind this “soft” barrier, giving priority to high-value-added shrimp farming.

Fresh water is now a scarce resource in the Mekong Delta. Near the coast, aquifers are severely depleted and, behind the sluice gates, canals are polluted. In the central area, also, surface water is now brackish for much of the year. Much planning therefore centers on trapping fresh water in upstream areas during the wet season and, in the dry season, steering it to thirsty sectors downstream.

My sources — professors at the University of Can Tho, a freelance environmental consultant, and expat staff of the IUCN — say there is already considerable informal buy-in to the MDP. At the local level and also at high levels of the Vietnamese government, the plan is generally considered to make a solid argument for flexible adaptation to stresses on regional fertility. Even though the MDP represents a sharp break with established practice and has a foreign parent, its logic has been compelling.

For the Vietnamese and their Dutch colleagues, the MDP process is not just about the environment, but also about how a deteriorated environment weakens the delta’s economy and its social development. Recent scholarly research confirms that already in 2016, “the MDP [had] indeed been influential in introducing new ways of thinking about both delta problems and transformative strategies for agribusiness development. Minds have changed at all levels of the planning system, though change at the local level remains most limited. Implementation is fragile, however.”

What seemed most doubtful then and remains uncertain now is whether the approach that the experts have urged can be made compatible with Vietnam’s rigid, top-down style of policy planning.

How rigid? Consider the CLCB, a project conceived some 15 years ago. If there’s wide agreement that it no longer fits the circumstances, why hadn’t it been called off, I asked my expert sources.

“Frankly,” said one, “we made a pragmatic decision. The CLCB’s first stage was funded. It had momentum. Rather than continue to fight that one and lose, we decided it was more important to press for the integration of the MDP into the next five-year plan.”

This article is the first in a two-part series on the future of Vietnam’s Mekong Delta. Read the second installment here.

Banner image caption: A farmhouse sits on stilts above a flooded rice paddy in the Mekong Delta. Photo by Daniel Hoherd/Flickr

Since 2008, David Brown, a retired U.S. diplomat, has written extensively on public policy issues in Vietnam. While writing these articles on the Mekong Delta, he received invaluable assistance from a number of expert practitioners there. Any errors of interpretation should be attributed to the author, and not his sources. Brown welcomes serious inquiries about his articles for Mongabay. (Write to him here: [email protected]).