KAMPALA, Uganda — Two sugarcane companies have begun clearing thousands of hectares in disputed sections of Uganda’s Bugoma Forest. The National Forestry Authority (NFA) is challenging land titles granted to Hoima Sugar Limited and MZ Agencies, but a series of court defeats has forced the authority to remove its guards.

Bugoma Forest spans 40,000 hectares (99,000 acres) along the northern tip of the Albertine Rift Valley, which divides Uganda and the Democratic Republic of Congo. It is home to around 500 chimpanzees and is one the most biodiverse forests in the country.

Mechanical graders began clearing 2,400 hectares (5,900 acres) of land to plant cane for Hoima Sugar here in August, after the National Environment Management Authority, a separate government department from the forestry authority, approved an environmental impact assessment. MZ Agencies employees with chainsaws began cutting down trees in another area in May, though no EIA has been approved for that company’s project.

Under the 1998 Land Act, forest reserves like Bugoma are held in trust for the “common good of the citizens of Uganda” and may not be leased out or sold by the government.

But in August 2016, the Bunyoro-Kitara Kingdom, one of five traditional kingdoms which hold autonomous powers to the central government in Kampala, successfully claimed 5,700 hectares (14,100 acres) here as ancestral land. Just four days later, the kingdom transferred title to this land to Hoima Sugar.

Hoima Sugar has controversially leased other land near Bugoma Forest: between 2014 and 2015, Ugandan police forcibly evicted thousands of people from communally held lands to make way for the company’s sugarcane plantations and processing facilities.

The NFA, the government agency that manages Uganda’s forest reserves, took the Bunyoro-Kitara Kingdom and Hoima Sugar to court to oppose the latest leases. But in April 2019, the NFA lost the case and was ordered to withdraw its security agents who were guarding the land. With the August approval of an EIA, the path was clear for Hoima Sugar to go ahead with its plantation.

In a separate court case filed in September 2019, MZ Agencies sued the NFA for obstructing its property rights over a different piece of land 5 kilometers (3 miles) to the east.

The cases of Hoima Sugar and MZ Agencies in Bugoma Forest are just two among many disputed land titles issued in Uganda’s environmentally sensitive ecosystems. “We have cases across the country in different central forest reserves,” said Moses Muhumuza, the NFA’s legal manager.

“Issuing land titles in protected areas is a big problem,” said Tom Obong Okello, executive director of the NFA. “People create titles and then they run to court and they get injunctions, and you cannot do anything.”

Dennis Obbo, a spokesman for the Ministry of Lands, said the ministry had cancelled more than 500 titles in forest reserves and other ecological systems. “The NFA has not taken steps to survey and demarcate the forest reserves, despite recommendation to do so. In a number of instances the Government Surveyors have assisted NFA to reopen the boundaries of the forests they manage … As long as the NFA continues this blame game, it shall not effectively protect the forest reserves.”

MZ Agencies initially laid claim to land here in 2016 on the basis of an authorization letter from the Bunyoro-Kitara Kingdom’s governing body. The kingdom later distanced itself from this, but the company acquired freehold land title over the parcel in September 2018. A year later, MZ Agencies sued the NFA and Okello for violation of property rights to the land. The court ordered the NFA to remove security forces who had been guarding the disputed area.

“On 23rd May, MZ Agencies took over the area that they are claiming and started clearing the forest with chainsaws,” said Constantino Tessarin, who runs an ecolodge in Bugoma Forest. “This is a key area for conservation. In fact, it’s an area with chimpanzee and mangabey nests.”

The company began clearing this area even though an environmental impact assessment has yet to be completed.

MZ Agencies was unavailable for comment at the time of writing. 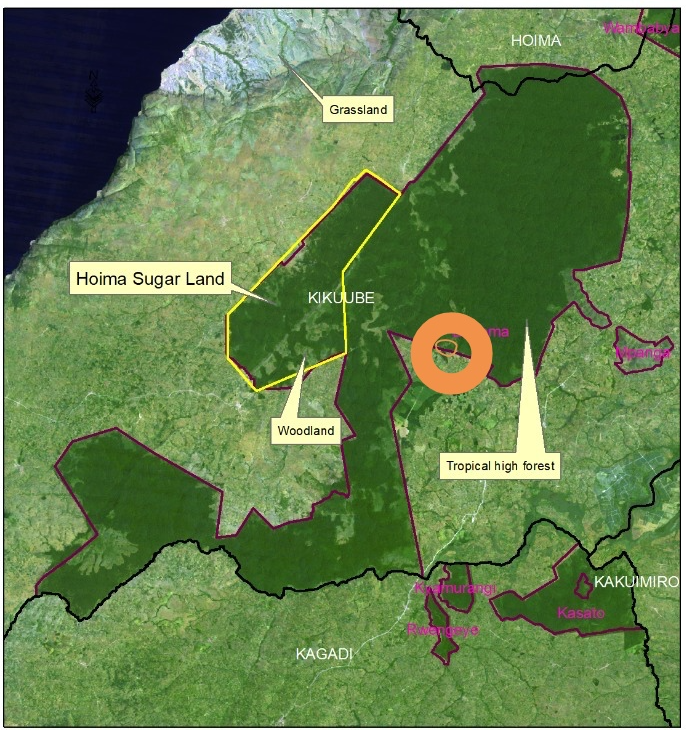 The role of the environmental management authority in Bugoma has been heavily criticized.

A spokesperson for NEMA confirmed that MZ is proceeding without an EIA, but said it’s the responsibility of the NFA to take action against the encroachment.

For the EIA issued for the nearby parcel of land claimed by Hoima Sugar, opponents say NEMA failed to carry out comprehensive consultations with local communities and other stakeholders.

“They should have consulted more people. It’s a very sensitive place,” Okello said.

“NEMA participate in the destruction of our environment,” said Dickens Kamugisha, CEO of the Africa Institute for Energy Governance, a Ugandan NGO. “They are no longer interested in serving the common good, they are just interested in using those offices to make wealth.”

A coalition of Ugandan NGOs have filed a High Court injunction against NEMA and its approval of the project, and as such NEMA declined to comment on these allegations. But in a press statement, NEMA said sugarcane would only be planted on part of the 5,700-hectare area acquired by Hoima Sugar, “on an area that was entirely grassland.”

“A forest is not trees alone, it is an ecosystem where you find a mixture of vegetation,” said Gaster Kiyingyi, a member of the Save Bugoma Forest activist group. “You don’t just pull grasslands out of the ecosystem and say they are useless.”

“The whole thing is misleading,” Kamugisha said. “Hoima Sugar Ltd just want the certificate of approval so that they can go into the forest and cut. In time they’ll go back to NEMA and say that the whole area has no trees.”

Sheila Nduhukire, a spokeswoman for Hoima Sugar, said this was a “false presumption” and that NGOs were presenting “alternative facts to what the High Court and, indeed, our lease agreement with Bunyoro Kingdom says.” According to NEMA and Hoima Sugar, the land area falls outside Bugoma Forest reserve. Yet the environmental impact assessment notes it is “of great concern” how Hoima Sugar’s activities will affect several rivers that are fed from this area.

“When people are cutting down the forest they are thinking in the short term, and they don’t look at the big numbers that benefit from the natural forest,” said Beatrice Rukanyanga, an ecofeminist who lives close to Bugoma Forest.

“This is an anticipated catastrophe which will be regretted for so many years,” Rukanyanga said.

Campaigners continue to protest against the clearance of Bugoma Forest. Three journalists and six environmental activists were arrested by police in the nearby town of Hoima on Sept. 16, but were released the same week.

“Charges are rarely pressed after the arrests, and people are not prosecuted,” said Romain Ravet, country director of Avocats Sans Frontières in Uganda. “This could indicate that the arrests are done without proper cause, and thus primarily aimed at intimidating and neutralising human rights defenders.”

Banner image: Trucks loaded with sugar cane on one of the dirt roads around Bugoma Forest. Image by Thomas Lewton for Mongabay.