A Malagasy community wins global recognition for saving its lake

by Malavika Vyawahare on 18 November 2020

For centuries, Lake Andranobe in Madagascar’s central highlands has nourished the surrounding communities. Over the past 16 years, its dependents have come together to restore the ailing lake. Now, that community-led initiative, the organization Tatamo Miray an’Andranobe (TAMIA), has won the United Nations Development Programme’s Equator Prize this year in the “Nature for Water” category.

“I am happy that the efforts of the community have been recognized,” Henri Rakotoson, a fisher and president of TAMIA, said about the award. “The prize gives us hope to go on.”

While the accolade has buoyed villagers, what has sustained their campaign are rewards from the lake itself. Fish catches more than doubled, from 8 tons in 2014 to 20 tons in 2019, according to data TAMIA collected. That has allowed Rakotoson, like many in nearby villages, to send their children to bigger towns for higher education. “One of my sons is pursuing a degree in environmental studies,” the 48-year-old told Mongabay.

Anchoring the future hasn’t been easy. When the association was formed in 2004, Lake Andranobe was in dire straits. Fish stocks were falling, the lake’s watershed had shrunk dramatically, and vanishing green cover meant water levels never recovered.

To revive the water body, spread over 90 hectares (220 acres), the villagers have had to curtail access to a resource that was once essentially free. They enforced fishery closures and rules on fishing gear and capture of juveniles, and regulated water uptake for crop irrigation.

“Madagascar’s wetlands support an incredible biodiversity,” said Tomos Avent, head of international programs at the U.K.-based Wildfowl & Wetlands Trust (WWT), adding that they are disappearing faster than the country’s vaunted forests. Since 1960, more than half of the wetlands dotting the island’s expansive high plateau have vanished.

A wetland is not just a lake; it is any ecosystem where water dominates and defines the landscape, including mangroves, marshes, and river deltas. These are vital and accessible stores of the Earth’s freshwater, most of which is locked away in remote ice sheets.

Globally, biodiversity is declining in freshwater ecosystems faster than in oceans or forests; an estimated one in three freshwater species is at risk of disappearing, WWF’s 2020 Living Planet Report warns. Over the past century, two out of every three wetlands have ceased to exist, cleared and filled in for farmlands, industrial zones and cities.

Even where they haven’t been displaced, these vibrant living ecosystems are boxed in. The condition of a wetland can serve as a barometer for the health of the surrounding environment, because everything from overfishing to mining to climatic change impacts water bodies.

Yet, global conservation strategies often overlook these terrestrial blue pockets. The loss of forests to farming and fires is well documented, but disappearance of wetlands has gone largely under the radar. What receives even less attention is the link between the two. Disappearing forests are a bane for wetlands. Trees bind the earth together, allowing it to soak and guide water through the catchment areas of water bodies. Without them, water tumbles away, stealing fertile topsoils, impoverishing the land, and silting up lakes and rivers.

That’s what happened at Lake Andranobe, which lies on the outskirts of one of Madagascar’s major cities, Antsirabe, amid a rapidly urbanizing landscape. Over the years, woodland in the lake’s drainage basin gave way to cropland and settlements, choking off water supply and increasing silting. Scant vegetation fringes the lake, and people are packed densely around the landscape.

By planting trees in surrounding areas and keeping a watchful eye on the saplings, TAMIA has reduced silting in the lake by half. Earlier this year, villagers planted 200,000 saplings as part of a government-supported national drive.

TAMIA’s successes highlight the benefits of a community-led approach, one that is enshrined in Malagasy law but is unevenly employed across the country. A 1996 law, known as GELOSE, aimed to give local people greater power to manage nearby forests, marine areas, and wetlands. It is implemented through contracts between the central government, local authorities, and communities represented by associations called Vondron’Olona Ifotony (VOIs). TAMIA is a VOI. 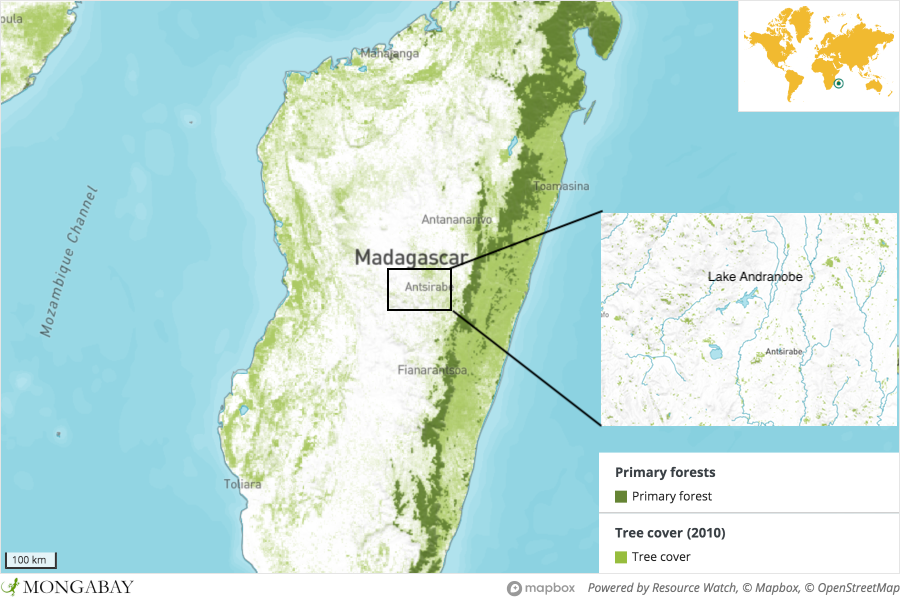 After Madagascar decided to triple its protected-area network in 2003, VOIs mushroomed across the island in a bid to make sure conservation projects had community input and buy-in. In 2012, a network of these organizations called Tafo Mihaavo was formed, of which TAMIA is a member. More than 580 communities are now part of the network, overseeing nearly 3 million hectares (7.4 million acres) of forested land.

Though such arrangements recognize communities’ customary rights of use, land ownership remains with the state. As is common practice, TAMIA was initially granted a contract of four years to manage Lake Andranobe and the nearby 40-hectare (99-acre) Ambohitsokina forest. It later signed a 10-year pact, which was renewed last year for another decade.

“Communities can plan for the long term, and there is greater assurance that the sacrifices they make today will yield benefits for them in the future,” Avent said, highlighting the advantages of long-term contracts.

The backbone of this kind of management is the dina, a set of traditional laws that often govern land use and are recognized under GELOSE as a tool for governance. VOIs implement the dina and create new rules where necessary. These may or may not enjoy legal backing, but communities usually respect them. A 2010 study estimated that more than 60% of Malagasy people were subject to local dina conventions.

TAMIA was founded with 90 members; this has increased to 420 today. The general assembly of all members meets twice a year to make decisions. A management plan is prepared every year through a consultative process. The association works with local authorities to implement the dina and, in some cases, with a branch of the armed forces called the gendarmerie.

There are 150 fishers in the association, who each pay an annual fee of 6,000 ariary ($1.50) for access to the lake. Membership is not cheap; most Malagasy people live on less than $2 a day. But TAMIA is only the center of an ecosystem created to benefit the villagers. A fishing cooperative ensures steady demand for their catch. The cooperative buys all fishing products at a fixed price, sells it at a markup, and pumps the profits back into the community, with the VOI deciding what activities to fund, ranging from improving agricultural practices to planting trees.

All villagers living around the lake, even those who are not part of TAMIA, can use lake water for drinking, washing, and watering their livestock. About 3,500 people depend on the lake for drinking water. A water-use association oversees the diversion of water to fields, with farmers paying per hectare of land irrigated. Lake water irrigates about 420 hectares (1,040 acres) of farmland, an area larger than Central Park in New York City.

Infractions invite fines, and if the alleged offender does not defer to the VOI, the association can approach the gendarme. In the past 16 years, the gendarme has been called in on only two occasions, according to Rakotoson.

TAMIA also has a women’s group that focuses on training villagers, mostly women, in making handicrafts and spearheads the tree-planting campaigns. “There was a kind of mindset change; the community members and their children are more aware of protecting their environment and contributing to all activities led by the VOI,” said Miraniaina Raharimalala, a member of the group.

Children’s education is a high priority for TAMIA. It has earmarked part of the $10,000 prize money from the Equator Prize for improving schools in the area and raising awareness about protecting the lake among the younger generation, Raharimalala said.

However, awareness is only part of the equation.

To effectively protect a lake or a forest means having timely information about its health and the pressures it faces. Enforcement requires time and labor. All of that requires money. TAMIA is fortunate in that sense. The organization has benefited from small grants from the Global Environment Facility, administered by the UNDP via a program launched in 2005 specifically to support community-led endeavors. TAMIA has received about $80,000 in grants from the program, directly or through Tafo Mihaavo.

“It is hard to make a VOI self-funded,” said Andrew Bamford, a researcher at WWT who published a paper on Madagascar’s wetlands in 2017. “It is effectively taxing people to use the natural resources. It can restrict access to the resources … But, if you have a lake that is massively overused, people will pay to access it. It can be effective if people see improved fish catch as a result of the VOI’s actions.”

Financing these initiatives is an enduring challenge in countries like Madagascar, which, despite its natural riches, is poor in terms of income. There are 21 Ramsar sites in Madagascar, wetlands recognized for their ecological importance. However, many of the 21 sites lack site management plans. The National Ramsar Committee in Madagascar itself faces a funding shortage and has been inactive for many years.

A high-profile species rescue and the patronage of external actors can help attract resources. Lake Sofia in northwestern Madagascar, a Ramsar site, is one of two locations where the endangered Malagasy pochard is found today. A decade ago, the ducks were on the brink of extinction, a motley flock of 20 occupying a remote waterbody near Lake Sofia. WWT worked with two other international charities, the Durrell Wildlife Conservation Trust and The Peregrine Fund, as well as the Malagasy government to save them. They collected eggs, reared the ducklings in captivity, and released them at Lake Sofia in 2018.

Though the big international players took the lead in securing the birds, the onus of managing their new home lies with three VOIs, which received a new lease of life with the pochard project. WWT hopes that the VOIs will be able to function independently in the future and Lake Sofia will emerge as a model for protecting Madagascar’s wetlands.

A homegrown VOI like TAMIA is still a rarity in Madagascar. “One of the more remarkable things is that it is a grassroots VOI,” Bamford said of the association. “Usually VOIs are set up by foreign NGOs and a lot of them don’t work, sometimes, for that very reason. What Madagascar needs are organically-grown VOIs.”

While VOIs are fundamentally an attempt to decentralize governance of resources, their existence in no way eliminates the need for an overarching national strategy. There are challenges that communities cannot take on themselves, for example, from a changing climate. Fish catches from Lake Andranobe declined in 2018, which Rakotoson blamed on poor and erratic rainfall linked to climate change.

WWT worked with the Malagasy government to develop national guidelines for wetlands, released in 2018. A national wetland strategy expected to be launched on Feb. 2, World Wetlands Day, will focus on building a knowledge base about wetlands in Madagascar and also explore how to deal with the effects of climate change. Avent said he hoped it will be used by policymakers, local wetland managers, and stakeholders in related sectors like agriculture, industry, and health and sanitation.

(Banner Image: A meeting of TAMIA members on the banks of Lake Andranobe in 2016. Image courtesy of TAMIA.)