For nesting hawksbill turtles, this Philippine community is a sanctuary

MISAMIS ORIENTAL, Philippines — For hundreds of years, the lives of fisherfolk along the sleepy coastal villages in the town of Candiis in the Philippines’ Misamis Oriental province have been intertwined with the hawksbill sea turtle (Eretmochelys imbricata).

The hawksbill is one of five marine turtle species found in the Philippines. It’s classified as critically endangered on the IUCN Red List, with its population declining by 80% over the past 10 years.

The long, dark shoreline of Candiis has always been a hawksbill nesting site. With the turtle’s numbers dwindling dramatically in the wild, the local community has stepped up to protect the eggs and the hatchlings.

“This is unique because throughout [the region], it is only in this town that we have recorded several hatching sites for hawksbill sea turtles,” says Donato Bojo, a zoologist with the Department of Environment and Natural Resources (DENR). “And this phenomenon did not just happen overnight. This means that these sea turtles had been nesting on this area for hundreds of years.” 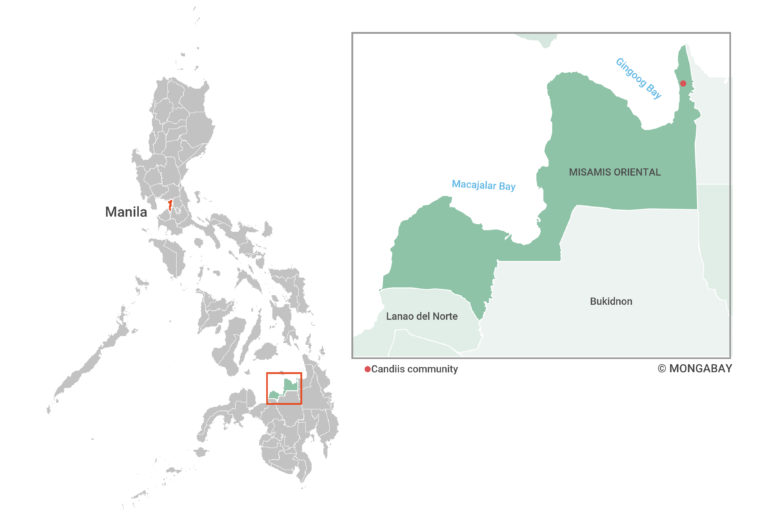 Sea turtles’ memories are imprinted with a magnetic “map” of the sandy beach where they hatched. This gives them the unique ability to return to that same site decades later to repeat their ancient nesting ritual.

In Candiis, they’ve returned year after year, continuing to arrive even after houses began springing up along the shoreline. Their continuing presence in the area — and the need to address possible threats posed by the growing human population — led the DENR to include Candiis in a designated 612-hectare (1,512-acre) critical habitat for hawksbill sea turtles in 2012.

“Every year we have recorded about three to as much as six individual hawksbill turtles nesting along our shoreline which we closely monitored,” says Rolando Pagara, a Candiis council member and the official in charge of the turtle conservation areas. The mother turtles are such frequent visitors to the community that locals can recognize each individual animal, Pagara says.

“With the vast coastal area, I’m sure there are other parts that we have not been able to monitor and examine as most of the nesting happens in the evening,” he says. “While it may sound insignificant to others, the nesting in our shorelines is actually a very unique case.”

But the number of nesting sites is diminishing. Town records list five hawksbill turtle nesting sites between January and September 2018. While this is an improvement in 2017, when only three sites were recorded, it’s far from the 10 to 15 nesting sites per year recorded from 2000 to 2005.

Pagara says he fears the decrease is due to the increase of houses built near the beach. “Residents noted that there were several instances that the turtles were spooked by the dogs and in some instances, there was either something blocking the beach like a concrete structure or other man-made obstacles that pushed the nesting turtle back into the sea,” he says.

The hawksbill turtles aren’t deterred by the traditional stilt houses of the fisherfolks, which they can crawl underneath to dig their nests. Pagara once found a nest with more than 100 eggs lying in the space between the stilts under a fisherman’s house, hidden from the sight of the stray dogs that roam the shores.

Pagara’s team put up an enclosure to protect the eggs, and while this worked to keep the dogs from sniffing around, it was unable to completely protect the eggs from the tides. By the time the eggs hatched, only half survived; the rest were spoiled by the waters.

The Sea Turtle Conservancy, a U.S.-based non-profit, says that because sea turtles use both marine and terrestrial habitats during their life cycles, the effects of climate change, including sea-level rise, are likely to have a devastating impact on these threatened species and their nesting sites.

Already low-lying coastal areas around the world are being lost to the sea: beaches are vanishing and ecologically productive wetlands and barrier islands are being damaged. In the Philippines, government agencies and experts anticipate a 20-centimeter (8-inch) rise in the sea level every year.

Pagara says the phenomenon is already being felt in villages. “On July 12 and 13, 2019, there was a sudden increase in the tides all over the Misamis Oriental coastline which spurred a 2.4-meter-high [9-foot] tide that hit our turtle nesting sites,” he says. “Sadly, only 40 out of the 153 eggs at that time hatched, and we were able to release them early morning on July 23, 2019.”

Virgilio Alemana Jr., the coastal management chief of the Community Environment and Natural Resources Office (CENRO) in Gingoog City, also in Misamis Oriental, says his team has been monitoring an increase in the number of spoiled turtle eggs since 2018 because their nesting places have been flooded. He says that while the population of adult sea turtles nesting along Misamis Oriental’s coastline is stable, the decline in the number of hatchlings is a cause for concern.

In August 2019, an entire sea turtle nesting site in the nearby town of Salay town was flooded by the tide, spoiling all the eggs that were supposed to hatch the following month. In the municipality of Magsaysay that same period, only 50 out of 115 eggs produced hatchlings at the nesting site there. In July that year, only five hatchlings were produced out of 120 eggs. In another nest, it was 40 out of 153; all of the nesting sites showed signs of rotten eggs after tides left them waterlogged.

“An increase in nesting beach temperatures also has an impact on sea turtles,” Pagara says. “Because sea turtles are reptiles, they rely on the temperature of the sand in which the eggs incubate to determine the gender of the hatchling in a nest.”

Braving through the lack

The fisherfolk group that used to look after the marine protected area has also disappeared over the years, with most members focusing on fishing instead of looking after the turtles. The lack of an organization on the ground has in turn made it challenging for conservation groups to implement projects in the community.

Despite this, the community created a patrol unit to comb through the beaches to protect turtle eggs. But with mouths to feed at home, they’ve had to dedicate less time protecting the eggs and more time fishing. “Unfortunately, most of our volunteers also need additional support for their livelihood to sustain their families,” Pagara says. “Monitoring these areas requires a huge amount of time and effort. This takes away the valuable quality time of our volunteers who are also fishermen.”

Aside from the lack of funding, there have also been drastic changes along the coastline of Misamis Oriental: developers have put up private resorts in the area, replete with artificial rock formations and fenced-off coastlines that block the areas where the turtles must pass through on their way to their nesting sites. The more modern houses built along the coast no longer stand on stilts, but sit on concrete foundations that make it harder for the turtles to find a location to lay their eggs.

“While climate change is a factor, other factors such as beach armoring or creating artificial rock formation and fencing along the beach have changed the area,” says Ranoray Love A. Noro, a local section chief for the DENR. “Land use like beach resorts on a critical habitat should be considered illegal.”

Educating the locals is also a challenge, Noro says. “How much of [the information campaigns] have really been absorbed and implemented in the community and among stakeholders?” he says. “Sometimes because of the hard life and lack of alternative livelihood, some of the members of the community are pushed to practices that are detrimental to the existence of our sea turtles.”

Pagara says that even though most of the fishermen know it’s illegal to hunt and catch turtles, he still gets reports of dead turtles washing ashore without the shell: a highly-prized commodity on the black market.

But despite these drawbacks, Pagara and his community continue to look after their turtle neighbors in this critical area, saving them one nest, one egg, at a time. They see the turtles who return here year after year as part of the community.

“The support and efforts from non-government organizations might have slowly died out,” Pagara says. “Yet we remain hopeful that we can continue this cause and be able to preserve these creatures for the next generations.”

On March 22, Pagara discovered two new nesting sites, reported by villagers who said they discovered large turtle tracks along the shore that same morning. The group meticulously placed a protective makeshift barrier around the area.